At least 14 Conservative MPs, including several ministers, cabinet minister Michael Gove and a number of prominent Tory commentators joined Parler, the social media platform favoured by the far right that was forced offline last week for hosting threats of violence and racist slurs.

Parler was taken offline after Amazon Web Services pulled the plug last Sunday, saying violent posts and racist threats connected to the recent attack on the US Capitol violated its terms.

Analysts from the London-based Institute for Strategic Dialogue (ISD) said that Parler had become a platform where the ideas of mainstream Conservative MPs coalesced with those of extremists.

Milo Comerford, senior policy manager at ISD, said: “By positioning themselves as a safe haven for free speech and an alternative to the alleged ‘liberal bias’ of social media giants such as Facebook and Twitter, platforms like Parler attracted a motley crew of ultra-libertarians, violent extremists and conspiracy theorists, as well as more mainstream ‘free speech fundamentalists.’”

At least nine of the Tory MPs on Parler joined the platform in an apparent show of support for free speech following Donald Trump’s clashes with Twitter over remarks he made following the death of George Floyd in Minnesota last year.

The social media giant warned that one of Trump’s tweets “glorified violence”, the first time it had applied such a warning on any public figure’s tweets. Twitter’s row with Trump prompted a campaign by American rightwing voices to move en masse to Parler, which encouraged Trump followers to join on 15 June with a declaration for internet independence.

Other Tory MPs to join Parler on the same day as Hopkins include Mark Jenkinson, who last year alleged that food parcels were sold or traded for drugs in his Cumbrian constituency without offering any proof, trade minister Ranil Jayawardena and Lewes MP Maria Caulfield. 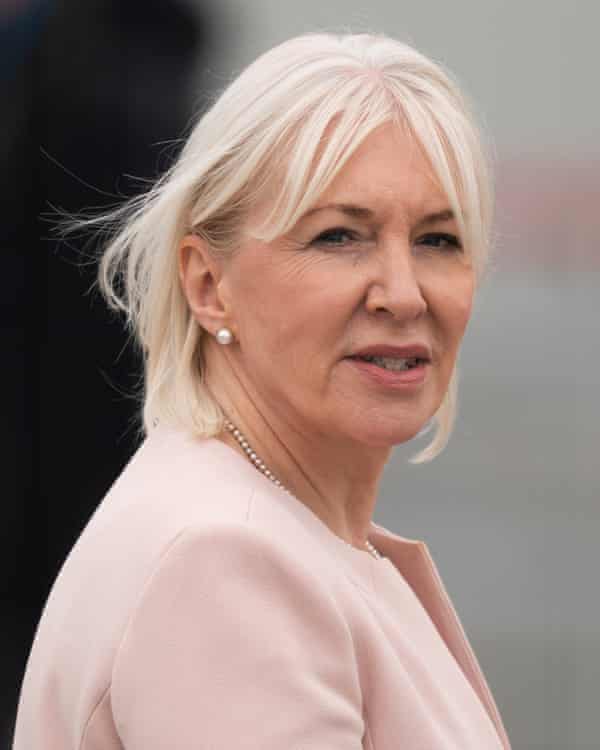 Health minister Nadine Dorries joined Parler on 21 June. Both Caulfield and Dorries had weeks earlier been reprimanded by Downing Street for sharing a video from a far-right Twitter account that falsely claimed Keir Starmer blocked the prosecution of grooming gang members when he led the Crown Prosecution Service.

The most prolific Tory MP on the site was Bradley who sent 52 “parleys” and had more than 12,000 followers. Gove sent at least 26 parleys and had more than 5,000 followers. There is no evidence any Conservative MP posted anything untoward or what might be considered extremist or far right. Some of the accounts had been hardly used and some of those activated in June 2020 appear to have been set up only to support the free speech protest.

Other notable Conservative figures on the site include pro-Brexit campaigner Darren Grimes. In June he told his followers on Parler that “it’s about time we fought back against big tech’s assault on free speech, free expression and freedom of association”.

Comerford added: “Platforms like Parler must be understood as part of a broad online extremist ecosystem, ranging from mainstream social media platforms, imageboard sites like the chans, to encrypted-messenger apps like Telegram, all of which play roles in helping extremists to mobilise, organise and propagandise.”

Zlatan will miss at least 10 days due to a hip injury. The game with Manchester United - March 11
Moriba on hugging Messi: With the greatest of all time 🐐 😍
After four Champions League wins, Bale is still in doubt. It's hard to accept. Davies on Gareth
Barcelona about the search of offices: We provide full cooperation to the police. We respect the judicial process and the presumption of innocence
Danny Murphy: The race for the Premier League title is over. Man City is ruthless. Now there is only a fight for the top 4
Pep Guardiola: Garcia will play for Barcelona. Eric-top player
Ex-President of Barcelona Bartomeu and 2 other people detained in the case of Barcelonagate
Source https://www.theguardian.com/politics/2021/jan/17/revealed-tory-mps-and-commentators-who-joined-banned-app-parler