Anna, a well known Bradford character, was tall and well-built, with a distinctive deep voice, and wore an assortment of badges on the lapels of her jacket. She was a regular presence in the city’s markets, particularly John Street Market, where she’d hang around, helping traders out in exchange for a little payment or cups or tea and pieces of fruit. Sometimes she would sing in a thunderous contralto voice that set the pigeons rising from the market roof. And she would bang her walking stick on dustbin lids, causing passers-by to leap out of their skin.

Although many people knew of Anna by sight and reputation, no-one appeared to know her story - how she came to Bradford, where she came from, and what had happened to her. She was thought to be from Eastern Europe, and there were rumours that she had been in a concentration camp and suffered horrors at the hands of the Nazis. 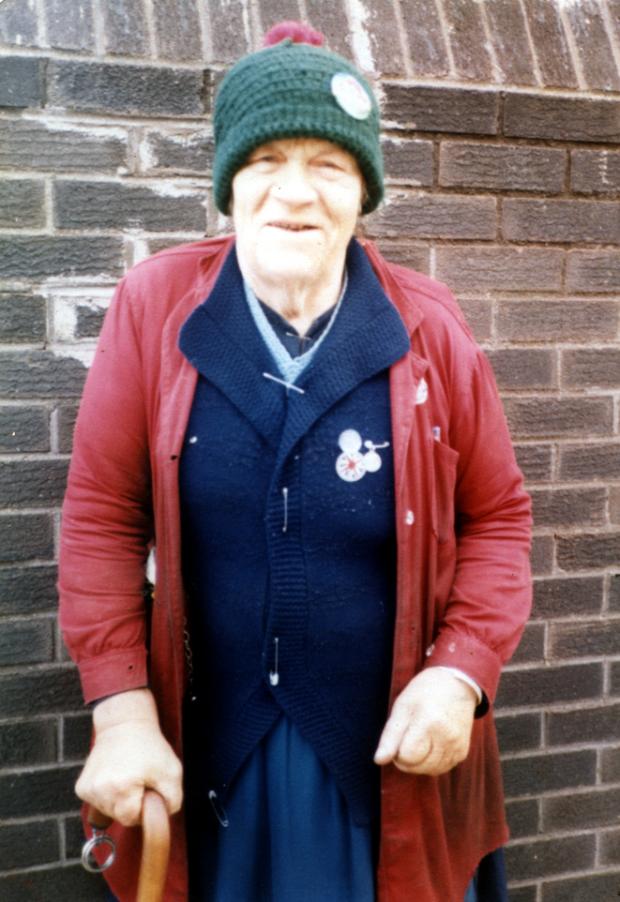 Anna, as many people will remember her

Anna outside a house, possibly her Bradford home

Back in 2007 the Telegraph & Argus was handed this remarkable set of photographs, found dumped near a skip beside Anna’s house in 1985. The images are of Anna in her earlier life; snapshots of the life of a woman whose background was a mystery. Going back to the Second World War and beyond, they include group photos of Anna as a young woman in her homeland, which appears to have been Poland or Russia.

After Anna died in December, 1984, aged 76, a man who lived near her home in Chain Street, Bradford, picked up an envelope that had been thrown out near a skip. It contained a collection of photographs from Anna’s life. Not knowing what to do with it he took it home, put it in a drawer and forgot about it. Over 20 years later, having a clear-out, he came across the envelope and brought the photographs in to the T&A. This led former longstanding feature writer Mike Priestley to ask readers what they knew about the woman in the photographs - “Polish Anna”.

The memories came flooding in. But it seemed that no-one could tell us her story - so it’s left to these photographs to offer some tantalising clues to the woman called Aneila Torba, her young life in Poland and a later life in Bradford. What happened in between remains a mystery and a matter for speculation.

Anna's identity card, possibly from transit camps during the war 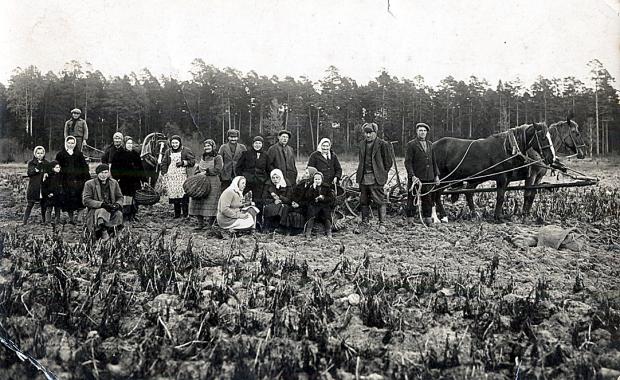 Is Anna in this picture of rural life in her homeland? 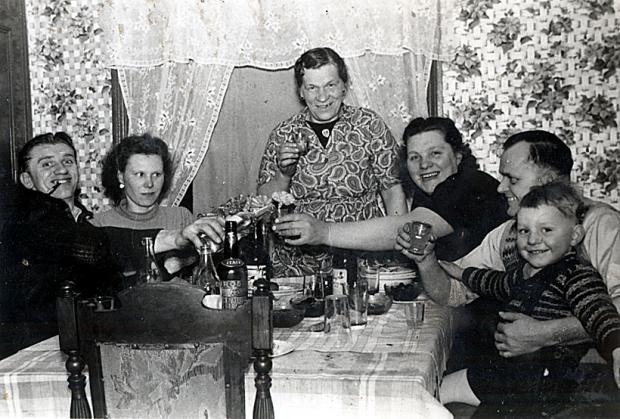 Anna, centre, with friends in Bradford

David Jones, headmaster at Holybrook Primary School, researched Anna’s life for his booklet Uncommon Lives, about 40 remarkable people. His belief is that she was a victim of Dachau concentration camp and it was rumoured she had been experimented on.

Speaking to the T&A in 2007, he didn’t discount one theory that when the war ended Anna found herself being ill-treated again, this time by the Russians: “At the end of the war, with the huge population movement that went with it, some people escaped from one tyranny straight into another, “ he said. As for that walking stick: “I once saw her ping someone on the ankle bone with it, some kid who was giving her grief. The way she hoarded money was almost like the way she was with badges. If she saw you with a badge on she would ask you to give her it. Her story is a testimony to that whole Holocaust period.”

Here are some memories from 2007, when we first published these photographs of Anna:

Annie Sergeant was a nursing sister at Morton Banks hospital, Riddlesden, from 1950 when Anna worked in the kitchens: “We knew her as Amelia. The matron was concerned about what she did with her wages, so the secretary went to the bank with her and helped her to open an account.”

Barbara Garnett was a cook at Morton Banks from 1950-52 and recalled Anna helping out: “When she was in a good mood she’d do anything. But if she was in another sort of mood she’d just sit for hours doing nothing. We had some lovely times together, but no-one was really sure if she was a woman or a man.”

Anna, second from left, in a work uniform

Second from right, with friends

From Ely, Cambridgshire, Jacqueline Roe wrote: “In 1962 I left school and went to work at Joseph Dawson’s Cashmere Works. Anna was one of the first workers I met and I have to admit to feeling a little afraid but I needn’t have. She looked after me and wouldn’t let anyone do anything to upset me. After I left the mill I would often see her around the market and she would always shout and wave.”

Florence Dunn remembered Anna in the 1950s walking up Thornton Road towards Woolcombers’ mill at Fairweather Green: “She wore an old hat, an Army great coat, and big boots. She would whistle away, fingers in her mouth. I remember her in the open-air market, hugging huge trays of dozens of mugs of tea.”

Gary Lorriman wrote: “Being born and bred in Manningham, going to the ‘pictures’ was the highlight. If the film had an ‘A’ category, under-16s had to be accompanied by an adult. I’d hang around the picture house, asking adults if they’d take me in, and the woman I knew as ‘Anna the Pole’ did so on many occasions. Once inside she’d tell you to ‘scaramoosh’.”

David Oldfield: “I used to go to Marlborough Cinema when I was about seven and Anna used to say ‘David, you are not old enough to be here.’ When I go to be nine she said: ‘David, you are old enough now.’ I think she knew my name because my mother worked at Craven Dairies in Ivegate and Anna used to go in there. In the market, if anyone wanted help she’d pick up sacks of potatoes and boxes of oranges. As for that stick, I once saw her rap someone’s knuckles with it.”

Another reader wrote: “Anna would sit on the bench outside John Street and shake her stick at you. My auntie told me Anna was a prisoner in the war and had been given an experimental sex change.”

Steve Spencer recalled: “At Green Lane School, Manningham I was waiting for the bus on Lumb Lane when Anna appeared in her woollen hat, heavy shopping bag in one hand, in the other a strange umbrella with a carved, brightly painted parrot’s head for a handle. She must have been haggling to get across Lumb Lane and the lollipop man was having none of it until it was safe. They began arguing and Anna swung the umbrella above her head, bringing the parrot’s beak down on the poor man’s head! She picked up her bag and crossed the road.”

* Do you have memories or photos of Anna? Email [email protected] 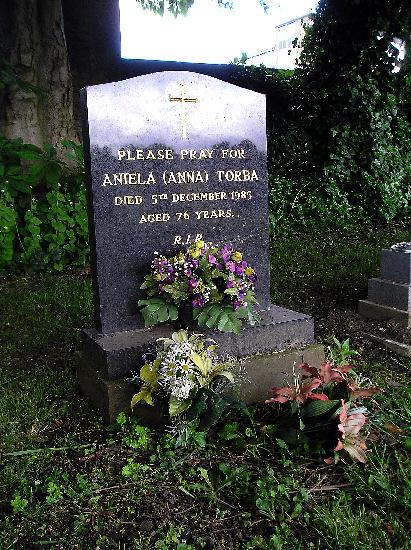 Alexander Kerzhakov has a coronavirus. He missed Tomi's match (Metaratings)
Busquets about 1:3 in the Clasico: Real Madrid's victory was determined by a penalty. Barca were punished excessively
Conte about 2:0 with Genoa: Inter are aware of their strength, and this helped us play with confidence
👏 The whole world is talking about Khabib's departure and congratulates him on his victory. They demand the first place in the rating for him and respect the desire to be with his family
Klopp Pro 2:1 with Sheffield: Wins 2:0 or 3:0 come when you fight fiercely in games like this
Messi repeated his worst streak - 6 games without goals to Real Madrid
Schalke are 21 consecutive games unbeaten in the Bundesliga and are in penultimate place
Source https://www.thetelegraphandargus.co.uk/news/18736913.remarkable-images-bradfords-old-anna/?ref=rss

Simon Cowell is putting on weight to help recovery from breaking his back, reveals Sinitta