Transition Farmers Rachel and Richard Risdon have three main goals: reducing their carbon footprint, generating an income from the environment and securing adequate labour for their family farm.

The couple run a grass-based herd of 300 cross-bred dairy cows at Bramford Speke, near Exeter, Devon.

The farm supplies milk to Arla, which recently mapped the carbon footprint of the raw milk it purchases from 1,964 UK farmers.

See also: Can all-forage dairy diets be practical and profitable?

Results show that each litre of Arla milk is produced with greenhouse gas (GHG) emissions equivalent to 1.13kg of carbon dioxide – about half the global average and less than the UK average of 1.25kg/litre.

The dairy processor has set a target of reducing its total farm-based emissions by 30% by 2030.

To achieve this, it has suggested targeting a number of measures, including cow digestion, emissions from feed and manure handling.

Some 79% of Arla’s farmland is used to grow grass. Mrs Risdon says: “Being very grass-based ourselves, we are not turning soil over regularly or doing things like that. But there is probably more we could be doing.”

Arla is participating in research to identify how to help farmers quantify and speed up carbon sequestration – taking carbon out of the atmosphere by trees, grass or hedgerows – which will naturally offset some emissions in future.

Grass at Brampford Speke is mainly ryegrass with as much clover as possible without causing problems with bloat.

The spring block-calving herd yields about 4,900 litres a cow and 452kg of milk solids from about 650kg of concentrate.

Cows are grazed rotationally on a New Zealand-style paddock system. They stay outside in the field for as long as ground conditions and grass growth allow, which is usually until late November.

Once fully housed, cows are self-fed silage – each consuming about 1t from the open clamp face – and a cake-based blend of wheat and sugar beet pulp. All cows are dried off before Christmas.

It is a simple low-cost system, says Mrs Risdon. “Our key focus has always been to improve fertility as much as possible because that means more days in milk. If we are drying them off on 18 December, it is no good them not calving until April.” 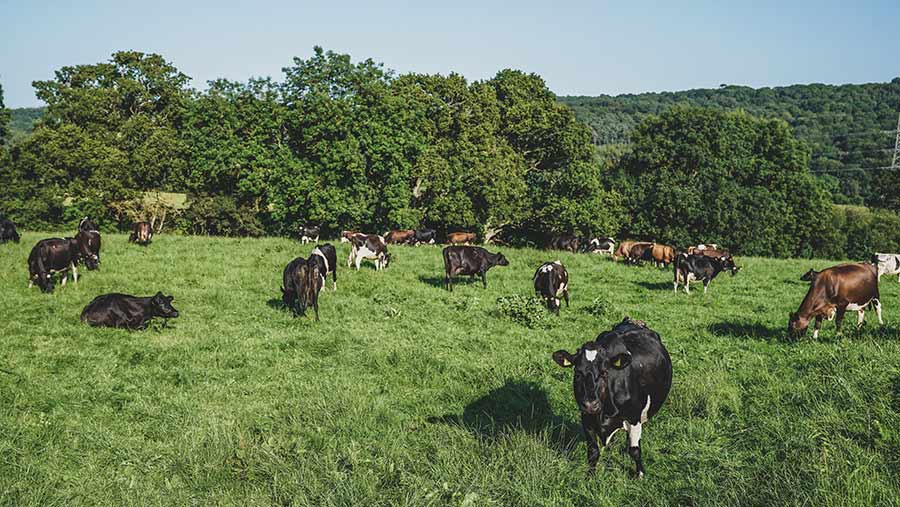 Cows go back out pretty much the day they calve in February, with about 3-5kg of concentrate and no silage.

Mr Risdon says: “We carry good-quality grass through from autumn to spring to get them out early, and then graze them through the summer.”

Reproductive performance is measured as the six-week in-calf rate – a key driver of profitability in spring block-calving herds.

“We spend a lot of time on our herd health plan – what we are going to do and how we are going to mitigate any issues we had last year. It is about making those important changes.”

A year wall planner in the dairy office ensures any proposed changes can be written up as soon as it becomes apparent they are needed – with vaccinations shifted forwards or backwards, for example, to ensure things happen at the optimum time.

Like many other dairy herds, the biggest challenges are around lameness and mastitis.

Pneumonia is not so much of an issue, with zero cases in youngstock for the past few years, with five-week-old calves going outdoors on milk.

In terms of further reducing their carbon footprint, the couple are keen to learn more about the government’s forthcoming Environmental Land Management (ELM) scheme, which will reward producers who deliver public goods on their farm.

These public goods include the delivery of better air and water quality, higher animal welfare standards and measures to reduce flooding.

Defra says this will help the UK reach net-zero emissions by 2050, while boosting farmers’ productivity.

A more immediate concern, however, is the availability of farm labour – or, rather, the lack of it.

As on so many farms at the moment, staff recruitment and retention is a major worry, says Mrs Risdon.

“One issue here for us is accommodation,” she explains. “We only have a one-bedroom flat available for staff.

“We have good job applicants – it is just managing expectations. We are also close to Exeter, which is extortionately expensive, so to find nearby employee accommodation which is affordable is really hard.”

Rachel and Richard Risdon are two of our Transition Farmers. Join them as they strive to become financially and environmentally sustainable and how they intend to overcome the challenges they face over the next five years.