The Europa League is back at Ibrox with group stage action between Rangers and Lech Poznan.

Steven Gerrard's men are in an unusual situation in Europe over recent years where they are arguably the favourites to win the game.

Normally they are underdogs and it will be fascinating to see how that change is handled by the Ibrox boss and his players.

Lech Poznan are the visitors to Glasgow and could have former Celtic defender Thomas Rogne in their squad.

The Polish outfit didn't get off to the best of starts last week with Benfica running out 4-2 winners, while Rangers earned a 2-0 win away in Belgium against Standard Liege.

Kemar Roofe scored a wondergoal that night and might fancy a chance from the start and it's likely to be a straight choice between him and Alfredo Morelos for that role.

Gerrard does have decisions to make in midfield and he'll even have new boy Bongani Zungu available, although it's unlikely he'll be fit enough to start after his 14 day quarantine.

Skipper James Tavernier has nine goals this season and as usual, will be vital to how Rangers get on at Ibrox.

Stay tuned for all the latest team news, action and reaction.

Culshaw: Poznan will be tough 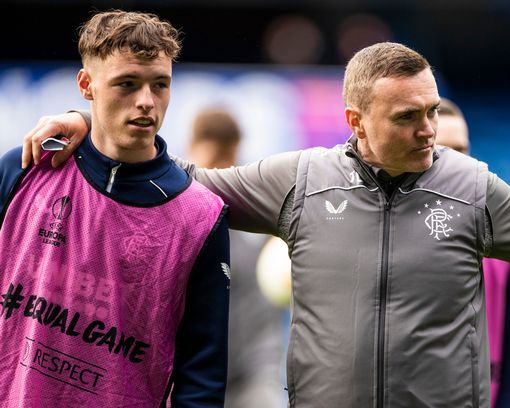 Tom Culshaw insists Lech Poznan will be a tough test for Rangers in their Europa League clash at Ibrox.

The Polish side travel to Glasgow and Rangers coach Culshaw insists his side won’t take them lightly, despite many viewing Rangers as comfortable favourites.

They’ll be a good team. When you get to this stage of the Europa League, every team you come up against is a good team.

We’ve had eyes on them since the draw was made, even in the last round when they played against Benfica it was a close game. It was 3-2 for most of the game and then they conceded another goal late on in injury time. They put a good performance in so we’ve got to be ready for them. In possession, they’ve got some good players we need to be aware of. Out of possession, they’re organised and well drilled.

There’s no doubt the current Rangers team is poles apart from the one Steven Gerrard inherited.

And tonight he’d love to prove it by taking a team of Poles apart.

Chances are, if they maintain the form they’ve shown so far at home and abroad, they’ll do just that.

Not that Gerrard is one for fanciful predictions. He’s far too long in the tooth to get ahead of himself.

Having watched Lech Poznan put up a good fight against Benfica in their Europa League opener, before shipping an injury-time goal to lose 4-2, he’s certainly taking nothing for granted.

Yet his team’s consistency – particularly in the European playground where they have lost only five of 36 games under his stewardship – should fill him with confidence their own opening-night win in Belgium can be matched at Ibrox.

Rangers got off to the best possible start in the Europa League this season last week with a win at Standard Liege.

The 2-0 win at the Stade Maurice Dufrasne featured a wonder goal from Keemar Roofe to grab all three points in Belgium as Steven Gerrard eyes a better campaign in Europe this season and the Scottish Premiership title.

A repeat of Roofe getting on the scoresheet is 19/20 anytime with thepools.com

They host Poland’s Lech Poznan who have definitely made a mark on the competition. They gave Benfica a run for their money coming back from behind twice before the Portuguese side came out 4-2 victors.

Poznan had Mikael Ishak to thank for his two goals at the Stadion Miejski Poznan and a repeat performance at Ibrox is 25/1.

Steven Davis has admitted he wasn’t sure what effect lockdown would have on his season but he’s delighted with how it’s going so far.

The 35-year-old had his first experience of a prolonged absence from the game he loves when football was shut down from March until August.

And he is open that he wasn’t sure of the impact the break would have on his ability to produce on the pitch.

But with the midfielder playing as well as ever in the Ibrox engine room, he looks back on the pause and subsequent pre-season with satisfaction of a job done well.

He’s also delighted to see the return of players like Ryan Jack and Joe Aribo from injury and highlighted that the resulting strength in depth only makes Rangers stronger for the challenges ahead.

And welcome to our live blog as Rangers host Lech Poznan in the Europa League.

It should be a cracking battle at Ibrox with Steven Gerrard’s men looking to make it two wins from two after beating Standard Liege last week.

Lech, on the other hand, are looking for their first point after a 4-2 defeat to Benfica last Thursday.

Stay tuned for all the team news and live updates.

Van Dijk - best Central defender of 2020, Trent-right, Robertson-left (ESPN)
Massimiliano Allegri: Ronaldo is a top player in terms of mentality. He has a new goal every year
Borussia Dortmund presented a collection with Spongebob as part of a deal with Nickelodeon
Woodward on Manchester United and trophies: there is a lot of work Ahead to achieve the stability needed
Neuer - best goaltender in 2020, Alisson-2nd, Oblak-3rd (ESPN)
Liverpool are Interested in 21-year-old Leipzig defender Konate
Niko Kovac: I'm Waiting for Golovin to return. But it might be better to wait another week or two
Source https://www.dailyrecord.co.uk/sport/football/football-match-reports/rangers-vs-lech-poznan-live-22926636