Inspired by Tottenham playing host to Anthony Joshua’s world title fight against Oleksandr Usyk on Saturday night, Nuno Espírito Santo had used boxing parlance to illustrate what he wanted to see from his team.

The Spurs manager said that they could not throw punches all the time and, when they took one, they had to cover up; to stop the bleeding. Their response to being dumped on to the canvas in the previous two Premier League games – the 3-0 defeats against Crystal Palace and Chelsea – had been nonexistent.

And yet Spurs continued in precisely the same vein. They barely threw a punch during a first-half that they will want to forget very quickly and, once behind to Emile Smith Rowe’s opener, they were taken apart by an Arsenal team in rampant mood.

It had felt as though the consequences of defeat might be more significant than the glory of victory – as strange as that sounds – and Nuno would find himself under an uncomfortable spotlight, not least because his first-half tactic of playing only Pierre-Emile Højbjerg in front of the back four backfired spectacularly.

Arsenal were excellent in the first-half, Pierre-Emerick Aubameyang and Bukayo Saka scoring their other goals before the clock had hit 35 minutes and the victory, which was their third in a row in the league, was wildly celebrated.

Mikel Arteta will point to it as evidence of his message getting through, of memories of Arsenal’s horrible start to the season continuing to recede, and he could depart with a spring in his step.

Spurs did rally in the second-half, with Son Heung-min reducing the arrears and Lucas Moura hitting the crossbar in stoppage-time. But there was never any prospect of them staging the comeback. “You’re getting sacked in the morning,” the Arsenal fans told Nuno in the 78th minute. It feels as though the heat is on.

Joshua’s defeat had led to jokes from the Arsenal support about him losing all of his titles the moment that he entered the Tottenham stadium. Is this fixture still worthy of heavyweight billing? It feels true to say that its significance does not resonate quite as far afield these days. Both clubs are bracketed as being a part of the Big Six. But a Big Four has emerged and north London’s warring tribes have come to feel a gap develop between it and them.

None of that seemed to matter for the 90 minutes here. It was all about a game that Arteta had labelled as the biggest of the season, about doing it for the supporters and it was Arsenal who brought the aggression at the outset, pressing hard and high. There was a sharpness about their movement and it was astonishing to see how much space they were able to find in between the lines.

Then again, Højbjerg could not be everywhere for Spurs. Nuno wants his team to be compact but is he going to get that when he plays Tanguy Ndombele and Dele Alli as the No 8s in his 4-3-3 system?

Arteta opted for greater balance, bringing Granit Xhaka back from suspension in place of Nicolas Pépé, and it could not have turned out any better for him during a golden first-half. Or any worse for Nuno. 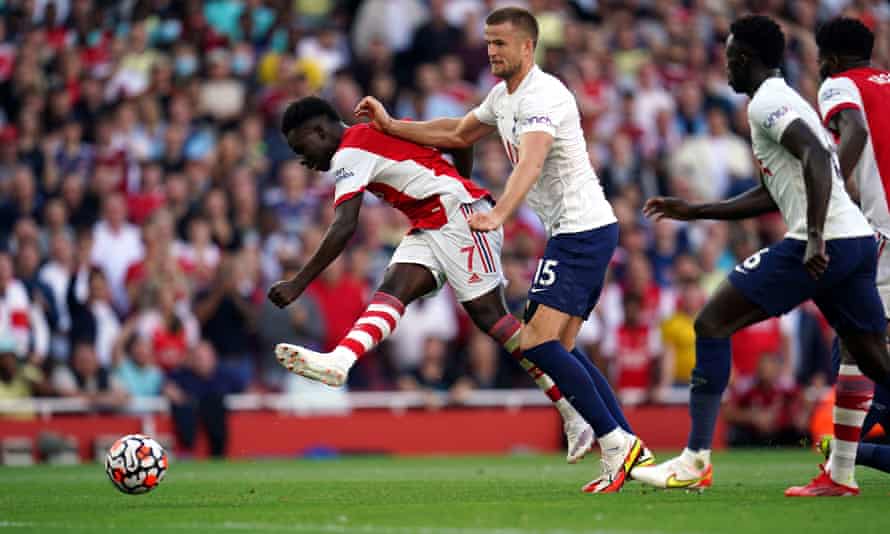 It was impossible to say anything good about Spurs before the interval. They were timid in the one-on-ones, they failed to track Arsenal’s runners and, worst of all for Nuno, they were wide open, failing to compress the space and to hold their shape.

Xhaka, who would be forced off after hurting his knee in the buildup to Son’s goal, was involved at the start of the moves for the first-half goals. And once Arsenal were up and running, through Saka, Martin Ødegaard and Smith Rowe – a potent line behind Aubameyang – it really was a sight for the sore eyes of the home support.

The second goal was a beauty, Arsenal moving from back to front once Xhaka had taken a slightly risky pass from the goalkeeper, Aaron Ramsdale, and turned away from Højbjerg. Smith Rowe was prominent thereafter and he supplied the final pass for Aubameyang, who shot low past Hugo Lloris.

The opener had come when Xhaka chipped forward for Ødegaard, who went right to Saka. With little pressure on him from Sergio Reguilón, Saka pulled back for Smith Rowe, who sauntered into space to sweep home from eight yards.

The third summed up Spurs’s misery, with Harry Kane falling over the ball as he tried to create the space for a shot and Arsenal breaking quickly, Xhaka finding Smith Rowe and Saka then running at Reguilón. Kane had chased back but, when he leapt into a tackle on Saka, the ball broke for the Arsenal winger, who rolled past Lloris.

Partey had extended Lloris on 17 minutes while Son worked Ramsdale from a tight angle at 1-0 and Kane missed a free header from a corner just before half-time.

Nuno’s half-time changes were designed to add belated stability – Emerson Royal for Japhet Tanganga and Oliver Skipp for Alli; the latter prompting a switch to 4-2-3-1. Skipp made a difference, ever available for the ball, and Spurs were able to salvage a little pride.

Kane was unlucky not to get a penalty after he was clipped by Ben White while he fluffed a finish after an excellent first touch to kill an Eric Dier ball over the top. Lloris saved well from Saka but Spurs got the goal that their second-half display deserved when another sustitute, Bryan Gil, found Reguilón and Son guided home the cross. Ramsdale did well to paw Moura’s deflected shot against the crossbar and, for Arsenal, the celebrations could begin.

Ex-owner of Newcastle Hall about the Saudis: How dare 6 top clubs criticize us when they were going to the Super League?
Jurgen Klopp: Salah's performance is insane. He is one of the best players in the world, without any ifs and buts
Pat Nevin: Pulisic had periods at Chelsea when it seemed that he would become one of the best players on the planet
Sulscher on Lingard: We want to extend the contract, he is an important player for Manchester United. I hope we will come to an agreement
Messi attends the PSG - Angero match. Less than a day has passed since the Argentina - Peru game
Hazard, most likely, will not play with Shakhtar in the Champions League. He trained individually
One-Bissaka will be able to play with Atalanta in the Champions League. Manchester United's appeal against his disqualification was granted