The Queen has returned to Windsor Castle for her official birthday celebrations, including a scaled-back Trooping the Colour ceremony.

After an evening spent cracking jokes with world leaders in Cornwall for the G7 summit, the monarch watched soldiers and musicians take part in a socially distanced march in the parade area of the castle.

It marked the start of the official celebrations for the Queen, who actually turned 95 earlier this year.

Members of the Massed Band of the Household Division took part in what’s been dubbed a mini Trooping the Colour, after the full version couldn’t be held for a second year in a row due to Covid.

Guardsmen showed off their precision marching skills while keeping two metres away from each other in glorious sunshine in Berkshire.

The soldiers chosen to take part have all been supporting communities and the NHS during the pandemic or served overseas on military operations.

Trooping the Colour, a centuries old annual tradition, is normally staged in central London and attracts large crowds but it had to be called off again this year.

Organisers of the official celebrations still wanted to stage a ‘memorable and uplifting day’ for the monarch. 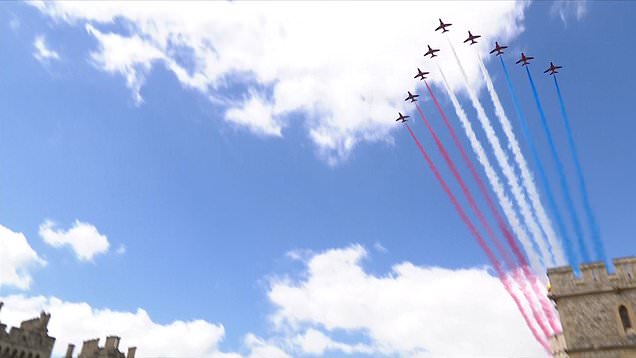 After a year which has seen the Queen mourn the loss of her husband the Duke of Edinburgh and face accusations about her family from Prince Harry and Meghan Markle, the ceremony was intended to be a positive event.

Lieutenant Colonel Guy Stone, Brigade Major Household Division, who was also in overall charge of the military arrangements for Philip’s funeral, said: ‘It is the highlight of the year and a poignant way for the Household Division to thank Her Majesty for all that she does for the nation, particularly through this challenging time.’

A small handful of seated guests were allowed in to watch the ceremony – a change from last year when only the military were present.

The Queen was joined by her cousin the Duke of Kent on the dais as they watched the parade go by.

The servicemen and women on parade numbered almost 275, with 70 horses, compared with the 85 soldiers who were in the ceremony last summer.

Among those taking part were a father and son – Colonel Jeremy Bagshaw, Chief of Staff at Army Headquarters London District who appeared with son 2nd Lieutenant Henry Bagshaw, 18, of the Coldstream Guards.

The Queen is set to welcome the US president Joe Biden and his wife Jill to Windsor tomorrow for tea.

He is the 14th president of the Queen’s long reign and she’s now met them all apart from Lyndon Johnson.

READ MORE: What is Trooping The Colour and will there be any celebrations this year?

Lancashire motorists named after being banned for drink driving

Preston art festival to finally go ahead after Covid delays