THE QUEEN has bid farewell to Prince Philip with a touching photo of the Duke.

Her Majesty, 94, laid the Duke of Edinburgh, who stood by her side for seven decades of unwavering service, to rest in an emotional service.

The Royal Family's official Twitter page this evening shared the touching tribute with the caption: "In loving memory of His Royal Highness."

Due to Covid restrictions the Queen was forced to sit alone inside Windsor Castle's St George's Chapel as she lead the Royal Family in mourning at the funeral of her beloved husband, the Duke of Edinburgh.

Dressed in a face mask and in sombre black, it was the first time the monarch, grieving for her devoted companion of 73 years, has been officially seen in public since Philip died eight days ago.

And the Duke's coffin was lowered into the Royal Vault at St George's Chapel - and was broadcast live for the first time in history.

Accompanied by her loyal lady-in-waiting Lady Susan Hussey, the Queen made her way from the Sovereign's Entrance in the State Bentley, as the national anthem was played, to join the solemn funeral procession.

Philip's coffin, draped in his striking 12ft personal standard and decorated with a wreath of flowers specially chosen by the monarch, and his Admiral of the Fleet Naval Cap and sword, was carried into St George's Chapel.

It had been lifted into place by Grenadier Guardsmen onto the rear of the dark bronze green Land Rover Defender hearse the duke designed himself.

The Duke's association with the Royal Navy and love of the sea was a focus of the service - but in line with his wishes there was no sermon.

More than 730 members of the armed forces took part in the event, but there is a limit of 30 mourners at St George's Chapel, under Covid rules.

The Duke of Edinburgh's death means the Queen - who turns 95 next week - will now rule alone for the first time in her 69-year reign.

During the service, Prince Charles fought back tears as the Dean of Windsor paid tribute to Philip's lifetime of dedication and service to his country.

Prince William sat next to his wife, the Duchess of Cambridge, while Harry sat opposite on the other side of the chapel.

As the 50-minute service came to a close, Philip's coffin was lowered into the Royal Vault - in unprecedented scenes never aired on television before.

But the Royal Vault is not his final resting place as he will eventually be buried alongside the Queen at Frogmore Gardens when she passes away.

The lowering of the coffin using an electric motor in front of millions of TV viewers was one of many factors that made his funeral unlike any other royal occasion.

The emotion of the day was evident throughout the service - magnified by the drastically-shortened guestlist of just 30 mourners.

Despite the royals having to wear face masks in the chapels, tears were clearly visible at moments.

At one point, Prince Charles welled up as he led the procession behind his father's coffin.

Kate Middleton shielded her eyes behind a classic black veil as she supported her husband Prince William.

She chose to wear a pearl choker belonging to the Queen and worn by Princess Diana in a touching nod to her late mother-in-law. 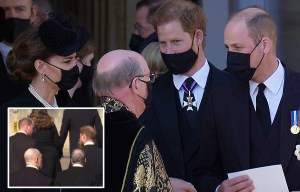 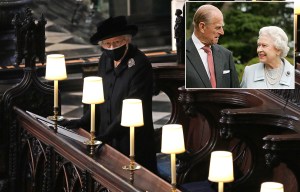 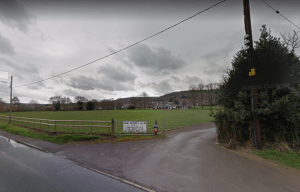 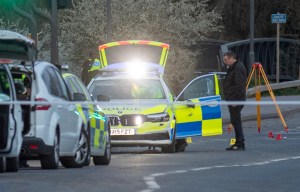 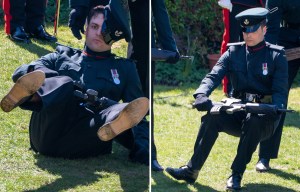 Sophie Wessex was also clearly emotional as she paused to wipe tears away flanked by her two children and husband Prince Edward.

The royal - considered a favourite by the Queen - has been supporting the family through their grief this week.

While Harry and William regularly bowed their heads as Philip's lengthy honours were reflected in the scaled-back service.