Palace sources branded "unhelpful" the timing of the Duke of Sussex's first TV appearance after Megxit. According to insiders, the release of Prince Harry's interview with his friend and TV host Mr Corden has created "disquiet" at Buckingham Palace.

One source made it clear there is a tacit agreement within the Royal Family when it comes to leaving the spotlight to the Queen.

They told the Daily Mail: "When the Queen speaks as she has done about the vaccine it is accepted that she has a clear field".

Another openly criticised the "lack of coordination" which has led Harry's interview to overlap with the monarch's plea to Britons over getting a vaccination against COVID-19.

They said: "This blurring of the lines doesn't help anyone. 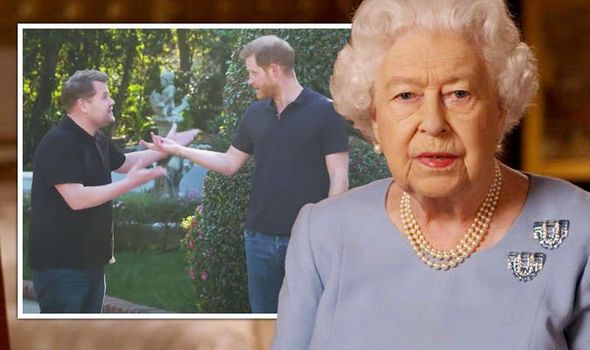 Palace sources have hit back at the timing of Prince Harry's interview with James Corden (Image: GETTY)

"When the Queen speaks like this it is her message that should be heard without other distractions.

"This lack of coordination is unhelpful."