The Queen, 95, has received her official birthday gift from the nation's armed forces - a ceremony of pomp and pageantry in her honour. Windsor Castle was the setting for the spectacle dubbed a mini Trooping the Colour, featuring soldiers who have supported communities and the NHS during the pandemic or served overseas on military operations. From her dais, the Queen watched the ceremony unfold with Guardsmen in their scarlet tunics and bearskins and the Household Cavalry Mounted Regiment in their breast plates and plumed helmets.

The Queen stopped to speak to the Major General commanding the Household Division, General Chris Ghika.

During the conversation, the monarch takes a quick peek of her watch and moves swiftly on.

The birthday parade is a gift from the Household Division - the Army's most prestigious regiments - which has a close affinity with the monarch and is keen to show its loyalty to the Crown.

The traditional Trooping the Colour ceremony, which is normally staged in London and features hundreds of servicemen and women and thousands of spectators, was ruled out for the second successive year because of the threat of coronavirus. 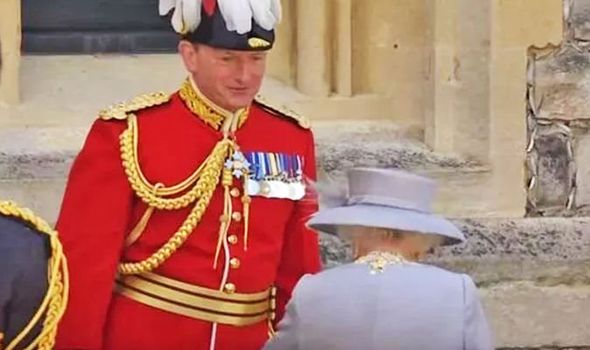 The Queen was caught checking her watch during Trooping the Colour (Image: SKY)

Lieutenant Colonel Guy Stone, who planned the Queen's official birthday celebrations in Windsor Castle's quadrangle, said he wanted to create a "memorable and uplifting day" for the monarch.