Windsor is said to be the Queen's favourite royal residence and she has been photographed over the weekend riding one of her ponies, a 14-year-old Fell Pony called Balmoral Fern. The 94-year-old regularly rides in the grounds of Windsor and has been a passionate horse lover and breeder of thoroughbred racehorses throughout her reign. The Royal Family posted on Twitter: "The Queen is pictured riding Fern - a 14 year old Fell Pony - in Windsor Home Park this weekend."

The Queen wore a colourful headscarf and was smartly dressed in a tweed jacket, jodhpurs, white gloves and boots.

The last public picture of the Queen was taken as she was driven away from Buckingham Palace to her Windsor Castle home on March 19.

One of the Queen's dorgis, of which she has two named Candy and Vulcan, could be seen next to her as they both looked out of the car window in the last photo of her.

The Queen carried out official duties the day before her planned departure, but held her weekly audience with Prime Minister Boris Johnson on the phone rather than face to face as usual. 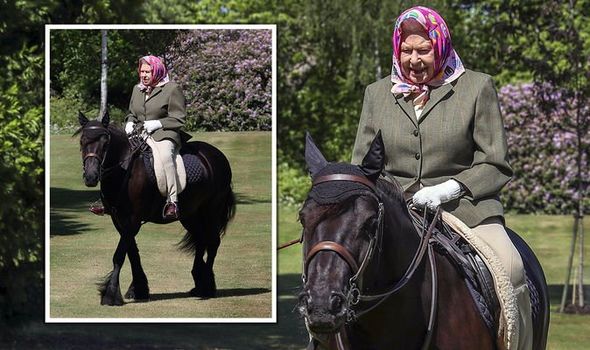 The Queen has been pictured for the first time since lockdown began (Image: THE ROYAL FAMILY)

The Queen has made two televised addresses to the nation during the lockdown.

The first was a speech to reassure the country that coronavirus would be overcome and those in isolation "will meet again".

Another was on a similar theme to mark VE Day.

During lockdown, she has been joined by Prince Philip at Windsor Castle and it is likely a small group of household staff have been isolating with her.

Milan will offer 25 million euros for Celtic defender Ayer
Klopp on plans: Four years at Liverpool. After that, I want to do nothing for a year
Rogers Pro 1:4 with Bournemouth: Leicester play well only 45 minutes after the break
Inter and Roma are Interested in Garay
Liverpool want to sell Lovren, not let Him go as a free agent. Zenit are Interested in the player
PSG defeated Le Havre (9:0) in a friendly match. The game with Atalanta in the Champions League is in a month
Hazard was included in real's bid for the match with Granada, Hames-no
Source https://www.express.co.uk/news/royal/1289596/queen-elizabeth-II-news-royal-lockdown-horse-picture-Windsor-Castle?utm_source=feedburner&utm_medium=feed&utm_campaign=Feed%3A+daily-express-news-showbiz+%28Express+%3A%3A+News+%2F+Showbiz+Feed%29