Cricket is a strange game. While ostensibly a team endeavour, it has elements of individual sports. The performance of a cricketer is far more easily quantifiable than that of rugby players or footballers, who play in more fluid games. Bowlers and batsmen have their distinct roles and take it in turns to contribute to their team’s success. For the last decade, PSG have been designed in much the same way. It may finally be working.

PSG’s transfer policy during the QSI era has focused on celebrity forwards rather than building a team to win games as a cohesive unit. As one player complained during the Thomas Tuchel reign, the plan from the boardroom as well as the dressing room has at times seemed to be: “Give it to Neymar.”

Relying on one player to produce a moment of inspiration to win a game should make a team easy for opponents to figure out and defend against. However, if that player possesses Neymar’s quality, success remains achievable. As much of the Pep Guardiola vintage has moved on or grown older, Barcelona’s strategy in recent years has been barely more nuanced than to do the same and “give it to Messi”. Although this one-dimensional approach has proven fruitless in Europe, often humiliatingly so, they have remained successful in Spain. PSG are much the same.

Relying on moments rather than collectivism may give PSG their best chance of European success this season. With the club enduring a transitional year between the Tuchel and Mauricio Pochettino eras, while dealing with the obvious financial restraints of the last 12 months, PSG’s individual quality is their greatest, and perhaps only, strength. For now, Neymar, Kylian Mbappé, Marquinhos and Keylor Navas are playing the part of Parisian strike bowlers and top-order batsmen. Each is taking his turn to produce what is needed.

PSG are not the best “team” in the Champions League, but they may have the greatest collection of individuals. For once that may be sufficient to carry them to their promised land, with their traditional rivals Real Madrid, Liverpool, Juventus and Barcelona all struggling this season.

Idrissa Gueye’s dynamism and Danilo Pereira’s staunch defending played their part but PSG were able to win 3-2 at Bayern Munich last Wednesday thanks to such moments of individual skill. Having been ineffective when his team have needed him most in the past, Neymar delivered perhaps his best performance in a knockout tie for PSG. His direct dribble and neat ball for Mbappé created the opener before his visionary pass found Marquinhos for the second.

Marquinhos has a strong case to be Europe’s leading defender this season, yet he finished past Neuer like a seasoned striker. Once PSG’s captain and emotional leader was taken off due to injury, momentum shifted towards Bayern. However, Navas was waiting, pads on and chin strap fastened, to take his turn. A string of important stops drew a rare nine out of 10 rating from L’Équipe the next morning.

Mbappé then rounded off the evening with a stunning reverse sweep of a finish at Neuer’s near post. PSG were unable to consistently impose themselves as a team in a thrillingly open game during which Bayern only grew in strength, but Mbappé, Neymar, Navas and Marquinhos – perhaps the form players in their positions in Europe this season – were on hand to let their individual quality take over and carry PSG to success.

In his best performance since the 2018 World Cup, Mbappé’s hat-trick at Camp Nou decided the previous tie but PSG’s form in a ferociously competitive Ligue 1 underlines how risky their individualistic approach can be. While the intensity of the team under Tuchel overwhelmed domestic opponents, and Unai Emery and Laurent Blanc’s incarnations suffocated teams with possession, Pochettino’s side have proven brittle and often alarmingly porous in midfield when one of their stars has not been able to produce the required moment of inspiration.

Promoted Lorient were able to crowd out PSG attacks at the end of January and counter swiftly to run out 3-2 victors. Some wayward Mbappé finishing allowed a weak Nantes side to emerge with three points from the Parc des Princes last month. Lille were able to hold PSG at arm’s length for long spells last weekend to pick up three crucial points in the title race. Although the diminished home advantage is also having an impact – Ligue 1 home wins have dropped to 37% across the first 300 largely crowdless games this season from 48% last season – the fact that PSG have lost their last three home league games remains an astonishing sequence.

While clearly unsustainable longer term, recent wins over Bayern and Barcelona show PSG have the quality to beat their peers in one-off meetings during this strangest of seasons. With the Champions League lacking a truly standout team, or teams, as in previous years, there may not be an opponent who can blow away an uneven and flakey PSG. This season may be their last chance to lift the Champions League title if their methods remain the same. However, as Pochettino looks forward to the second leg against Bayern on Tuesday, he should keep in mind – as Lorient and Nantes showed – Neymar and Mbappé cannot be Ben Stokes at Headingley every week. 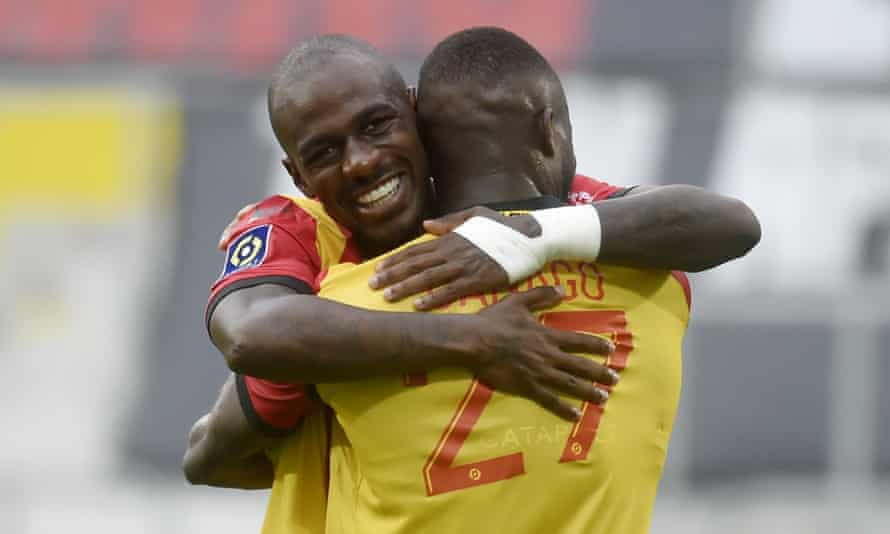 Few clubs across Europe can be as pleased with their season’s work as Lens. After just one defeat in their last 14 league games, Franck Haise’s promoted side comfortably saw off Lorient 4-1 this weekend despite a series of Covid-19 cases robbing Haise of some key players. They are now fifth and three points clear of sixth-place Marseille. Haise lines his team up in a dynamic 3-4-1-2, with various players worthy of praise for their performances this season: goalkeeper Jean-Louis Leca (35) and midfield bulldog Yannick Cahuzac (36), who offer Ligue 1 experience; under-the-radar signings such as Jonathan Clauss, who returned to France from Arminia Bielefeld last summer to become Ligue 1’s standout right-back; young breakout stars such as centre-back Loïc Badé, who may already be catching the eye of some of French football’s biggest clubs; and repurposed talents such as Gaël Kakuta, who is cast as orchestrator-in-chief. The understated Haise is a strong candidate for manager of the season given the consistency he has eked out of what is largely a Ligue 2 squad. Many of his players could be poached this summer and any club with a managerial vacancy should be seriously considering the 49-year-old.

After the last 16 of the Coupe de France came to a dramatic conclusion on Thursday, the quarter-final draw was made this weekend. Monaco, who edged past Metz after a penalty shootout, drew fellow Ligue 1 title chasers Lyon, who themselves needed penalties to see off a troublesome Red Star Paris from the third tier. PSG, who knocked out Ligue 1 leaders Lille last month, were paired with Angers. Stephane Moulin’s functional but ferociously effective side could prove tricky for PSG, who may have an eye on the Champions League. The other half of the draw sees bigger names face amateur opposition. Montpellier travel to Canet Roussillon of the sprawling fourth division, while Ligue 2 Toulouse take on another fourth-tier team in Rumilly Vallières.