DON’T get on the wrong side of the Home Secretary, Priti Patel. She’ll rip you a new behind. Five foot nowt.

The daughter of Asian shopkeepers, who came here from Uganda when they were kicked out by the dictator Idi Amin.

Yet she made it to one of the highest offices of state. By being clever, fearless and with the tenacity of a wolverine on ketamine.

Rarely does a week go by without Priti, being involved in a fight. Usually with the privileged elite of this country. First it was the white, public school-educated civil servants in her department.

Some accused her of “bullying”. Bullying indeed — listen, Sir Humphrey, how about you grow a pair?

They tried to get her sacked but she’s still there. I’m sorry, but I don’t think incredibly privileged, middle-aged white blokes can be bullied by a tiny daughter of immigrants.

For her part, Priti Patel said the civil servants were obstructive and not much use. No kidding, Secretary. Her latest battle is with another privileged elite — liberal lawyers. Very well-educated chaps and chapesses from absolutely LOVELY back-grounds, most of ’em.

As Home Secretary, Patel is determined to evict from our country proven criminals who were born somewhere else. Not people who may have a parking fine or two. Or hugged their granny while they were meant to be in lockdown.

Instead — as she put it — murderers and rapists. That kind of person. My guess — and sure, it’s only a guess — is that the British people are utterly behind her in that ambition.

This week 50 hardened nasty buggers from Jamaica, but resident here, were due to be deported.

Between them those 50 had served a total of 294 years in British prisons. At a huge cost to the taxpayer. And an even huger emotional and physical cost to their victims.

But as soon as the flight was announced the lawyers and the Labour politicians were on the case. Citing at every possible occasion “human rights”, they got that number of 50 whittled down to 20.

In some cases claiming that some individuals had high blood pressure and would find a flight injurious. An utter absurdity.

Patel gave an indication of the kind of people she was determined to evict from the UK: “Take for example, Mr A. He was convicted of rape, served his time in prison and was put on the sex offenders register,” she said.

“During his trial, his victim issued a heartbreaking statement to the court where she talked of the pain and suffering this caused her. Tomorrow morning, we aim to deport her attacker.

“Or take Mr B, who violently murdered a father of one and was sentenced to life in prison. Tomorrow morning, we aim to deport this murderer.”

But she has been stymied. More than half of those criminals now have leave to stay in the UK, where I’m sure they will be an incredibly useful asset to this country.

This happens too much. The human rights of vile people taking precedence over the safety and security of our own citizens.

It has happened before with Islamist terrorists. They come first and your rights don’t matter.

Still, at least we have Priti Patel to fight our corner. For a bit. Until the establishment tire of her vigour.

LONDON is one of the worst major cities in the world in which to live, says a new survey.

The Expat Insider report said people living in the capital didn’t feel safe, had a low quality of life and a very high cost of living. Not a huge surprise, is it?

Personally speaking, I’d rather live inside a badger’s jockstrap. And thousands are now trying to get out of our capital. Looking for places in the country where there’s a much higher standard of living and a rather more peaceful existence.

But it’s remarkable how quickly London has fallen down the list of places you might wish to live.

It was once the most exciting place on earth.

AT least we are now allowed to hug our grannies, according to the Government.

Mine will probably rattle a bit as she kicked the bucket in January 1972. But I’ll give it a go.

Did you ever think you’d live in a country where the Government could tell you which members of your family you could embrace?

THE fairly awful singer Rita Ora held a “secret” 30th birthday bash, with 30 of her friends, on Saturday.

All strictly against the lockdown rules. Someone dobbed her in and she has now issued a grovelling apology.

It was a “serious and inexcusable error of judgment” she sniffled. Oh spare us, please. You wouldn’t be remotely sorry if you hadn’t been found out, Rita.

Somewhere near you right now a sleb is breaking lockdown rules. A Premier League footballer with a string of prostitutes.

AT last the Tavistock Clinic is to stop giving children horrible drugs in order to help them change sex.

This is the result of a court case brought by a very brave young lady, Keira Bell.

She was given hormone blocking drugs at the Tavistock when she was 16 in a bid to transition from female to male. A few years later, Keira decided to “detransition”.

She claims doctors failed to give her a proper psychiatric assessment and the clinic treated her like a “guinea pig”.

The High Court agreed and suggested that very, very few teenagers would be able to give “informed consent” to taking these drugs.

There needs to be a public inquiry and a new law – no medical treatment for people who wish to transition until they are 18 years old.

And a bit less propaganda in our state schools about how marvellous it is to change sex.

Otherwise a lot of lives will be ruined – and there will be more court cases.

THERE’S a new quiz show on BBC Radio Four called BAMESHOW.
The celebrity – and I use the term loosely – participants must always be from an ethnic minority.

Most of the show is devoted to taking the mick out of white folk.
Still approve of your licence fee?

BEST news of this dismal year is that fans are allowed back into some football grounds on Saturday.

I’ll be at The Den to watch Millwall pour more misery on to Wayne Rooney’s Derby County.

Trouble is, with only 2,000 fans allowed in, it will make it much easier for the Old Bill or the stewards to evict me for shouting unpleasant things at Mr Potato Head.

Ah well. Football without fans had an awful pointlessness to it. The games often seemed like practice matches, devoid of passion and commitment.

Saturday is one small step back in the direction of normality.

Favourite quote of the week

HERE’S my favourite quote of the week.

Conservative MP Edward Leigh was ticked off for being not sufficiently socially distanced when he was in a House of Commons dining room with his wife.

Leigh said: “It seems in Covid-19 Britain you can sleep with a woman for 37 years – but you can’t have lunch with her.”

IF a scotch egg can be considered a “substantial meal” by our Covid enforcers, then anything can. A steak bake. A Lion bar. Half a Polo mint. 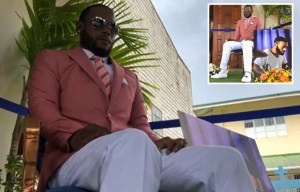 Nothing reveals the lunacy of these new restrictions quite as well as the Great Scotch Egg Debate.

Wales, I notice, is now back in full lockdown. So its “circuit breaker”, about which the Welsh first minister Mark Drakeford was very smug, can’t have worked that well, can it?

There is growing opposition to these restrictions, as Boris Johnson found out in the House of Commons on Tuesday. By Christmas time the rebels might be in a majority.

Klopp on 0:1 with Burnley: A real punch in the face. Losing this match was not easy, but Liverpool could
Atletico leads Real Madrid by 7 points in La Liga and has a game to spare
Liverpool do not win 5 matches in the Premier League in a row. Klopp's team repeated the worst streak in 4 years
Liverpool's 68-game unbeaten run at home in the Premier League has ended
Liverpool do not score 4 consecutive Premier League matches
Milik moves to Marseille. He was photographed with a shirt with the 19th number
Suarez scored 10+ goals in the league for the tenth time in a row
Source https://www.thesun.co.uk/news/13366763/priti-patel-rid-criminals-brits-behind-her/