Guardian writers’ predicted position: 9th (NB: this is not necessarily Louise Taylor’s prediction but the average of our writers’ tips)

Marcelo Bielsa is the Premier League’s oldest manager but the 66-year-old’s prodigious work rate shows no sign of diminishing. With quarantine regulations ruling out a trip home to Argentina, Bielsa has barely taken a day off as he aims to prove last season’s ninth place was no fluke.

Leeds ended last term strongly, concluding the club’s best top-tier campaign since David O’Leary led them to fifth in 2002 with four straight wins. Along the way to the finishing line, they collected 23 points from a potential 30, conceding eight goals in their final 11 fixtures.

With the readmittance of some of the country’s most partisan fans to Elland Road set to boost players’ adrenaline levels, a push for European qualification does not seem entirely unrealistic.

Bielsa has, characteristically, worked hard to ensure his squad’s fitness reaches optimal levels and, once again, Leeds are likely to prove exhausting opponents, capable of outrunning all-comers while retaining a penchant for winning in style.

Tactically brave and exhilarating to watch they may not retain last season’s element of surprise but have reason to believe they should prove immune to second-season syndrome that often afflicts teams after promotion.

Bielsa has long been unafraid to place his trust in youth. At Leeds, he has turned Illan Meslier into a poster boy for young goalkeepers and, with Kiko Casilla loaned to La Liga’s Elche the 21-year-old Frenchman will have Kristoffer Klaesson, a recently acquired 20-year-old Norwegian, as his understudy. 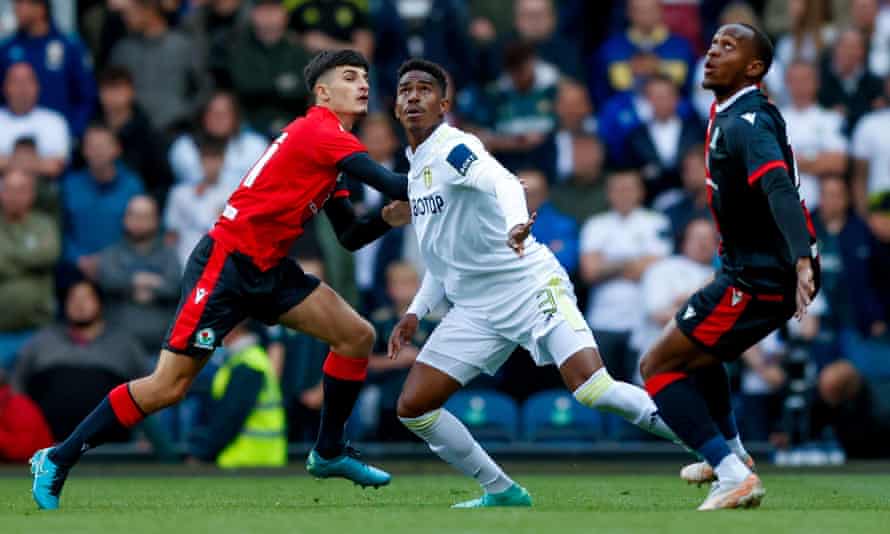 The £13m spent on Barcelona’s 24-year-old left-back Junior Firpo should ensure Ezgjan Alioski’s departure for Saudi Arabia’s Al-Ahli has not left a gaping hole. Alioski could operate in a few positions and although Firpo is slightly less versatile, the former Spain Under-21 international can also play at centre-half and right-back.

Considering that Raphinha’s fancy footwork down the right flank is once again likely to bamboozle opponents and the gifted left-winger Jack Harrison has turned his loan from Manchester City into a permanent transfer, the immediate horizon looks bright.

The experience of Sheffield United – promoted to the Premier League in 2018-19, ninth in 2019-20 and relegated in 20th place last season – serves as a cautionary tale but the alchemist’s touch exhibited in recruitment by the director of football, Victor Orta, dictates few fans fear a relegation skirmish.

And yet … no matter that he appears happy in Yorkshire, Bielsa is out of contract and still to sign the new deal. At other clubs, in different contexts, this would represent a crisis but, unlike most peers, the Argentinian prefers one-year contracts and rarely rushes to extend them.

Last year, he waited until 24 hours before the Premier League season kicked off before putting pen to paper and history could be repeated.

Has Bielsa taken a single day off this close-season? This question is the subject of considerable behind-the-scenes debate at the Thorp Arch training ground where the workaholic 66-year-old – the Premier League’s oldest head coach – has been supervising the laying of a new playing surface to match the pitch freshly installed at Elland Road. Unable to visit family in Argentina because of Covid travel restrictions, Bielsa spent supposed holiday time working with medics and sports scientists devising an enhanced injury prevention strategy. Even so he has not yet got round to signing a new deal and remains the top tier’s only out-of-contract manager. Not that Leeds fans should be alarmed; he invariably commits for one year at a time, signed last season’s agreement the day before the first game and has reportedly been spotted house hunting near Wetherby.

It takes a very special player to eclipse Kalvin Phillips as the most important cog in the Leeds machine but, albeit narrowly, Patrick Bamford achieves that feat. In scoring 17 goals – and creating seven more – in 38 Premier League games last season, Leeds’s principal striker ensured a top-half finish. Bamford, a blend of wonderfully intelligent movement and much-improved penalty-area incision, remains so vital to Leeds that Bielsa has built his team around him. 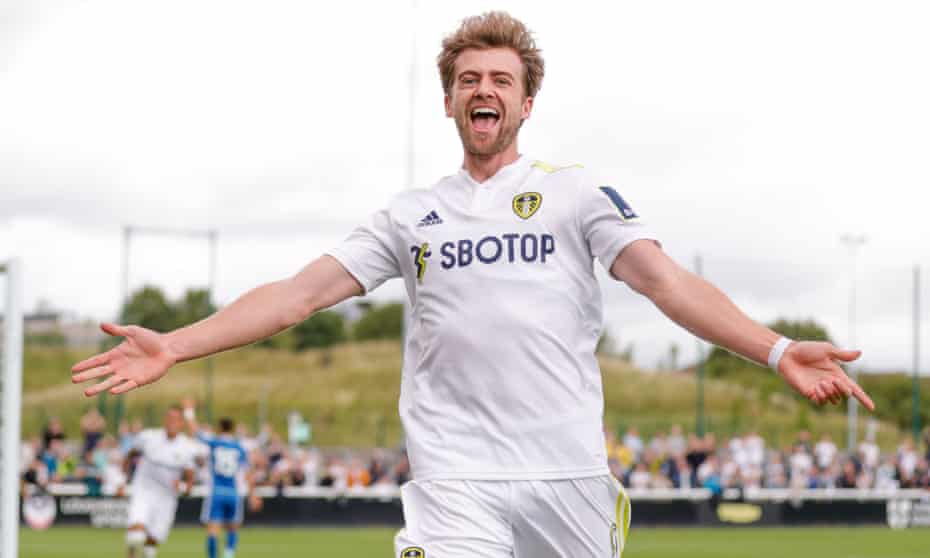 Andrea Radrizzani, the Italian majority owner who specialises in broadcast media), has endeared himself to fans with not only the recruitment of Bielsa but his expanding partnerships with the parent company of the San Franciso 49ers, which holds a 37% club stake and whose boardroom representative, Paraag Marathe, is the Leeds vice-chairman. Plans to expand Elland Road’s capacity to 55,000 while re-entering the Premier League’s top six and making Leeds “globally relevant” have ticked assorted boxes in the minds of supporters.

If Leeds fans were not surprised by Phillips’s impressive displays during England’s run to the Euro 2020 final, the midfielder won a whole new raft of admirers. Phillips is vital in joining the dots for Leeds, seamlessly linking midfield to defence and attack as they switch play in a split second. Also able to operate as an emergency central defender, Phillips’s reputation has been enhanced by England involvement but Leeds fans will hope he does not tire as this season unfolds.

Marching on Together and Bielsa: he comes from Argentina.

“Marching on Together. We’re gonna see you win. We are so proud. We’ll shout it out loud. We love you Leeds! Leeds! Leeds!”

“Bielsa he comes from Argentina. He came to manage super Leeds. They call him El Loco cos he’s crazy. He knows exactly what we need.”

Back to Elland Road

The good Situated right by the M621, well placed for the motorway network and surrounded by large car parks, the stadium is easily accessible by road. Buses from the city centre take about 20 minutes on match days.

The bad Although hugely atmospheric, the ground is badly in need of (impending) redevelopment. Leg room in the stands is tight and some views are obstructed by pillars.

An amalgam of club colours – white, blue and yellow – protecting the all-important white rose of Yorkshire arranged in a shield design.

“If Damsgaard signs for Leeds United I will get a tattoo of Victor Orta.”“

“If you give Leeds the ball they will make you dance.”

Lucas the Kop Cat is a bright-eyed, bushy-tailed snow leopard who shares a name with the former Leeds captain Lucas Radebe.

Joao Felix received two cards in a minute. For a signal and a gesture to the referee-he put his finger to his temple
Dvorkovich about Lokomotiv: We can't say that he shines, but he is able to get out of the Europa League group
Lewandowski scored in the 13th Bundesliga home game in a row. This is a record
Inaki Williams has the 200th match for Athletic in a row
Tarjei Bo about Norwegian football players: They have become a model for everyone who wants to use sports as a platform for statements. We must be the same as them
Tyuram about the best players: Lukaku is incredible. Mbappe and Marquinhos
We finally found out Messi's salary: he will earn 110 million in 3 years (if he does not leave earlier), he will receive 1 million in the crypt

Who is Karen Hauer dating and who is her Strictly 2021 partner?

Arsenal verdict: Odegaard proved he can mix up technical class with grit and determination, he’s more than up for battle

Lionel Messi misses out on dream home — after owner increased rent by £8,500 a month

Strictly Come Dancing quiz: Can you name these celebrity dancers?

'Prince Harry hates being photographed, but agreed to pose for a magazine cover shoot'

Empty supermarket shelves will ‘only get worse’ amid lorry driver shortage

Strictly Come Dancing: Past contestants with links to Merseyside

Covid deaths back to March levels as 8,000 people battle disease in hospital

Who is Joe Sugg and when did he start dating Dianne Busswell?

The current Liverpool roadworks all drivers need to know about

St Mirren leave it late to grab a point at Hibs

Maya Jama's incredible clapback after troll criticises her for smoking

Northampton off to winning start against depleted Gloucester

Brewers lack fluency in defeat away to Crewe

Holiday retreat bans guests who have had a covid vaccination

Driver taken to hospital after crash with 'stolen' Ford Fiesta

Liverpool 3-0 Crystal Palace: 5 talking points as the Reds go top of the league

Grandad of boy, 6, orphaned in cable car crash denies kidnap after taking him to Israel amid family custody battle

Man stunned as Tom Cruise lands helicopter during his hike while filming MI:7 in Lake District

How Strictly's Sara Davies made mind-blowing fortune from university bedroom