Pope Francis wears a face mask during ceremony in Rome

On Friday, Pope Francis will embark on his visit - the first trip by a pontiff to the birthplace of the Eastern Churches. The Pope took to Twitter on Thursday to tell his followers about the three-day pilgrimage.

He wrote: “Tomorrow I will go to #Iraq for a three-day pilgrimage.

“I have long wanted to meet those people who have suffered so much.

“I ask you to accompany this apostolic journey with your prayers, so it may unfold in the best possible way and bear hoped-for fruits.”

Iraq is the only country with a Biblical history which a pontiff has not yet visited. 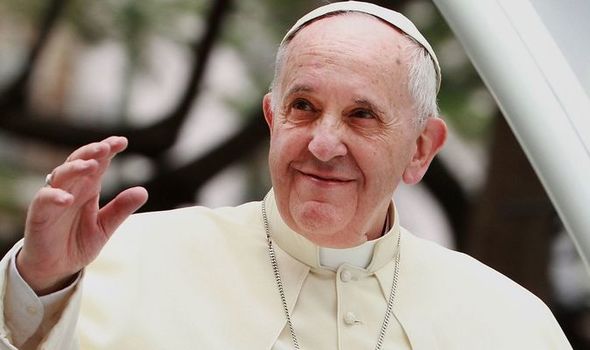 Pope Francis is said to be “walking into the unknown” for his historic trip to Iraq (Image: getty)

However, the Pope’s historic trip comes just days after 10 rockets landed on an air base in western Iraq which hosted US, British and other coalition forces.

Iraqi authorities are reportedly deploying 10,000 police officers and soldiers to protect the Pope from any potential dangers.

The Iraqi Government have also insisted he travel in a bomb and bullet proof car instead of his traditional open top vehicle.

Gerard O’Connell, a Vatican expert in Rome, told The Telegraph: “It is a very courageous trip given all the risks involved. 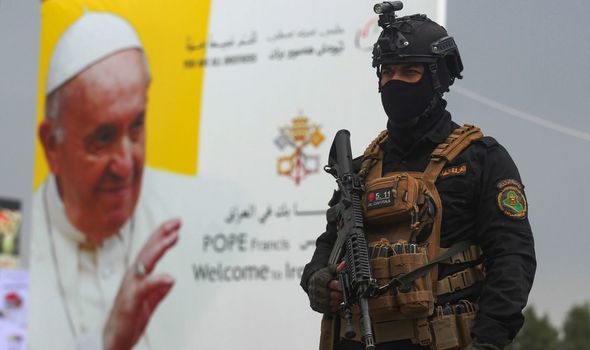 “He’s walking into the unknown. But he has always said that his life is in the hands of God.

“He’s not worried about his personal security.”

The Pope is set to meet some of the 150,000 Christian refugees from central Iraq that sought shelter in the city of Erbil, capital of the Kurdistan Region of Iraq.

Cardinal Louis Raphael Sako, the Iraq-born patriarch of the Chaldean Church, told a news conference on Wednesday: “We hope the visit of the pope will bring some attention to the tragedy of Christians in the East and encourage them to stay. 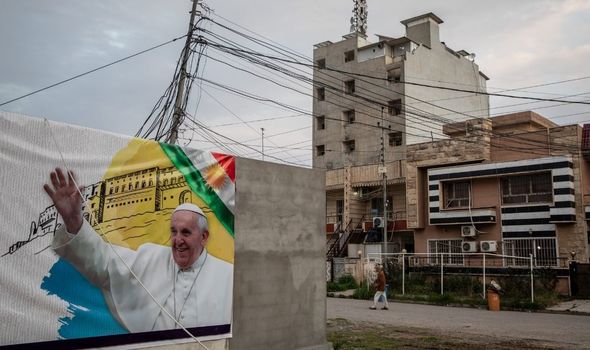 Pope Francis will embark on his visit to Iraq on Friday (Image: getty)

“It will also bring a message of fraternity to the other Iraqi faiths – that religion should not divide but unite and that we are all Iraqis and equal citizens.”

The Pope will visit Baghdad, Erbil, Qaraqosh, Ur and Mosul, the former stronghold of the Islamic State terrorist network.

The visit to Iraq will be the Pope’s first trip abroad in 15 months after several others had to be cancelled due to the ongoing coronavirus crisis.

The Pope is reported to have been vaccinated against the virus and does not want his trip to spark any spread of COVID-19.

Despite this, 10,000 people are expected to attend the final event of his visit which will be an outdoor Mass at a stadium in Erbil.

But reports suggest that numbers on gatherings and masses will be restricted due to the pandemic. 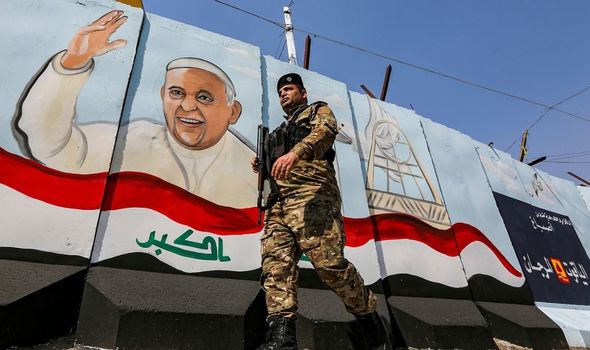 The visit to Iraq will be the Pope’s first trip abroad in 15 months (Image: getty)

Speaking to his general audiences in St Peter’s Square on Wednesday, the Pope said: “It’s been a long time that I have wanted to be able to meet the long-suffering Iraqi people, to have an encounter with the martyr Church in the land of Abraham.”

Since the 2003 US-led invasion on Iraq, the country’s Christian population has dwindled from about 1.6 million to less than 300,000, according to the Chaldean Church.

The Pope is also expected to meet Iraq’s most senior Shi'ite Muslim cleric, Grand Ayatollah Ali al-Sistani, in the city of Najaf.

Mr O’Connell told The Telegraph: “It’s part of his efforts to embrace the Muslim world.

“He believes that Christians and Muslims working together can do great things towards promoting peace.”