PMQs LIVE: Boris demolishes SNP for grovelling to the EU in fiery assault on Blackford

The topic will likely feature heavily in today's meeting in the House of Commons, with the Labour leader pushing the Prime Minister on his plans for a post-Brexit trade deal with Brussels. As has been a reoccurring theme since the election last year, the SNP's Ian Blackford is also likely to demand a fresh Scotland independence referendum following the UK's exit. 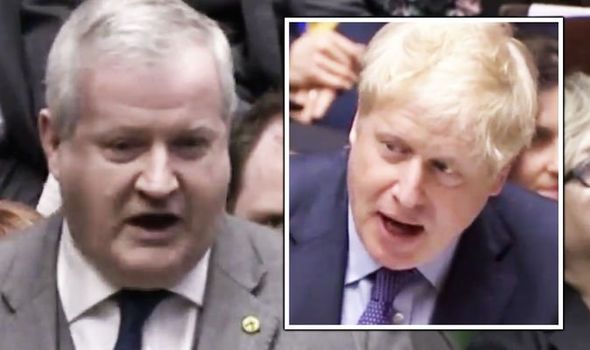 Mr Corbyn's PMQs outings have been lacklustre since last year's December 12 election, with even Labour MPs failing to cheer on their leader as he battles with the Prime Minister at the dispatch box.

With a 78 seat majority in the Commons, Mr Johnson has been buoyant in his recent encounters with the Opposition at PMQs, easily palming off attacks from the other side of the House.

He has promised to seek a trade deal with the EU that would "unleashing Britain's potential".

Mr Blackford will likely once again demand a new referendum on Scottish independence but despite an increase in rhetoric from the SNP on the issue in recent weeks, the party has so far failed to land any punches on the Prime Minister when trying to persuade the public on the case for a fresh vote.

The SNP's leader, Nicola Sturgeon, last week said she was considering legal action to try and force the UK Government into granting her a fresh vote on the future of Scotland.

Mr Johnson said the Government was investing a record 14miillion more into education before taking a swipe at Labour's socialist policies in the general election.

Attacking Mr Corbyn's policies, he said: “We can only do that because we are running a strong and dynamic market economy."

Praising the Prime Minister for getting Brexit done, Bolton North East MP, Mark Logan, has called on the Government to invest in infrastructure in the north of England.

The Prime Minister has long been a fan of improving transport links in the north, he responded by saying he had given the mayor of Bolton "the tools" to make such a link possible.

He added: "Let's hope they build the metro link."

12.16pm update: A call for more to be done to stop knife crime

Warwick and Leamington MP, Matt Western, has said in the past two weeks two people have been killed in his constituency due to knife crime.

He has accused the Conservatives of making the public pick up the bill for the extra 20,000 police officers Mr Johnson has promised to put on the streets to reduce the stabbing epidemic.

Responding, the Tory leader said: "The honorable gentleman is making an important point about violent crime and I share his anger and that's why we're putting an extra 20,000 police on our streets"

He added: "We will get that crime rate down."

Keeping up the pressure of Scottish independence on Boris Johnson, the SNP has once again demanded a second independence referendum.

However, in a passionate defence of the United Kingdom, the Prime Minister said: "Their proposal is to try and rejoin the European Union, to have a different currency they are yet to identify, to have a border at Berrwick and just days after the UK has taken back control of marine wealth, to hand it back to Brussels."

Turning on the SNP's domestic record in government, he added: "They should concentrate on doing a better job for the people of Scotland". 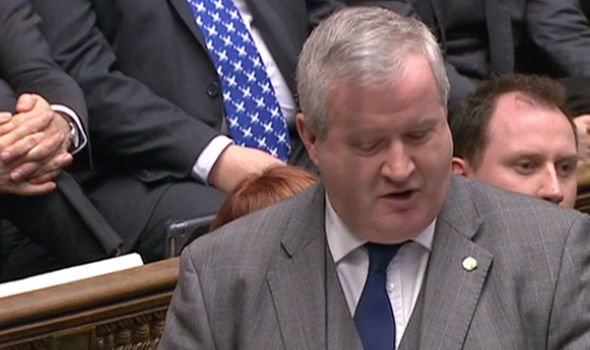 12.10pm update: Boris Johnson attacks the SNP for trying to break up the 'most successful union in 300 years'

The SNP's leader in the Commons, Ian Blackford, asked Boris johnson is he was 'intentionally trying to impersonate Donald Trump'.

The nationalist claimed the Prime Minister has been protectionist in his plans for the future of the UK as part of his evidence for making the compassion.

However, hitting back at Mr Blackford, the Conservative leader said: "I don't anybody who listened to my speech on Monday could mistake if for anything but the most passionate, internationalist, global, outward-looking approach.

"There is only one party in this country that has 'nationalist' in their name. That's them. They would break up the most successfull political partnership of the last 300 years."

After the Labour leader accused the Conservatives of "failing spectacularly" to measure up to the scale of the "climate crisis" the country is facing, Mr Johnson hit back with a full-throttle rebuttal.

The Prime Minister accused Labour of being 'beyond satire' in its attacks on the Government's green record.

He pointed out the UK is the only country in the world to commit to being carbon neutral by 2050.

While mentioning Brexit in his opening question, as he said he would continue to hold the Government to account during the EU trade negotiations, Mr Corbyn chose to focus on climate change for today's debate in the chamber.

Mr Johnson replied by defending the Government's record, saying: "I think if you look at what this Government is achieving and what it has achieved it is quite phenomenal."

Joking about his opposite number he said Mr Corbyn only ever produced "hot air". 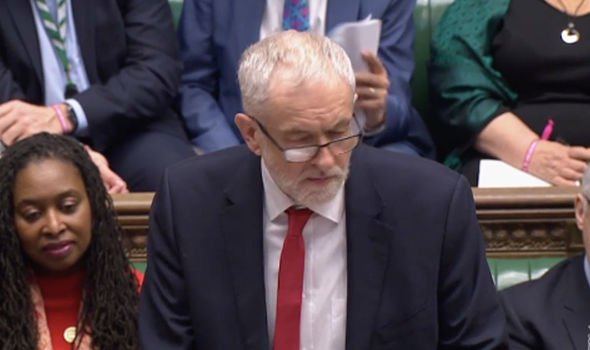 Following praise from one of his backbench MPs for getting Brexit done last Friday, the Prime minister has called for all parts of the UK to come together. He said it is now time to be "united and level up" Britain so the whole country can prosper going forwards.

12.00pm update: And we're off! Boris Johnson gets us underway with praise for the police

Boris Johnson has opened PMQs by praising the police following the Streatham terror attack on Sunday. He said the attack proved there was a need for more to be done to protect the police and the public fro extremists.

Speeding driver who killed girl, 8, on her way to see Christmas lights jailed

Why has Storm Jorge not been called Storm Ellen?

Proposals for relief roads are rejected by planning inspector