Emergency services are currently on the scene at Kirkwall Road to evacuate residents and put the blaze out. The thunderstorm hit the city around 8 pm and brought heavy rain and lightning strikes. Videos have begun circulating on social media of the blaze as residents fear the massive blaze could spread to connected houses.

Head of Content at Plymouth Live Sarah Waddington reported from the scene the unfolding events.

She wrote on her twitter page: “Fire threatening to spread to the houses next door.

“Smoke can be seen coming from the roof.” 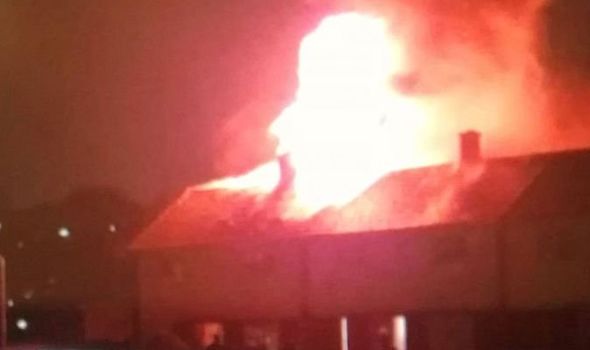 An estimated six appliances including an aerial ladder platform are battling the blaze.

Flames are burning within the house but not as viciously as they were after the initial lightning strike.

Firefighters have been seen inside the property with head torches as smoke has caused low visibility.

Storm chaser Twitter page KentHC_WX also posted a video of the house shortly after the blaze broke out.

They wrote: “House on fire due to lightning strike in Crownhill, North Plymouth from a freak thunderstorm in the area.

“Hope everyone is okay.”

A Kirkwall road resident commented on the news of the fire on the Plymouth live Twitter page.

Steve Minns said: “This was cross the road from me, pretty savage fire.

“Struck our house with an almighty bang, killed the tv and internet box, literally everything downstairs."