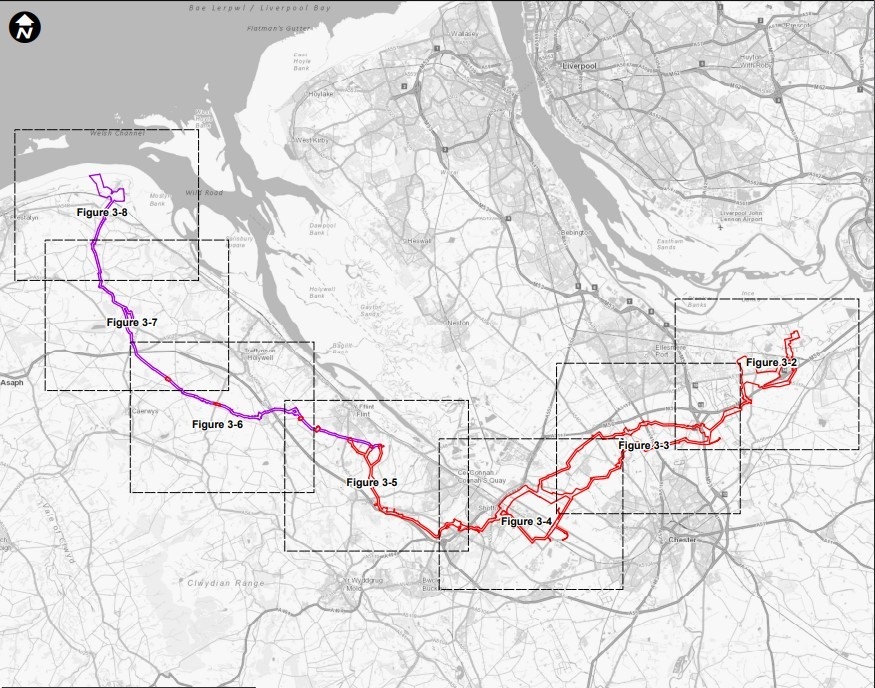 The pipeline route from England through Wales.

A proposed pipeline from a massive hydrogen production plant in the north-west of England will carry waste carbon through Wales to be dumped off the coast.

A scoping document submitted to Denbighshire council is inviting the authority to comment on the scheme which will see the waste carbon dioxide ferried along pipes from the north-west of England to a new facility at Point of Ayr.

There it will be pressurised, compressed and stored within existing oil fields off the Flintshire coast.

The pipeline will carry the waste carbon from a 30TWh/yr hydrogen power facility which is planned for Stanlow in Cheshire by 2030. It will produce 30 trillion watt hours of energy annually, enough to power the whole of Scotland for a year with some to spare.

The scheme’s applicant is Liverpool Bay CCS Limited and it will be called the HyNet North West Carbon Dioxide Pipeline.

It will require permission from the UK Planning Inspectorate for the major infrastructure project, with the possiblility of some land needing to be taken using compulsory powers to make it all happen.

Some existing gas pipelines in the north-east of Wales will be re-purposed to accommodate the carbon dioxide, with up to four block valve stations with secure perimeter fencing will be installed along the route.

The pipeline will run around Deeside Industrial Park, through the Flint Mountain site of special scientific interest (SSSI) and across the River Dee special area of conservation (SAC) and SSSI.

The Stanlow to Flint section will be able handle up to 10 million metric tonnes of carbon dioxide each year.

An “above ground installation” will be located on land north-west of Connah’s Quay and south of Flint – called the Flint AGI.

The technology is called carbon capture storage (CCS) and mirrors a project being developed on Humberside.

Pipes measuring between 20 and 36 inches in diameter will run from Stanlow and other industrial sites in north-west England – and feed into the CCS system.

The approach to storing the greenhouse gas most associated with global warming is used successfully at the Hawiyah oil field in Saudi Arabia.

Each day 40 million standard cubic feet of carbon dioxide is transported to the Uthmaniyah oil field and injected into the oil reservoir there.

It leaves the carbon underground and away from the atmosphere while also keeping up the oil pressure in the field.

A similar project to the one suggested for north-west England and the north of Wales is being developed to start hydrogen production and CCS near Hull on Humberside by the mid-2020s.

Carbon dioxide from industry on Teeside will also be deposited as part of the same scheme, in oil fields off the East Yorkshire coast, with the aim of making the area carbon net zero by 2040.

Denial of responsibility! The World News is an automatic aggregator of the all world's media. In each material the author and a hyperlink to the primary source are specified. All trademarks belong to their rightful owners, all materials to their authors. If you are the owner of the content and do not want us to publish your materials, please contact us by email [email protected]dnews.net. The content will be deleted within 24 hours.