Sunday’s disgrace is Thursday’s saving of face. At Elland Road, Nicolas Pépé had cracked under the pressure of a rare Premier League start and incurred his manager’s wrath with an idiotic red card. In Molde he was given an immediate chance to confirm he had learned his lesson and, knowing he would be under the harshest of spotlights, this time mastered the occasion perfectly.

Pépé scored a fine opener for Arsenal during a turbo-charged start to the second half that quickly brought another goal for Reiss Nelson. It was a deserved reward from a performance in which he appeared to heed Mikel Arteta’s pre-match exhortation that his long-term future is completely in his own hands, and vindication for those who see an immense talent beneath sometimes wayward levels of application. Arsenal secured early qualification from Group B into the bargain and, when the highly rated striker Folarin Balogun spun and added a third within moments of arriving as a substitute late on, a satisfying night on Molde’s tricky artificial pitch was sealed.

Molde had kept Arsenal at arm’s length for half of their meeting at the Emirates three weeks ago, taking the lead before shooting themselves in the foot with two own goals and ending up comfortably beaten. One of those who had erred, the centre-back Sheriff Sinyan, could hardly have asked for a better chance to make amends than the one he spurned in the 15th minute here. Sinyan had stayed up after a corner and, when Eirik Hestad drilled a ferocious centre back across to the far post, looked certain score. It seemed harder for Sinyan to miss as he ran in but he only succeeded in sending the ball across goal and against the body of a surprised Alex Rúnarsson, his woe compounded by a painful-looking collision between his groin and the upright.

A watchable first half had already flickered at the other end. Within two minutes Ainsley Maitland-Niles chipped towards the far corner and demanded that Andreas Linde tipped over. The Molde keeper was called into action more pressingly moments before Sinyan’s aberration when Alexandre Lacazette, starting in the No 10 position, slipped Nelson in for a shot that was repelled with an outstretched leg.

That was the closest Arsenal came in the opening period, although an energised Pépé served some notice of what was to come. The best of several early forays from the Ivorian brought a 50-yard run and shot that, on his favoured left foot, was curled wide from the kind of position he has better exploited in the past. 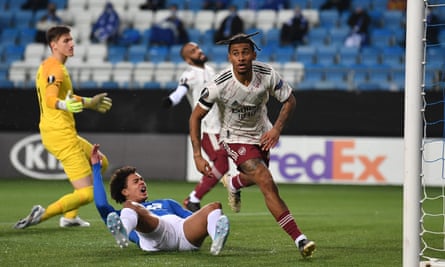 Encouraged by a smattering of socially distanced fans, Molde occasionally threatened to stretch Arsenal again. Fredrik Aursnes was unable to make meaningful contact on a cross from Birk Risa while a goalbound effort from Magnus Wolff Eikrem was blocked by Granit Xhaka. Although Sinyan had to brilliantly defend a cross from Nelson, who was bright throughout, Arsenal’s early promise had waned by the interval.

It reignited decisively within minutes of their return. First Pépé came agonisingly close to a goal of the season contender. He shuddered the bar with a vicious strike from 25 yards and, given the move had begun on Arsenal’s own goalline before being sped up by Nelson, the complete sequence had it all. Not to worry: Molde had not fully cleared their lines when Maitland-Niles’ delivery just evaded the straining Stian Rode Gregersen and reached Pépé, whose immaculate first touch set him up for a whipped finish into the far corner.

The heat had been turned up and Molde could patently not cope. Joe Willock might well wish to discard the tag of Europa League specialist and had looked constrained until the change of ends. Now he galloped down the right flank and, anticipating Nelson’s angled run perfectly, fizzed a tantalising low centre that was jabbed home from inside the six-yard box.

Eddie Nketiah should have added to the tally but headed waywardly; Balogun made no such mistake with his first touch after replacing him and might be fancied for a first start with little at stake against Rapid Vienna next week. Arsenal could happily get used to such serenity.

Zlatan about 0:3 with Atalanta: We should go for the result, but we couldn't. No excuses
Ramos and Perez have a very strange relationship. Sergio knocks out new contracts, and Florentino arranges media wars
Ronald Koeman: If we don't beat Cornelius in 90 minutes, I have to say what I see. Otherwise, it is better to find another coach
Antonio Conte: The Scudetto or the Champions League is more important than the Italian Cup, but we will try to beat Milan
Golovin about 2 assists in the game with Marseille: The merit of the whole team - we work hard on the standards
Valencia can sign forward Bordeaux de Preville in the summer for free
Ole Gunnar Solskjaer: I've never had a problem with Pogba. He is frank and honest with me
Source https://www.theguardian.com/football/2020/nov/26/molde-arsenal-europa-league-group-b-match-report

The Observer view on Russia’s protests against Putinism | Observer editorial