All people over the age of 23 can book Covid jabs from tomorrow, as ‘freedom day’ is delayed by four weeks.

Millions across England had hoped all social contact rules could be lifted on June 21.

But this dream was crushed today as Boris Johnson warned the country needs more time to beat back the Delta variant, first discovered in India.

The Government is now aiming to offer first vaccine doses to all adults to coincide with the new ‘freedom’ date of July 19, rather than July 31 as initially planned.

It is hoped around two-thirds of adults will be fully vaccinated by then.

People aged 23 and 24 can book jabs from tomorrow morning after the vaccine programme was opened to all people aged 25 and above last week.

It comes as a new study suggests two vaccine doses provide strong protection against the Delta variant, which is responsible for 90% of Covid cases in the UK.

The strain is feared to be 40% to 60% more transmissible than the Alpha variant first detected in Kent, and is believed to double the risk of hospitalisation. 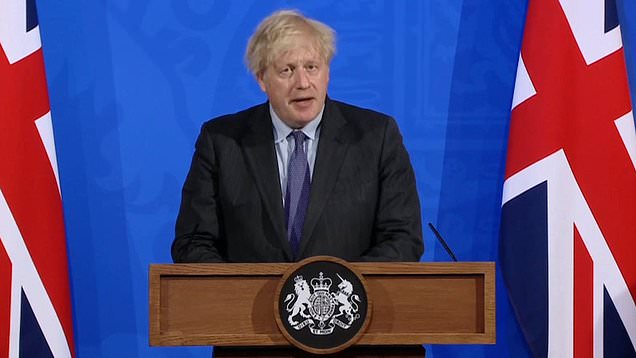 However, the Pfizer-BioNTech jab was found to be 79% effective – compared with 92% against the Alpha strain – at least two weeks after the second dose.

The Prime Minister’s official spokesman said: ‘Spi-M modelling suggests if we were to go ahead with Step 4 on Monday there’s a possibility of hospitalisations around the peak of the first wave.

‘But vaccine effectiveness especially after two doses means thousands more deaths can be prevented if people are jabbed.

‘This will mean around two-thirds of adults will have been offered two doses, reducing the risk of hospitalizations and deaths.’

Man City will not be able to sign Kane after the transfer of Grealish. The club does not have such money (MEN)
16-year-old Borussia forward Mukoko wanted to end his career because of talk about his age
Laporta visited the location of Barca in Germany and greeted the players
Chernomorets from FNL-2 will be awarded the 3rd technical defeat in a row due to quarantine
Christian Pulisic: Mental health is important. I turned to a psychotherapist, there is nothing to be ashamed of
Arjedo Braida: I would give the Golden Ball to Jorginho or Donnarumma. But Messi is Messi
Flick has started working for the German national team: I will do everything so that we play exciting football

Where to get the best fish and chips in Wales

Who holds the 100m world record and Olympic Games record?

Senate expects to move forward with infrastructure bill on Sunday

Teen writes to world leaders asking them for life advice

Breakneck pace of crises keeps National Guard away from home