The parents of a murdered British backpacker endured a second tragedy five years later, when another of their daughters died while she was pregnant, an inquest has heard.

Laura Daniels died in hospital on September 16, 2019, after years of complications following surgery.

Five years and one day earlier, her sister Hannah Witheridge, 23, had been found dead on a beach in Thailand.

The brutal killing and rape of Miss Witheridge, from Norfolk, and murder of another British tourist, David Miller, shocked the country and badly damaged the reputation of Koh Tao, later dubbed ‘death island’.

Monday’s inquest into the death of Mrs Daniels, 30, of Great Yarmouth, heard from a surgeon apologising to her parents Tony and Sue Witheridge.

Mrs Witheridge wept at one point in the hearing and said: ‘You lose one daughter, you don’t expect to lose another.’

Aabir Chakraborty, consultant neurosurgeon at the hospital, explained that Mrs Daniels was treated for hydrocephalus – a build-up of fluid in the brain.

He said: ‘It just felt so unfair that she kept on having these troubles.’

Asked by the coroner if he was shocked by Mrs Daniels’s sudden death at Southampton General Hospital, he said she was pregnant at the time and added: ‘I will be honest, I was quite devastated. It was awful.’

He said he did not know what caused her death and, addressing Mrs Daniels’s family, including her widower Lewis Daniels, continued: ‘I just want to say sorry.’

The area coroner for Hampshire, Portsmouth and Southampton, Rosamund Rhodes-Kemp, told him: ‘I don’t think you could have done any more than you did.’

The inquest in Portsmouth, attended virtually by the family, heard that Mrs Daniels had surgery in 2011 for the rare condition trigeminal neuralgia, which causes facial pain.

Robert MacFarlane, consultant neurosurgeon at Addenbrooke’s Hospital in Cambridge, said the operation involved making an opening in her skull to access the nerve.

He said Mrs Daniels had a ‘variety of problems’ afterwards, including spinal fluid leaking through the wound, and she required multiple operations.

A post-mortem examination recorded Mrs Daniels’s cause of death as unascertained.

Summarising Mr McFarlane’s evidence, Mrs Rhodes-Kemp said: ‘Laura had a relatively rare condition, particularly for someone of her age, for which the options are medication, which some people don’t get on with, or surgery.

‘The surgery was effective but she did experience complications.’ 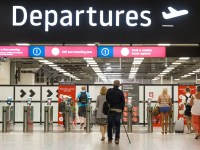 When is the next travel update?

Mr McFarlane said Mrs Daniels had been ‘concerned about the potential side-effects (of medication) were she to start a family in the future’.

She started treatment at Southampton General Hospital from 2015, having her first admission while she was a student locally.

Mrs Rhodes-Kemp adjourned the inquest until August 11 to hear written evidence and to reach a conclusion, as there was insufficient time to do so on Monday.

The bodies of Miss Witheridge and 24-year-old Mr Miller, from Jersey, were found with head injuries.

They had arrived in Thailand separately and met at the hotel where they were staying.

Two Burmese migrants who were convicted over the killings had their death sentences reduced to life imprisonment in 2020, following a trial that drew international criticism from human rights groups.

Lawyers for the two men had claimed evidence used in the case against them was mishandled and they made confessions under duress that they later retracted, raising questions about police competence and the judicial system in Thailand.

Human Rights Watch at the time called the verdict ‘profoundly disturbing’, citing the defendants’ accusations of police torture that were never investigated and questionable DNA evidence linking them to the crime.