Oprah Winfrey is said to be ‘livid’ that Prince Harry’s interview with James Corden was broadcast before her highly anticipated chat with him and Meghan Markle.

The Duke and Duchess of Sussex are expected to be ‘candid’ about their struggles as senior members of the Royal Family in the upcoming two-hour CBS special.

Teasers released on Sunday show Oprah, 67, suggesting Meghan’s time in the UK was ‘almost unsurvivable’, amid tensions in the palace and a war with the British press.

The interview promises an exclusive account of why Harry felt he had to get his family to the US for their own wellbeing, but it appears James has beaten Oprah to it.

Last week a chat between the British TV host and his long-term pal Harry was shown on the Late Late Show.

The Duke lifted the lid on his family’s new life in California, accused the press of ‘destroying’ his mental health, and described how he and Meghan were faced with a ‘really difficult environment’ when they decided to quit as working royals.

It is thought Oprah, 67, isn’t happy at all about this at all, as her two-hour special, due to air on Sunday, is no longer the exclusive she hoped it would be.

Speaking about the clash, the i Paper’s Late Editor Benjamin Butterworth said: ‘I think they were desperate to get their story out there.

‘Anyone that saw James Corden and Prince Harry on Friday, first of all, Oprah must have been livid that he’d already given the line of why he quit the Royals to James Corden so she’s not got that as an exclusive.’

He suggested this would have dented Oprah’s budget as she was hoping to have kept that line for herself.

Butterworth added: ‘So she’s wasted a couple of million there but I just find it utterly extraordinary how a couple that are so rich and have had such a high position in life as the Duke and Duchess can manage to make themselves appear so cheap.’

Harry and Meghan are under increasing pressure to ask either CBS or Oprah to pull or delay the interview while the Duke of Edinburgh, 99, is in hospital.

Prince Philip was admitted to King Edward VII’s hospital in central London on February 16 on what Buckingham Palace said was a precautionary basis.

But on Monday, Harry’s grandfather was transferred by ambulance to St Bartholomew’s Hospital, a specialist cardiac hospital, for testing and observation for a pre-existing heart condition, along with treatment for an ‘infection’.

Royal biographers have said airing it this weekend could set off a ‘diplomatic bomb’, with one saying it would be ‘heartless, thoughtless and supremely selfish’ to go ahead with it’. 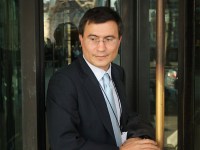 But CBS have confirmed the interview will go ahead as planned, with millions of dollars worth of advertising already sold for the ‘primetime’ special.

With ITV reportedly spending £1million on the rights to air Oprah’s interview in the UK on March 8, Butterworth said much more money is ‘sloshing around in the US’.