Late on Friday afternoon, not too long after Novak Djokovic and Rafael Nadal had stepped out on to Court Philippe Chatrier, a familiar movie was playing out. Djokovic, with a 1-7 record against Nadal at the French Open, had not even beaten Nadal on clay since 2016. There he was, trailing 5-0 while suffering the familiar pain of Rafael Nadal’s forehand tearing him apart.

It is a reflection of Djokovic’s exceptional ability to learn from disappointments and consistently return stronger that on Sunday he is facing Stefanos Tsitsipas for his second title at Roland Garros and a scene-shifting 19th overall slam.

The way that Djokovic met Nadal at the tempo the Spaniard set in those opening games and eventually dictated the match on his own terms is unforgettable. For most of the encounter, he pinned Nadal in his backhand corner constantly and dragged the Spaniard off the court with angles. He had the final word so often. Even after a gargantuan, instant classic of a 93-minute third set that Nadal utterly refused to relinquish, Djokovic took control himself.

Even if he does not win the final, this felt like a status-defining victory. When their careers run their course and the greatest of all time debate is even more pronounced, this match will be one of the clearest arguments for Djokovic’s supremacy.

Despite all Djokovic achieved on Friday night, that was not the end point. He must now forget about it and look forward to the final, where he will face the second-best clay courter in the world before the tournament, a player whose game is built for the surface. This is also clearly the preferential match-up for Tsitsipas, the fifth seed, who will find solace in not having to spend hours desperately trying to protect his single-handed backhand from the might of Nadal’s heavy topspin forehand. 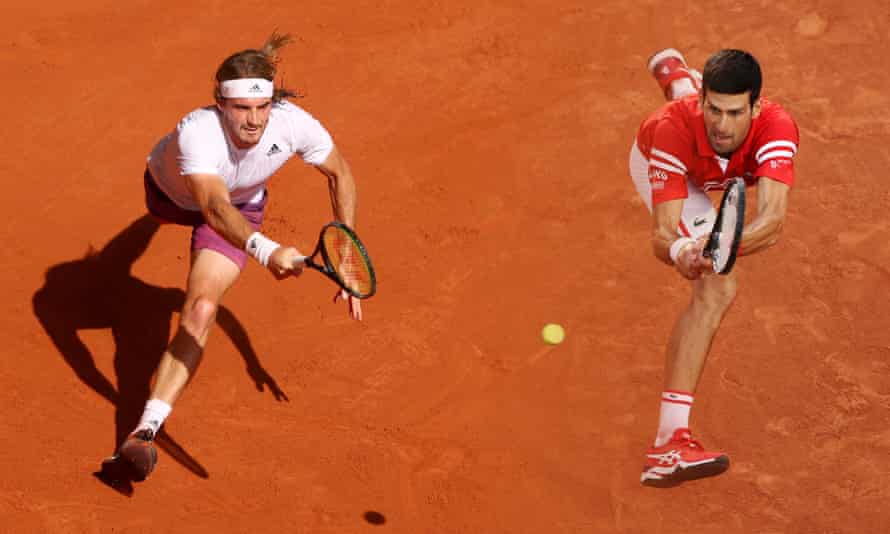 Last year, Djokovic and Tsitsipas faced each other in a semi-final, in which the Serb led by two sets and a match point before the Greek recovered to force a five-set tussle. Then, just a few weeks ago in Rome, Tsitsipas, 22, outplayed Djokovic, 34, and had countless chances to put him away, serving for the match at 5-4 in the third set. He lost his nerve and Djokovic clinched the final three games of the match to win 4-6, 7-5, 7-5.

Both matches, however, showed the damage that Tsitsipas’s game can inflict on Djokovic. He possesses one of the most efficient serve +1 combinations – the first shot after the serve – and his forehand is one of the best in the world thanks to its early strike, its relentlessness and its angles. It is complemented by his unrelenting determination to finish points off at the net, delicate hands and excellent movement, particularly on clay. He has everything he needs to defeat Djokovic.

Tsitsipas, now the first Greek to reach a grand slam singles final, has improved immensely in the eight months since they met here. This year his win-loss record is 39-8 (83%), with 10 more match wins than anyone else on the ATP, and he has been No 1 in the race since he collected his first Masters 1000 title, at Monte Carlo. That nobody else can touch those stats is partially the result of Djokovic and Nadal focusing on the big tournaments, but it underlines Tsitsipas’s fast-improving consistency.

Beyond the steady overall improvement of his game, it is clear that Tsitsipas has moved to another level mentally. Last year, in the dead of night during a crowdless US Open, Tsitsipas lost to Borna Coric in the third round after holding six match points, completely melting down as he screamed at his father in the stands. However, as he squandered a two-set lead in the biggest match of his career against Alexander Zverev on Friday, he remained positive and found a solution. The next one, his first ever grand slam final, is infinitely bigger and it will reveal even more.