The video posted on Twitter, shows mourners at a funeral service helming in Melmount chapel in Strabane, Northern Ireland, suddenly fleeing the scene after a loud bang initially believed to be a gunshot. Northern Ireland Police Services later released a statement confirming there was no evidence of gunshots fired. 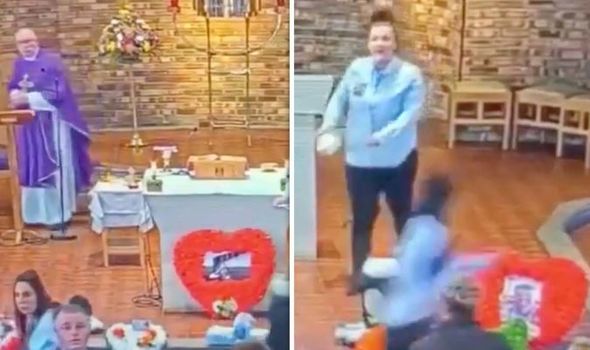 The statement read: “Two males 32 and 17 have been arrested following a disturbance at a funeral in Strabane this morning.

“No serious injuries were reported.

“A number of weapons including Stanley knives and a hatchet were seized.

“We are aware of suggestions online that shots had been fired at the church on the Melmount Road however there was a proactive police operation in place at the location and no evidence of shots having been fired were noted.”

Best towns and villages to live in and around Liverpool

Roche and Welsh Government at loggerheads over Covid-19 testing deal

Paramedic says staff 'terrified' of going to work at the moment

Aldi manager speaks out after embarrassed nurse left in tears

‘Up to 80% of coronavirus patients on ventilators will die’, volunteers told