The world-exclusive interview with the former US President touched on a string of issues including the Duke and Duchess of Sussex, Boris Johnson, Afghanistan, the Capitol Hill insurrection, and whether he would run again in 2024. The tell-all conversation, which was broadcast 7pm Wednesday night, beat the average viewership of both the BBC and Sky. Shortly after the interview had started, GB News stood strong at 208,500 viewers - a figure which held steady for the next hour.

Mr Farage's friendship with the former-US President stretches back to 2016 when the then-UKIP leader became the first UK politician to meet Mr Trump after his election victory.

At the time, Mr Trump's campaign manager Kellyanne Conway told the press that the pair talked about "freedom and winning".

"They really enjoy each other's company," she added.

In the years that followed the two remained close and Mr Farage accompanied Mr Trump to rallies on his re-election campaign trail last year. 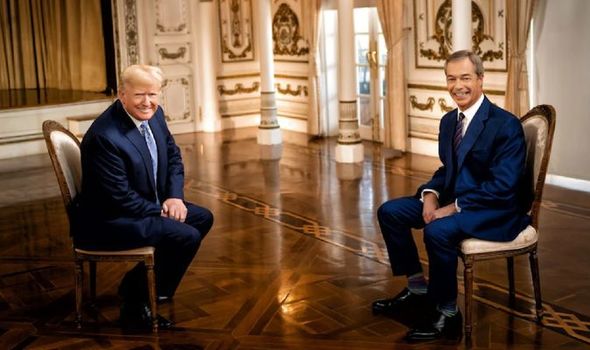 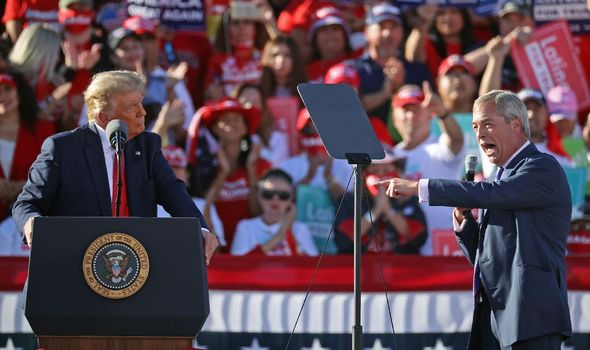 Mr Farage acknowledged this friendly relationship at the start of the wide-ranging two hour special.

He said: “There’s no pretending. I’m a friend and a supporter.

"This did not stop me asking the important questions.”

Speaking about Meghan, the Duchess of Sussex, Mr Trump said: “I’m not a fan of hers. I wasn’t from day one, I think Harry has been used horribly and I think someday he will regret it.

“I think Harry’s been used and been used terribly.

“I think it’s ruined his relationship with his family, and it hurts the Queen.”

Mr Farage lamented that the Queen had been unable to attend a number of engagements in recent weeks due to medical advice which suggested she slowed down her busy schedule.

Mr Trump replied: “Hopefully she is not very ill though. I’ve been watching it closely because I love her. I think she’s great.”

Similarly unable to escape the ex-president's criticisms was Boris Johnson.

More predictably, current US President Joe Biden was harshly criticised for a string of reasons including his responsibility for "the most embarrassing moment in the history of the country" - the Afghanistan withdrawal. 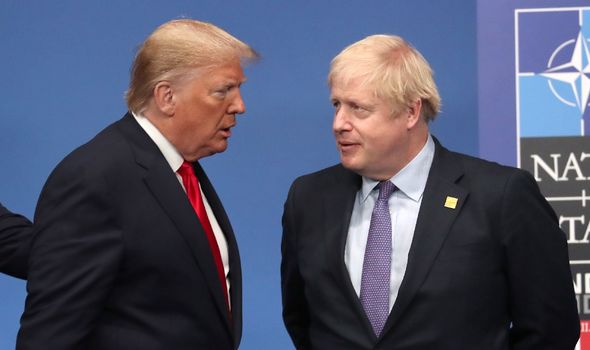 Boris Johnson 'has gone a little on the liberal side', according to Trump (Image: GETTY) 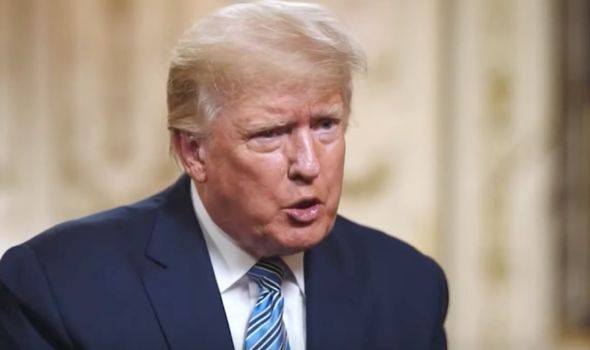 Responding to questioning about the Capitol Hill insurrection, Mr Trump admitted that "some bad things happened".

However, he claims that Nancy Pelosi rejected his suggestion that an additional 10,000 National Guardsmen be drafted in to protect the building on that day.

He also hinted at running for election in 2024, saying: “If you love the country you have no choice”.

The record-breaking evening comes for GB News as flagship shows such as Farage, Brazier and Dewbs & Co are attracting a more consistent audience.

The flagship shows are helping GB News beat Sky News in some timeslots and battle the BBC in others.

The new uptick in support seems to have filled GB News with confidence as they launch a campaign to expand their viewership even more.

On Monday the news station parked an advertising van outside New Broadcasting House, the BBC's headquarters in central London, with the message: “We ask the questions you'd ask. BBC News doesn't. It's time to change channels.”

Trace elements essential when drying off

Harry Styles is coming to Manchester for his UK Arena tour

ADVERTORIAL: Quiz: Find out how much you really know about your rights if you rent your home

Woman saves £6,000 a year by giving up her social life and slashing all her bills

Voices: LinkedIn seems to be on a mission to kill off good writing

What is ‘plan A’, when is it returning and what Covid rules have changed?

Seven Premier League legends who could return in January transfers like Hazard, Suarez and Balotelli

Teenager, 14, from Darlington becomes one of youngest Britons convicted of terror offence

Florida on pace for smallest orange crop in over 75 years

Robert Hendy-Freegard: Who is the conman and fake MI5 agent profiled in Netflix documentary The Puppet Master?

Britain's Got Talent 2022: Start date, judging panel and how to get audience tickets

I found out my neighbours built their extension on my land, they now want to do a land swap to pay me back

Blackpool FC star, 24, ‘raped teen girl, 18, after inviting her to Netflix and chill’

Escape is confirmed for Swansea's Singleton Park for summer 2022

Are Kanye and Paul McCartney friends?