MSPs are set to vote on Scotland's new five-level system of lockdown restrictions in the Scottish Parliament today.

Members of parliament on all sides of the house will debate the plan drawn up by the government to place different parts of the country into a tiered system similar to the one in England.

If approved the system will come into force on November 2.

It comes as a leaked letter revealed that north and south Lanarkshire are set to head into the highest level when the restrictions are implemented.

Infection levels in Dundee are also causing concern and the city could face greater curbs by being placed into level 3.

Glasgow and Edinburgh face no change by staying at level 3.

Yesterday it was announced by Nicola Sturgeon that one person had died in the last 24-hour period from coronavirus, while 1,122 people had tested positve.

To stay up to date with the latest news in Scotland, sign up to our  newsletter.

Five tier plan to be debated Plans to introduce a new five tier framework for lockdown will be debated by MSPs at Holyrood today after a leaked letter revealed how it could be implemented across Scotland.

Level four - the toughest level of restrictions - could be imposed on North and South Lanarkshire while Glasgow, Edinburgh and Dundee are moved to level three.

READ MORE: Nicola Sturgeon to give Five Tier local lockdown details today as plans due to be rolled out in Scotland

What time is the briefing? 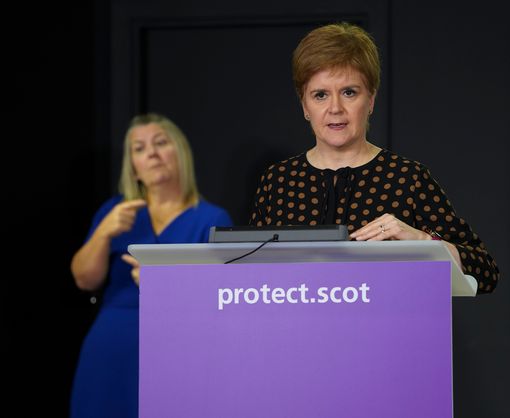 Nicola Sturgeon will give her daily coronavirus update at around 12.15pm today.

The First Minister will be announcing the latest number of cases across Scotland from St Andrew’s House in Edinburgh.

The announcement will be live on BBC One Scotland and the BBC Scotland channel.

We’ll keep you up-to-date with everything happening in Scotland regarding the coronavirus pandemic.

MSPs will debate and vote on the proposed tiered system of coronavirus restrictions for the country.

Stay tuned to our blog and we’ll give you all the latest information you need about what’s going on across Scotland.

Merson on Kane: there is No other player like that in the world. Messi is only a tenner. And Harry is already playing like de Bruyne
Ajax overloaded the young Williams and was sharper before Onana's mistake. Liverpool were helped by Klopp's original half-time decisions
Messi was fined 600 euros for a shirt in memory of Maradona, Barca-350 euros
Zidane will not be sacked. Real Madrid have full confidence in him (As)
Zidane's future at Real Madrid is in question. The coach is not as confident as before (Marca)
Marcel Villas-Boas has snapped a record 13-game losing streak in the Champions League. And for the first time I scored in this draw
Queiroz dismissed as coach of the national team of Colombia
Source https://www.dailyrecord.co.uk/news/scottish-news/nicola-sturgeon-coronavirus-update-live-22911438