FOR my final column of 2019, I present my annual awards – aided and abetted, as ever, by the invaluable feedback you send my way each week.

It wouldn’t be the same without you – so, thank you, have a wonderful Christmas and Happy New Year, and see you back here in January.

Notable mention: The Duke and Duchess of Sussex proselytising to the rest of us on doing our bit to combat climate change then hopping on a private jet to Uncle Elt’s time-share in France.

Runner-up: Dame Emma Thompson who, shortly after joining the Extinction Rebellion protests and telling us all to “fly less”, hopped on a BA flight to New York where a fellow First Classer filmed her champagne consumption. According to one report, her share of the carbon dioxide generated by the flight was: “The same as that emitted by heating an average house for nine months.” Or indeed the hot air emitted by Dame Emma.

Winner: All the A-list luvvies who travelled on yachts and private jets to the “Google Camp” in Sicily to discuss how the hoi polloi (that’s us) can do their bit for climate change. Better still, hotel guests were told by police to avoid looking out of their windows to protect the privacy of the slebs dining al fresco while no doubt discussing their hopes for a world without borders, where everyone is treated the same . . .

Notable mention: Busted flush Jeremy Corbyn who, shortly before he vanishes into well- deserved obscurity, tells us that Labour has “won the arguments and rewritten the terms of political debate”. Laughable.

Runner-up: Prince Andrew who, the day after his car-crash interview with Newsnight’s Emily Maitlis, reportedly told The Queen: “I think it went well.” The following day’s coverage told him in no uncertain terms that it hadn’t.

Winner: Liberal Democrat leader Jo Swinson, who declared grandiosely that she was “Britain’s next Prime Minister” but turned out to be Britain’s next former MP looking for a new job.

Virtue Signaller Of The Year

Notable mention: Student Shelby Judge, who says Mr Men character Mr Clever telling Little Miss Curious how the Forth Bridge got its name makes him “Mr Mansplain”. Let me womansplain . . . no it doesn’t. It’s merely an adult teaching something to a child. Sigh.

Runner-up: The Countryfile viewers who questioned why a special episode was called One Man And His Dog when three out of the four handlers were female. Er, because the show it’s based on has been called that since 1976 and, besides, One Man, Three Women And Their Dogs And Bitches doesn’t exactly trip off the tongue.

Winner: The 198 people who complained to TV regulator Ofcom when Love Island contestant Amy Hart was seen crying after being dumped by (don’t laugh) “half-boyfriend” Curtis Pritchard. Seriously? Fleeting heartbreak is part of life’s rich pattern, not a matter for the authorities. Let’s hope that the complainants get some perspective for Christmas.

WORKINGTON Man and everyone else who voted for Boris and freed this country from the paralysis of the past three and a half years; all those who selflessly chased after the London Bridge killer to make sure he didn’t harm others; Queen guitarist John Deacon living the quiet life while still raking in money from the movie Bohemian Rhapsody; James Middleton opening up about his depression; Burnley plumber James Anderson who carries out free repairs for the elderly; Andrew Neil for his superb pre-election interviews; cricketer and Sports Personality Of The Year winner Ben Stokes; Greta Thunberg who, whatever critics think of her, is undoubtedly the voice of a generation; The Duke and Duchess of Cambridge for just dutifully getting on with the job; ditto The Queen and Princess Anne.

EVERYONE who promoted the cult of Corbynism, now a dead duck; Tom Watson and all those who believed arch fantasist Carl Beech; John Major for calling on the Government to revoke Article 50; hit-and-run driver Anne Sacoolas, who fled to the US after the death of Harry Dunn; the Fyre Festival influencers who sold punters a pup; Blake Fielder-Civil for making a £1million claim against Amy Winehouse’s estate; the extinction Rebellion mob; George Michael’s ex Fadi Fawaz; Underboob swimwear; Jeffrey Epstein and Ghislaine Maxwell; Harvey Weinstein; “businessman” James Stunt and his fake paintings; Paul Hollywood trying to slap a NDA on his ex-girlfriend; Adil Rami for cheating on Pamela Anderson; off-grid dad Matt Allen, who says: “Full-time work is not in my psyche”; the theatres warning about scenes involving smoking or knee-touching; Steve Coogan calling Conservative voters “ill-informed” and “ignorant”; the neighbours who recorded the argument between Boris Johnson and Carrie Symonds and gave it to The Guardian.

Notable mention: The devotees who happily shelled out £1,000 a day to attend Gwyneth Paltrow’s Goop Health wellness summit in the UK, where they were treated to a mere glimpse of her loveliness and advice on how to “create a new version” of themselves. Hopefully one that learns to see through the overpriced schtick.

Runner up: Former Blue Peter presenter Konnie Huq’s on-air meltdown at a Brexiteer, angrily screeching whether he would vote to leave the EU if, er, it meant he would be decapitated in the process. The only one losing their head was her.

Winner: Amanda Liberty, from Leeds, who, thanks to being an “objectum sexual” (nope, me neither) married a chandelier-style light fitting. Dim & Dimmer?

Optimist Of The Year

Notable mention: Star Trek’s William Shatner who is divorcing his fourth wife, of 18 years, at the grand old age of 88.

Runner-up: The proposed “dream team” of Rebecca Long-Bailey and flatmate Angela Rayner to lead Labour into the next decade. A dream, perhaps, for the Tories, but a potential nightmare for any Labour moderate seeing the party they love decimated by political pygmies.

Winner: Current I’m A Celeb queen Jacqueline Jossa, who says she has forgiven husband Dan Osborne over reports of cheating allegations and says she wants “to hit the restart button”, while he says he will “spend the rest of my life being the best husband and dad I can be”. Better late than never, I suppose. Let’s hope Jacqueline doesn’t spend the rest of hers regretting her decision. 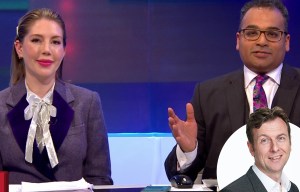 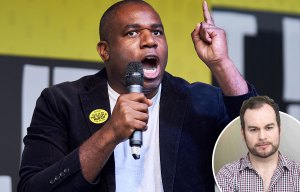 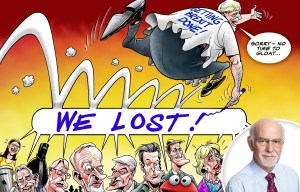 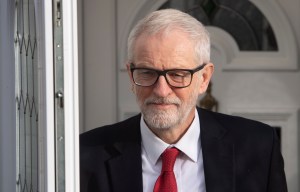 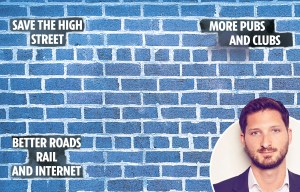 Notable mention: Jennifer Arcuri, who shared a “close friendship” with Boris Johnson when he was Mayor of London but says she has now been ghosted, “like I am some gremlin”. She adds, somewhat ominously: “Why would I remain silent if you can’t even speak to me?” Prime Minister, you have been warned.

Runner-up: Gemma Collins – aka The GC – taking on Dancing On Ice’s Mr Nasty Jason Gardiner for “selling stories on me” and being “booooooooring!” An ice queen personified and glorious to behold.

Winner: Coleen Rooney who, after investigating which friend had been leaking stories from her private Instagram feed “for years”, concluded that they were using . . . “Rebekah Vardy’s account”. Cue national intake of breath and the birth of Wagatha Christie.