The Tokyo Volcanic Ash Advisory Centre has issued an alert for a "possible eruption" for the volcano in the Philippines. 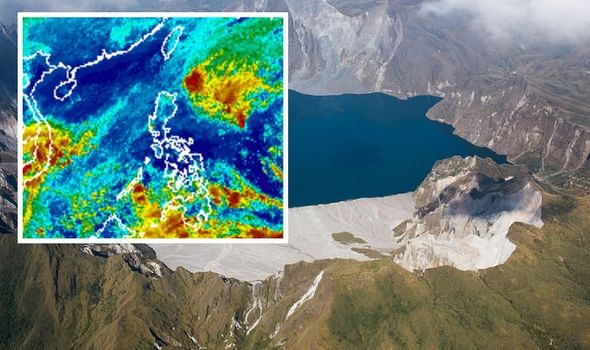 To which meteorologist Kyle Noël replied: "Yeah, this is a suspicious volcanic activity that's going on at Mt. Pinatubo.

Mr Noel shared an image from the Himawari-8.

He later responded that he thought it was "convection created by orographic lifting rather than a volcanic eruption".

He noted: "There was a ripple of clouds moving through these mountains.

Usloping/orographic lifting could explain a sudden burst of convection in that area rather than a volcanic eruption.

"A couple of reasons to doubt the alert, lack of earthquakes from seismographs and lack of local reports.

"Anyone on the ground able to confirm whether there’s been an eruption?"

Covid restrictions set to be lifted from 6am on Saturday

Energy giant E.ON slammed by shop worker for sending socks to help her use less fuel

How much money will my child's school lose? Use our interactive tool to find out

Woman wandering the streets approached by 'angel' after disaster date

Deadline call from Lanarkshire councillor over much needed housing repairs

Millionaire tried to sue neighbour for not putting up curtains in £3.2million flat

Ireland’s pubs and restaurants report ‘apprehension’ ahead of expected reopening

Next of kin appeal after death of David Owens, 68

Channel 4 8 Out of 10 Cats Does Countdown: Jon Richardson's comedian wife and famous flatmates

Mum confesses to killing disabled daughter, 24, by slowly starving her to death

Powerful magnitude 6.4 earthquake strikes off the coast of Japan

ADVERTORIAL: Why Hull College’s open day is the perfect way to find out what student life is really like

Nanoplastics have now invaded both Arctic and Antarctica, researchers find