Moorland fire breaks out near quarry in Bacup

FIREFIGHTERS are at the scene of a large moorland fire.

The fire broke out on Newchurch Road, close to Lee Quarry, in Bacup, at around 3.40pm yesterday.

Crews from across East Lancashire were helped by colleagues from Greater Manchester Fire and Rescue Service to tackle the fire.

The fire was under control by around 6pm and firefighters ceased damping down at the incident shortly before 10pm last night.

They have monitored the moorland overnight and crews have returned this morning to identify any further hotspots. 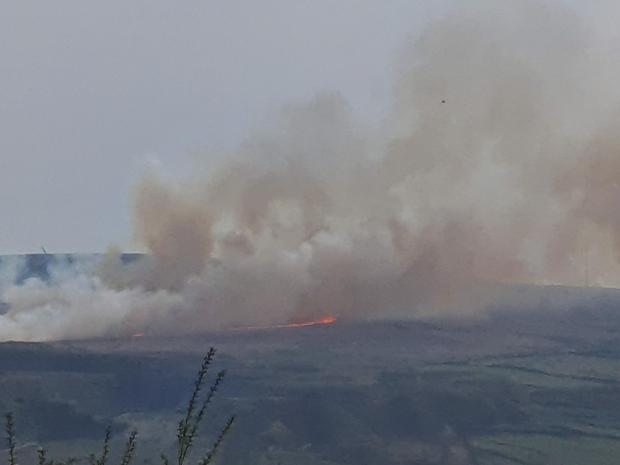 Mr Johnston said: "Many fire services are busy dealing with these types of fires at the moment due to the dry conditions.

"Please be extra careful and vigilant."

The fire service said in a statement last night: "Ten fire engines including colleagues from Greater Manchester Fire and Rescue Service, along with specialist wildfire units and the air support unit are in attendance at a moorland fire on Newchurch Road, close to Lee Quarry, in Bacup.

"Approximately one mile of area is affected.

"The wildfire burn team is carrying out tactical burning assisted by firefighters using blowers and beaters to bring the fire under control."

It is thought that the extra dry conditions following a hot Easter weekend have contributed to the incident.

The fire service has also issued advice about how to prevent wildfires during dry weather.

While if people live close to woodland or heathland, they should not burn off garden rubbish during hot weather and report any evidence of illegal firesetting activity.

This fire follows an incident yesterday which saw two engines called to a blaze in Whitworth shortly before 6pm where there was a small peat fire.

Setien on Messi's rest: Of course, he needs it. But the score in the match against Valladolid was too slippery
Immobile – the fans of Lazio: Some people seem to have too short a memory. Leave my family alone
Holand was kicked out of a nightclub in Norway
Zinedine Zidane: real is real. The most important club in history
Nuremberg miraculously remained in the second Bundesliga. We scored in the joints on the 96th, both teams sobbed
Griezmann will miss Barca's last two games in La Liga. He was out for at least three weeks
Inter midfielder Brozovich was stripped of his driver's license. He was driving a Rolls-Royce under the influence of alcohol
Source https://www.lancashiretelegraph.co.uk/news/17592480.moorland-fire-at-lee-quarry-near-bacup/?ref=rss

What is Primodos and what was the birth defect scandal linked to the drug?