Gordon Elliott said on Monday evening that “it absolutely breaks my heart to hear people say that I have no respect for my horses” and that he will spend his life paying for “a moment of madness”.

His comments came in an interview with the Racing Post published shortly after the British Horseracing Authority banned the trainer from sending runners to Britain, pending the outcome of an inquiry by the Irish Horseracing Regulatory Board (IHRB) into a photograph of Elliott sitting on a dead horse on his gallops which circulated on social media on Saturday evening.

In the interview with racing’s trade paper, Elliott said that his actions after Morgan, a horse owned by Michael O’Leary’s Gigginstown Stud operation, had died on his gallops in 2019, were “indefensible”, adding: “Whether alive or dead, the horse was entitled to dignity. A moment of madness that I am going to have to spend the rest of my life paying for and that my staff are suffering for.”

Elliott also told the Post that his “whole life has revolved around horses since I was a child. I know nothing else. Horses are all I have. I came from nothing and built a dream”.

“When your world starts crumbling in front of you, it’s a scary place to be. I just hope people can understand how truly sorry I am and find some way to forgive me for what I have done,” adding: “I can guarantee that this will never happen again to any animal, alive or dead.” 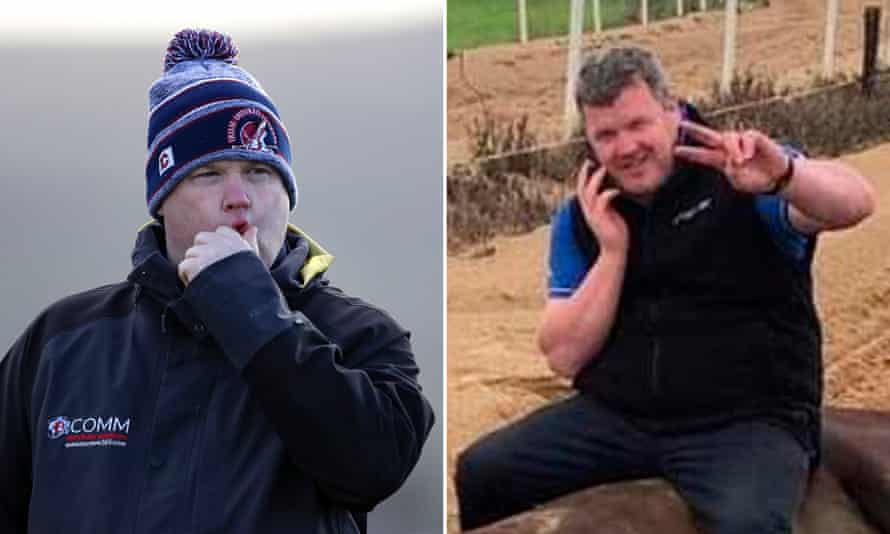 Gordon Elliott (right) and the photo of him (left) which has caused outrage. Photograph: PA/Twitter/Animal Welfare Watch

The interview with Elliott was published shortly after the BHA’s announcement that runners from his yard will not be allowed to race in Britain until the IHRB investigation into the case is concluded.

The BHA’s action, which is highly unusual while an investigation is ongoing in another jurisdiction, could prompt owners in Elliott’s yard with entries at the Cheltenham Festival in two weeks’ time to move their horses to other stables.

In a statement on Monday evening, the BHA said it will “use powers under its own rules to refuse to allow horses trained by Mr Elliott to race in Britain pending the outcome of the Irish investigation”.

Elliott is licensed in Ireland and is still able to run his horses there while the IHRB investigation continues. He had four winners from seven runners at Punchestown’s meeting on Monday.

“Mr Elliott has entered horses to race in Britain,” the BHA’s statement added, “from which point the British rules of racing apply to him.

“The decision to refuse to allow horses trained by Mr Elliott to run in Britain is therefore an interim decision which the BHA regards as proportionate in these circumstances.”

The BHA said in an earlier statement on Monday that it was “appalled” by the image, adding: “People who work in our industry believe their values, of caring for and respecting our horses, have been deeply undermined by this behaviour. On their behalf, and on behalf of all horse-lovers, we say unequivocally that British horseracing finds this totally unacceptable.”

Michael O’Leary, the chief executive of Ryanair and the most influential owner in Elliott’s stable, said earlier on Monday that he will continue to support the yard, although his statement preceded the BHA’s announcement of its ban on runners from the yard.

Cheveley Park Stud, which has four leading contenders for Cheltenham in the stable – Envoi Allen, Ballyadam, Quilixios and Sir Gerhard – said on Monday morning that while the Stud’s owners were “truly horrified and dismayed by the photograph doing the rounds on social media”, it would “await the official outcome of the investigation by the IHRB, which we trust will be swift, before making any further comment/decisions.”