MIKEL ARTETA wants to rebuild Arsenal's squad before this summer's Euros by signing two midfielders and a central defender, according to reports.

Defenders Pablo Mari and Cedric Soares were the only new Emirates arrivals in January.

The Daily Mail claim this quietness in the window has opened the door to a blockbuster summer.

And that will reportedly lead to the club landing a new box-to-box midfielder, a central defender and a creative central midfielder.

SunSport told you that Arteta could look to sell strike duo Alexandre Lacazette and Pierre-Emerick Aubameyang.

World Cup winner Mesut Ozil is also on the list of stars who could be given the axe as part of a major shake-up.

In their place could come Feyenoord's 19-year-old midfielder Orkun Kokcu, a Dutch-born Turkey Under-21 international.

Arsenal are said to be putting in the early groundwork with regards to deals.

They are aware that price tags can increase greatly if a relatively unknown player has a big international tournament.

There are fears at Arsenal that some of their targets could hit the big time at Euro 2020.

Consequently, clubs and agents could demand millions more in fees.

Arteta has been disappointed by the team’s lack of progress since he was appointed seven weeks ago.

Now he believes his under-performing squad needs major surgery after assessing the strengths and weaknesses of the players he inherited from Unai Emery.

With the team in serious danger of failing to qualify for Europe for the first time since 1996, Arteta accepts he might have to sell a number of the club’s highest-paid players to finance a summer spending spree.

Six senior players, including top earners Ozil and Aubameyang, are out of contract in less than 18 months’ time.

And head of football Raul Sanllehi has made it clear to Arteta that no one will be allowed to run down their deals then leave as a free agent next year.

Arteta is eager to keep captain Aubameyang and still hopes his top scorer will sign a contract extension.

But all negotiations have been put on hold until the end of the season, when the club will have a clearer understanding of their financial situation.

Aubameyang, who turns 31 in June, does not want to spend another season outside the Champions League and is aware of Barcelona’s interest.

Arteta acknowledges that a player who cost them £60million two years ago cannot be allowed to leave for nothing. 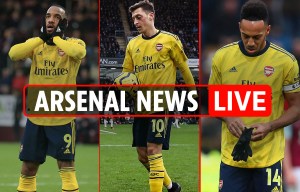 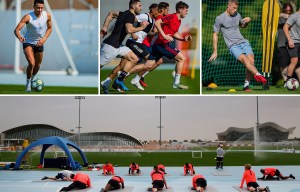 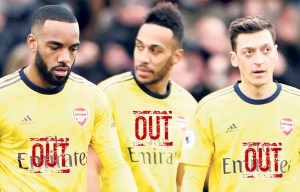 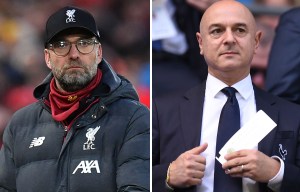 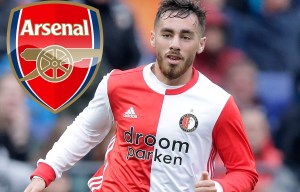 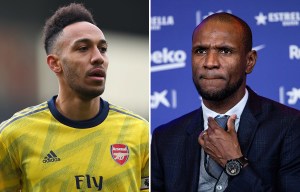 And it is a similar situation with Ozil, who has not scored all season and has managed just one assist in the league.

The 31-year-old has been substituted in six of his eight games for Arteta but insists he is happy at the Emirates and plans to see out his £350,000-a-week contract.

French international striker Lacazette has also struggled to impress Arteta and has failed to score a Premier League goal in two months.