MIKE TYSON burst onto the heavyweight scene in record time and became the baddest man on the planet.

But years before he was crowned the youngest heavyweight champion in history at 20-years-old, fighters were already getting a first hand taste of the young American's devastating power.

At just 16, under the tutelage of legendary trainer Cus D'Amato, boxers were witnessing or hearing whispers about the brute powerhouse from Catskill, New York who was knocking out fully grown men.

Tyson famously explained the reason for his aggressive no holds barred sparring, as he barked, "I train how I fight."

Here SunSport reveals his most famous spars which included future champions, opponents and being floored in public.

At 16 Tyson sparred 1936 Olympian Clark, with trainer D'Amato wanting to see how his amateur heavyweight would fare against a seasoned fighter.

It was safe to say did more than pass.

A teen Tyson backed up and bullied a much taller Clark showing early signs of his classic 'peekaboo' style of moving his head and rapidly changing angles as he threw his punches.

At one point Clark desperately tied Tyson up and shouted, "Strong boy, Cus. Strong boy".

The spar was being recorded but after just one round Clark said, "Cut it off" as he demanded all filming ended as he struggled to keep Tyson at bay with his jab.

Those watching around the ring were left gobsmacked at the sheer force of Iron Mike - who regularly chose NOT to wear a headguard in sparring to improve his vision.

A 17-year-old Tyson travelled to Williams gym for a sparring session that six-years later would be the talking point before a world title fight.

Still an amateur, the heavy-hitter shared the ring with then 23-year-old pro Williams, with differing memories shared on how the went.

In footage leaked, Williams is able to keep Tyson off him with a solid jab and good counters despite the constant front foot pressure throughout.

Speaking on the spar, Williams recalled: "He jumped on me that particular day, gave me a bloody nose and everything, I was shook up. I was saying to myself 'Oh my god, how am I going to let this amateur come in here and do that to me.

"I was very angry that night. I went home and thought about it and the very next day I came in the gym with a different attitude towards him and busted him up"

But Tyson said: "He sparred me when I was 14 or 15-year's-old and he couldn't kill me then. Now I'm five times or ten times the fighter I am now."

The differing accounts mattered little when they fought in the pros in 1989. Then champion Tyson knocked Williams out in just over a minute and a half.

Another of Tyson's future opponents he sparred was Brit star Lewis. After winning the World Junior Championships, Lennox was informed that his true rival for the crown hadn't made it to the ring.

Given Tyson's preference not to fly out to the Dominican Republic for the competition, Lewis was encouraged to meet him, as he told Joe Rogan: "I won the World Junior Championships in Santo Domingo, Dominican Republic and I remember the American team were saying, 'Oh well you never fought the best'.

"First day in the gym, bell went, he came across and he was trying to kill me. I did my Muhammad Ali thing obviously and stayed away from his power, but the first day was really hectic.

"The second day was a little hectic but got better as it went along, and then the last day I actually got the better of him.

"I remember Cus D'Amato saying, 'Mike! You're gonna meet him some day, don't you do that!'And that always echoed on my mind, 'Will we ever fight?'. Because Cus D'Amato said we were going to fight, and it did happen."

D'Amato, not for the first time, was right as Lewis would go onto KO an out of shape and form Tyson in 2002, with many left frustrated the fight did not take place in the late 90s.

Canadian Lakusta was a tough as nails heavyweight journeyman who retired with a 23-23-1 record, fighting the likes of Larry Holmes, George Foreman and Frank Bruno before leaving the sport in 1994.

But in 1988 he made a name for himself for being Tyson's sparring partner before he defended his belt against Tony Tubbs.

Tyson hammered Lakusta with murderous right hands and even had to halt the spar for a moment after damaging his training partner's ribs.

But in front of the public he carried on and even began to back Tyson up towards the end.

American McCall was one of Tyson's chief sparring partners after he won the title in the late 80s.

Tyson used McCall before beating Tyrell Biggs in 1987 and then Larry Holmes a year later.

McCall was 3in taller than Tyson and did a good job keeping him at distance and at times even matched him for speed in the centre of the ring.

During a 1988 spar the pair were exchanging words as the session got heated before trainer Rooney said, "Shut up a fight, both of you".

McCall claimed he was the only man Tyson could never KO in sparring, as he told Laugh At First Site: "He was beating up on other sparring partners. I said, 'Well I must be doing something right because he isn’t busting my head.’ I didn’t want to get my head busted.

“I saw a lot of people get their heads busted and scream and run out of there without even getting paid.”

In 1994 McCall became the first man to beat future champion Lewis, but was knocked out in their rematch three years later. 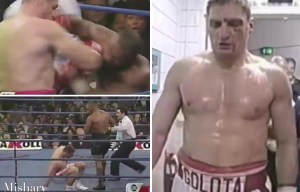 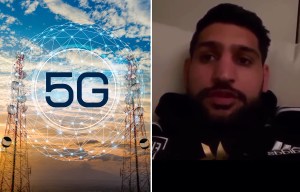 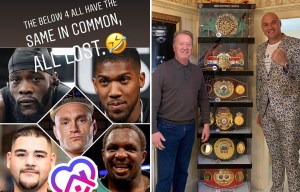 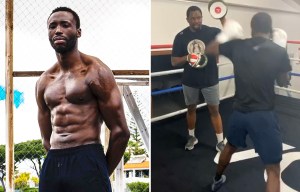 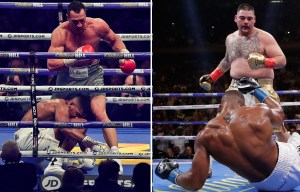 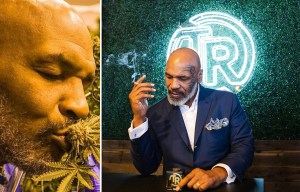 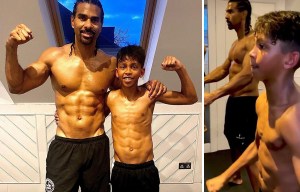 MAKE HAYE WHILE THE SON SHINES 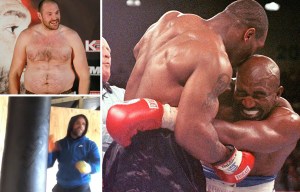 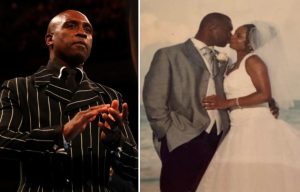 Tyson was beaten for the first time in 1990, as James 'Buster' Douglas scored a shock 10th round KO in Japan which today still stands as the greatest upset in boxing history.

But the writing was on the wall for the undisciplined and distracted champion.

In an opening sparring session just days before the Tokyo fight, Tyson was floored by Page, who caught the American coming in with a perfectly timed hook.

It was the only time he was ever dropped in a recorded spar, with onlookers left in shock as the heavyweight champion was left on the seat of his pants.

Before the Douglas fight R&B singer Bobby Brown recalled partying with the boxer until 3.00am while Tyson - whose marriage to Robin Givens was falling apart - admitted that sex was his main form of training before his unbeaten streak and cloak of invisibility was over.

He said: "Besides having sex with the maids, I was seeing this young Japanese girl who I had had sex with the last time I was in Japan.

"Robin would go out shopping and I would go downstairs to the back of the hotel where this young girl had a room… so that was my training for Douglas."

Shevchenko will extend his contract with the Ukrainian national team for 2.5 years
Flick about Havertz in Bayern: Few people will not want to see him in their team
Liverpool were evaluated by Werner above Sancho and Caverta. Klopp personally informed the player about the disruption of the transfer (the Athletic)
This is ridiculous. Sancho reacted to the haircut penalty and then deleted the tweet
Barnes on Werner at Chelsea: if Klopp really wanted him, Timo would have chosen Liverpool
Klopp on Liverpool players taking a knee: I was proud of. This is an important message
Bale's agent: Gareth speaks Spanish. TV experts make themselves look like idiots
Source https://www.thesun.co.uk/sport/boxing/11354709/mike-tyson-sparring-dropped-public-loss/

QIPCO 2000 Guineas: Hector Crouch living the dream as he gets leg up on Saeed bin Suroor’s Military March

Most Newcastle primary schools begin to reopen from Monday

What is chlorinated chicken and why are people concerned?

Reddit co-founder resigns, urges board seat be filled by black candidate and donates $1M to Kaepernick