EU countries can now more easily deport asylum seekers arriving at their door as well as hold onto migrants for 16 weeks, with Poland, Lithuania and Latvia able to hold people for extended periods of time in processing centres on the border with Belarus. The current rules say the maximum time for detention is a month, with three to six days allowed to register a claim for asylum in member states - rising to 10 in exceptional circumstances.

The EU said these measures will allow the eastern European countries to manage the crisis caused by unrest against dictator Alexander Lukashenko in Belarus.

The EU said the emergency measures would allow Poland, Lithuania and Latvia “to set up swift and orderly processes to manage the situation, in full respect of fundamental rights and international obligations”.

The rule change, which the EU stated will be in effect for six months then subject to review, will mean that eastern bloc countries bordering Belarus “will be able to apply simplified and quicker national procedures including for the return of people,” opening the door for easier deportation.

The EU home affairs commissioner, Ylva Johansson, said: “We are giving flexibility and support to member states to manage this emergency situation, without compromising on human rights.” 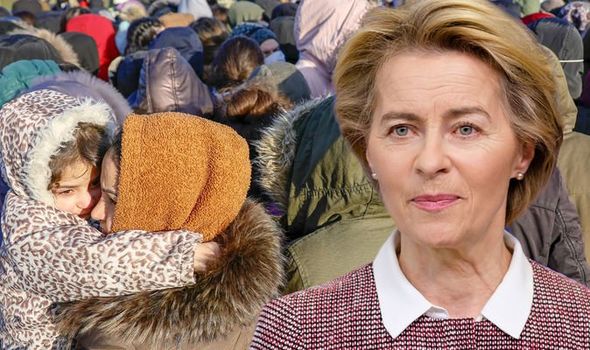 The current rules say the maximum time for detention is a month (Image: Getty) 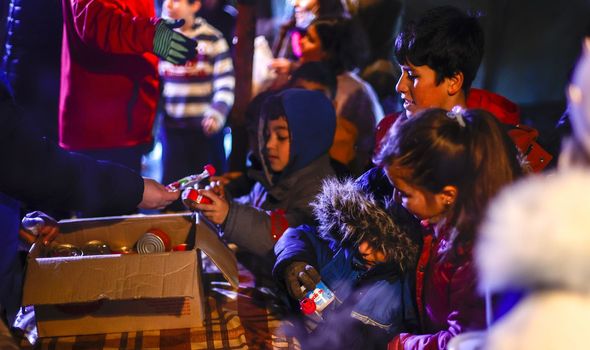 The EU said these measures will allow the eastern European countries to manage the crisis (Image: Getty)

Ms Johansson added the measures were “time limited and targeted” for a situation that “remains delicate”.

The EU justified its rule change by accusing the Belarusian regime of “a hybrid attack on the EU, especially Lithuania, Poland and Latvia, which have experienced an insidious new threat in the form of the instrumentalisation of desperate people”.

Although diplomatic in speaking of “attempts to undermine the Union” in the EU press releases announcing the measures, Vice-President for Promoting our European Way of Life, Margaritis Schinas, was more emphatic in separate comments on the measures.

The Telegraph reported Mr Schinas commented: “If a migrant doesn’t want to apply for asylum in one of those three countries, they must apply in Belarus. 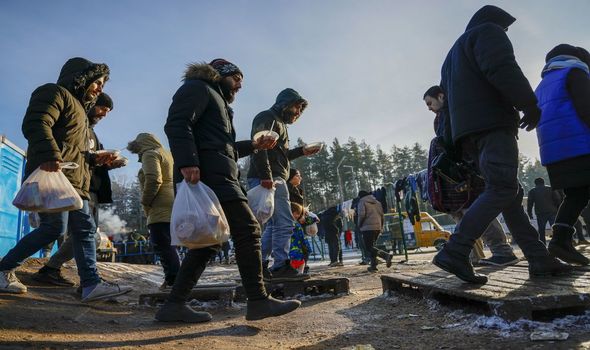 The EU justified its rule change by accusing the Belarusian regime of 'a hybrid attack on the EU' (Image: Getty) 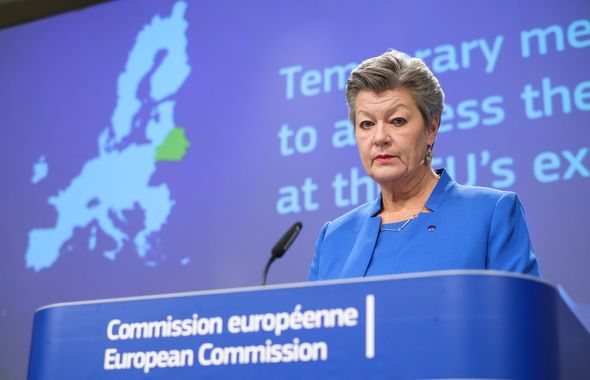 “If he doesn’t apply in Belarus either, he should go home.

“Frankly that is how we see it.”

The EU has previously accused Lukashenko and his regime of pulling needy people from areas like the Middle East to Belarus, just to drop them at the EU’s border in an effort to unbalance the bloc.

In a statement issued in mid-November, western countries denounced “the orchestrated instrumentalisation of human beings whose lives and wellbeing have been put in danger for political purposes by Belarus”. 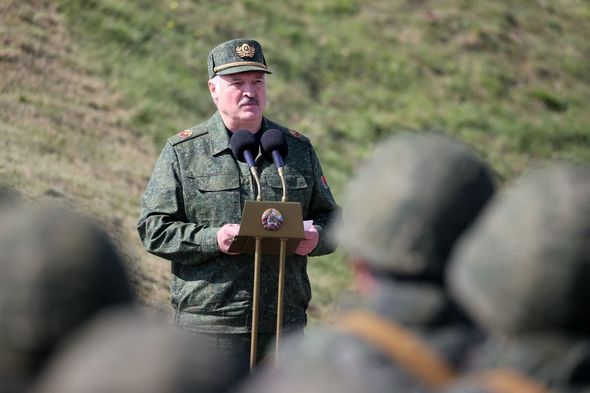 The EU has previously accused Lukashenko and his regime of a 'hybrid attack' (Image: Getty)

The joint statement added Belarus had “the objective of destabilising neighbouring countries and the European Union’s external border and diverting attention away from its own increasing human rights violations”.

The European Commission estimated at least 18,000 migrants travelled into the EU from the Belarusian border.

Human rights groups have slammed the emergency measures as using desperate people as a weapon of political warfare.

Eve Geddie, Amnesty International’s European director, said: “If the EU can allow a minority of member states to throw out the rule book due to the presence of a few thousand people at its border, it throws out any authority it has on human rights and the rule of law.”

Head of the European Trade Union Confederation, Ludovic Voet, added: “Suspending Europe’s asylum protections would not only be morally wrong but also represent a total capitulation to the blackmail tactics being used by Belarus and its allies.

“The EU’s militaristic approach to the humanitarian crisis on its border has played into the hands of Lukashenko’s regime and rewriting fundamental rights under pressure would only serve to further encourage hostile actors to weaponise the lives of vulnerable people to exert pressure on Europe.”

“Supporting the detention of migrants at EU borders puts politics over people’s lives.”