Middlesbrough MP: One train a day ‘not a proper service’ for town

Andy McDonald, the Middlesbrough MP and former Shadow Transport Secretary, welcomes the start of a daily train service from the Boro to the capital but says it is not enough to get the region’s economy on track.

ON Monday, December 13, before the sun has risen, the inaugural direct Azuma train to London will glide out of Middlesbrough station.

While it may be a stretch to say it represents a new dawn, it is undoubtedly a hugely important milestone in our railway journey and represents the successful culmination of years of campaigning.

It’s the start, and only a start, towards better connections and it’s been a long time coming.

It has been exactly nine years since I was elected as MP for my hometown and from the very beginning, I have campaigned for improved transport services in the region as I have long since been convinced that there are huge economic benefits to come to Middlesbrough and the Tees Valley from having better rail links and better bus services.

That’s why I have been so persistent on securing the direct rail service to London.

For now, there will only be one train a day between Middlesbrough and London. That’s nowhere near good enough and it’s not what we were promised.

The plan has always been for a frequent service but we do have the commitments for a daily service of seven trains to London and six trains back to Middlesbrough, offering a decent choice for both business and leisure travellers. It’s a matter of making sure that this doesn’t become another broken promise.

But with this singular daily service we are now told there will be little chance of that increasing until 2023 – that’s not a proper timetable and Middlesbrough deserves better.

I have repeatedly stressed the economic benefits that will come to Middlesbrough through improved rail connectivity and together with former mayor Dave Budd, some wonderful officers of Middlesbrough Council, I have repeatedly made the case at innumerable meetings in Middlesbrough, York and London with Network Rail, Virgin East Coast (as was), LNER, Northern and TransPennine Express, Tees Valley Combined Authority officers and of course the Department for Transport.

I have also taken every opportunity in Parliament and beyond to keep the profile of the direct service as high as possible.

But I have to stress that one train a day is not a proper service and the focus now has to be on securing that more frequent service as soon as possible.

Sadly, the expansion of Platform 2 at Middlesbrough station, welcome as it is, is not enough to allow for a full service.

When I met with senior representatives at LNER they told me that further improvements are needed – including new third platform – before a daily seven train service can be implemented. Those works fall under the remit of Network Rail.

It is a source of great frustration that our fragmented railway is characterised by the left hand not knowing what the right hand is doing and that is why, amongst other reasons, as Shadow Secretary of State for Transport, I published a White Paper early last year entitled “GB Rail – a full integrated and devolved railway in public ownership”. That would have united track and train and put power and control in the hands of the nations and regions of Great Britain.

What we have seen in recent weeks with the outrageous betrayal contained in the Integrated Rail Plan, is not only the Tory government breaking yet more of its promises to the North, but also “taking back control” to themselves in Westminster and Whitehall and away from Transport for the North. So much for “levelling up” and so much for devolution.

The necessary and outstanding works at Middlesbrough should have been completed years ago but Network Rail are yet to even finalise their scheme of works let alone get the sign off for the money from the Treasury. 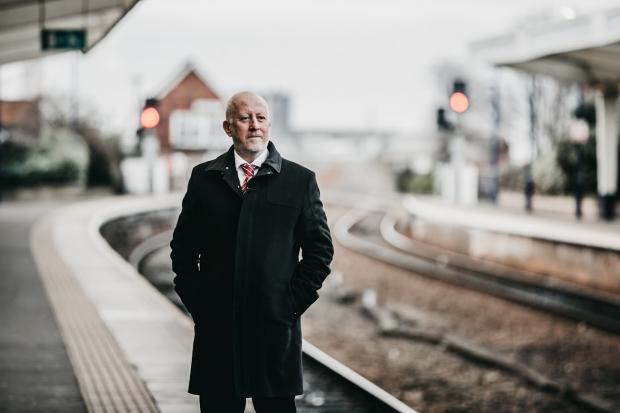 The IRP announcement cancelling the eastern leg of HS2 and watering down Northern Powerhouse Rail was further proof, if it were needed, that the North continues to be undervalued and under resourced.

HS2 was designed to lift the strain off our entire rail network. To deliver the full benefits for passengers and communities across all of the North of England and the Midlands, all of it needs to be built not just part.

A fully delivered HS2 would have freed up capacity across the Northern and Midlands rail networks and would enable better local and regional services and create the space for more freight on rail and that would have massively assisted us here in the Tees Valley.

And if we are really going to make the critical shift to address the climate crisis, we need that modal shift from road and air to decarbonised rail. That means the expansion of rail electrification right across places such as the Tees Valley.

That starts with what I have long since argued for namely the electrification of the line from Northallerton to Middlesbrough. Indeed, I made repeated representations to the National Electrification Taskforce and it duly reported in 2013 to the then Tory Transport Secretary Patrick McLoughlin highlighting 12 northern rail routes which should be electrified by 2024.

Northallerton to Middlesbrough was one of the 12. But since then, the Government has gone completely silent on the schemes.

That’s entirely consistent with the 11 years of empty promises we’ve had from the Tories in government.

I have been, and will continue to engage with the Department for Transport, Network Rail, the Train Operators and all other stakeholders to ensure we have a truly fit for purpose rail service across the Tees Valley.

So, when I get off that first Azuma at King’s Cross, I’ll be going straight Parliament where my first meeting of the day will be the All Party Parliamentary Group for Transport across the North, where I will continue to make the case for better transport services for Middlesbrough.

Netflix admits rival streaming services ‘may be affecting our growth’

Was there a bridge collapse in Las Vegas?

Man snaps up 'Liar.co.uk' site so he can redirect to Boris Johnson's Wikipedia page

UK Weather: Brits to shiver as mercury will dip to bone-chilling -7C overnight – but spring could arrive early this year

Boris Johnson blew £900,000 to find out bridge from Scotland to Northern Ireland is too expensive to build