It started innocuously enough in late October, a smash-and-grab win at home to a Monaco side who were in the thick of a challenging Europa League group and frequently misfiring. Monaco dominated possession without creating many clear chances and Brest executed a pair of near-perfect counterattacks to win 2-0, their first victory of the season. Incredibly, four more wins followed for Michel Der Zakarian’s side before they made the trip south to face second-place Marseille this weekend.

Granted, the opposition has not always been the toughest – Lorient, Bordeaux and St Étienne have been battling relegation this season – but their 4-0 win against Lens was a real statement of intent after the northern side’s barnstorming start to the season. For a team who had foundered last season after an impressive campaign in the Covid-curtailed 2019-20 season, barely avoiding relegation, their winning run shows that any worries about Der Zakarian’s methods failing to translate to Brest may have been premature.

He was in charge of Montpellier last season and they delivered some thrilling performances before falling short of a European finish. At Montpellier he had the fantastic striker partnership of Andy Delort and Gaëtan Laborde, and the twin creative hubs of Florent Mollet and Téji Savanier. Earlier this season, as Brest struggled, it seemed that his methods might not be suited to Brest’s less heralded squad. Their turnaround shows he knows what he is doing. 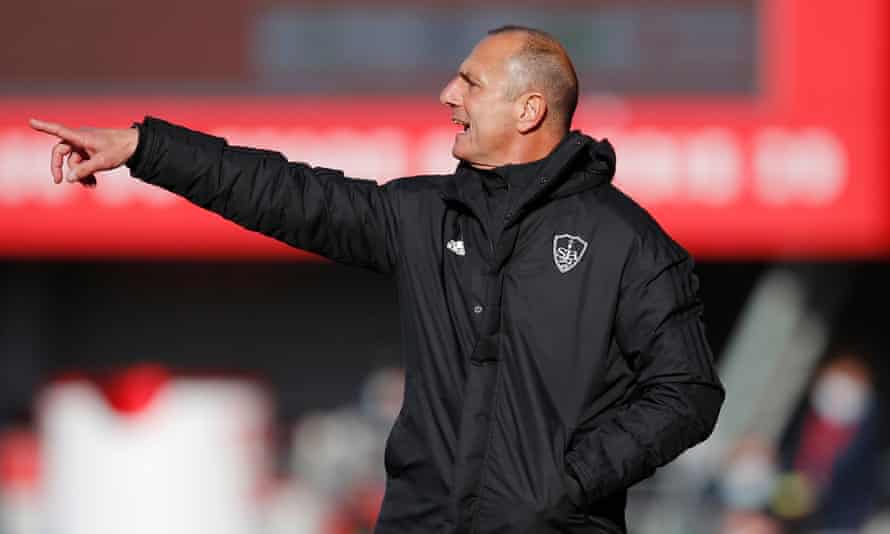 Der Zakarian has fostered something of a chameleonic reputation as a manager. In first job as a head coach, he won promotion for Nantes, taking them back to Ligue 1, but was sacked after just three matches the following season, the victim of the notoriously trigger-happy owner Waldemar Kita. Back in the second tier at Clermont, he led the club to three consecutive top-half finishes while working with a paltry wage bill. Despite a lack of star players, he espoused a relatively attack-minded style.

He returned to Nantes in 2012 after they had been relegated to Ligue 2. He won promotion at the first time of asking and remained in charge for a further three seasons, comfortably avoiding the drop by playing a dogged 4-4-2. Characterised by the leather-lunged full-backs Olivier Veigneau and Issa Cissokho, and the uncompromising defensive play of Oswaldo Vizcarrondo and Papy Djilobodji, his team finished 14th in 2014-15 despite scoring just 29 goals, the fewest in the division. It was not pretty, but it was effective.

After growing tired of Kita’s parsimony, he returned to Ligue 2 to take charge of Reims in 2016. Having failed to lead them back to the top flight (admittedly, he was hamstrung by the departure of several key players), he seemed an odd choice to take over at Montpellier the following year. But he managed to adapt once again, playing a high-octane brand of football with some success. He lined his side up in a 3-5-2 formation despite having a creaking backline with an average age of 36 years old in Pedro Mendes, Hilton and Daniel Congré.

When he failed to take the club into Europe it looked as if his methods might have reached a limit. So it seemed a strange gambit for Brest to choose him to replace Olivier Dall’Oglio, who has gone the other way to Montpellier and led them back into the top half of the table this season after an uneven start.

Brest are a small club by any measure – their only trophy is the Ligue 2 title they won in 1980-81 – and they have been forced to sell some of their better players since returning to Ligue 1. Left-back Romain Perraud was their headline departure this summer but, rather than replace the marauding Frenchman with a similar type of player, Der Zakarian has opted to convert centre-back Jean-Kévin Duverne to a left-back and drop summer signing Jere Uronen in his 4-4-1-1. He has also dropped Irvin Cardona in this winning run, despite the former Monaco man having been been the team’s second-leading scorer, bringing in Jérémy Le Douaron, who the club signed from an amateur club last year.

This shift – along with moving Romain Faivre to the right flank to get the best out of Franck Honorat and allow both players ample room to cut inside on to their favoured feet – has worked a charm. Le Douaron is good in the air, much like Steve Mounié (no team in France wins more headers than Brest), but he is quicker, which allows him to get to second balls, either to score himself or to set up his teammates (he has three goals and two assists in this run). Mounié plays the targetman role perfectly and, while his scoring rate is down slightly from last year, his consistent aerial threat – no one wins more headers in Europe – gives Brest more menace. It took Der Zakarian some time to find his best team and system, but he has made Brest consistently admirable, if not necessarily aesthetically ideal.

Against Marseille on Saturday, they weathered an early storm from the hosts, playing in front of their fans in the league for the first time since they were sanctioned for crowd trouble in Le Classique. Better finishing from Konrad de la Fuente might have given Marseille an early lead before Gerson opened the scoring for the hosts. But Brest never faltered, battling back to score twice and win the game.

Brest are now 10th in the table, just three points off fourth place. It would be folly to imply that Europe beckons but, as Der Zakarian suggested after the match in Marseille, his team thrives on defying expectations. “We are a team that only defends? But we score goals in every match,” said the manager.

They have scored in all of their matches this season and those goals have been turned into points as their defence has coalesced in front of goalkeeper Bizot. Set pieces have also been important; they have scored 10 goals from dead balls this season. Brest are a fine advertisement for the chameleonic tactics of Der Zakarian and also for what can be achieved when a team works towards a common goal and plays to its strengths. 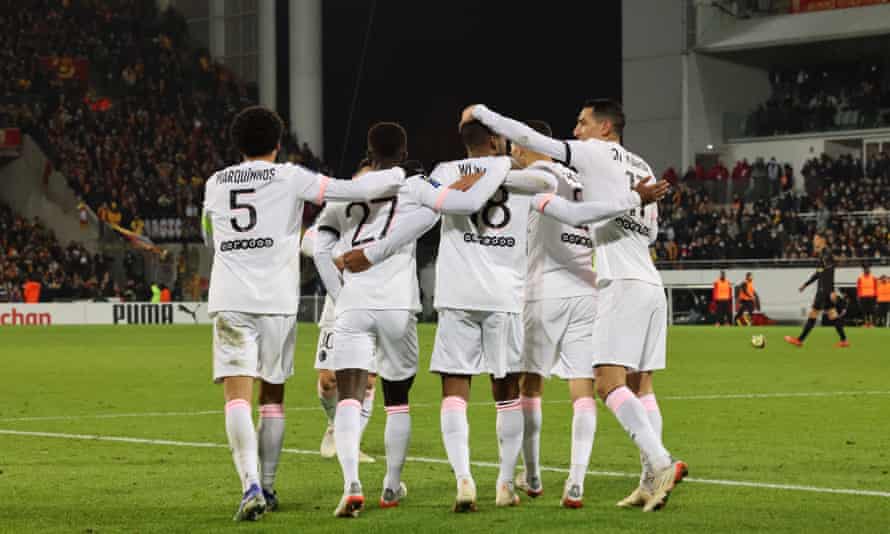 PSG escaped from Lens with a point. Photograph: Laurent Sanson/LiveMedia/REX/Shutterstock

Lens played sublimely well against PSG on Saturday evening, looking to beat the league leaders in this fixture for the second season running. But while last year’s victory against a Covid-hit PSG team was somewhat fortunate, this match, in which Lens deservedly led 1-0 heading into stoppage time, was anything but. Lens pressed, harried and put their moneyed opponents under significant pressure throughout, offering a fine performance even if the stops of goalkeeper Jean-Louis Leca proved decisive at times. A late goal from Georginio Wijnaldum rescued a point for PSG. The result was harsh on Franck Haise’s side, but their aptitude for playing well in the biggest matches this season remains undiminished, to the massive credit to his management as a whole.

Midweek rounds have a knack of throwing up surprise results and so it was for Rennes, whose lengthy unbeaten run was ended by Lille on Wednesday. A match at bottom side Saint-Étienne this weekend looked to be just the tonic, but no one would have predicted that Bruno Génésio’s side would run out 5-0 winners, with Lovro Majer back to his best by providing each of the assists for a Martin Terrier hat-trick. Sterner tests are looming, with an improving Monaco and Nice to play before the new year, but this was as firm a rebuttal to Wednesday’s disappointment as Rennes could have hoped.

While Brest pulled off the weekend’s biggest upset, Strasbourg’s 3-0 win in Nice was not far behind. Conceding three goals for the first time this season, Christophe Galtier’s side looked far from the Champions League contenders they had seemed earlier this season. They failed to create many meaningful chances against opponents who have not been at the races going forward and also somewhat leaky at the back. Things do not get any easier for Nice, with Lens, Rennes and Brest all to come. Nice were hoping to take advantage of their rivals’ European commitments but, with only one win in their last five league matches, they badly need a victory at the weekend to reinsert themselves in the discussion for the top three before the winter break.

All Bradford district sites with zero or one food hygiene rating

Katie Price’s ‘luxury lifestyle being investigated after she fails to repay £3.2million debt’

6 charged with bid to smuggle arsenal to Mexican drug cartel

I was lucky not to see the dark side of Hugh Hefner’s Playboy Mansion, says model Carla Howe

Google accused of ‘deceptive’ location tracking in fresh round of lawsuits

‘No evidence of hacking’: WeChat hits back at interference claims about Scott Morrison’s account

EXPLAINER: Who are 3 officers on trial in Floyd's killing?

Cardi B wins over $1.25M in lawsuit against YouTuber Tasha K after she made ‘malicious & false claims’ about rapper

Car that transforms into plane in just minutes cleared to fly

Man, 22, died rescuing suicidal pal from sea despite not being able to swim

Message in bottle travels from Maryland to Ireland, bringing comfort to grieving boy