The Met Office has warned Britons to experience intense weather on Thursday evening through to Friday morning. The yellow weather warning advises of intense fog and covers much of the country. But what does the Met Office warning say?

The Met Office today issued a severe yellow weather warning for fog on Thursday into Friday.

The warning advises of fog patches may lead to some travel disruption.

The warning reads: "Fog and freezing fog patches are expected to develop quite widely on Thursday night, with some of these becoming dense in places with very poor visibility.

"This is most likely to affect parts of central England and east Wales, but other areas are also at risk.

"Fog is likely to be slow to clear during Friday and may last through the day in some places which may lead to some travel disruption." 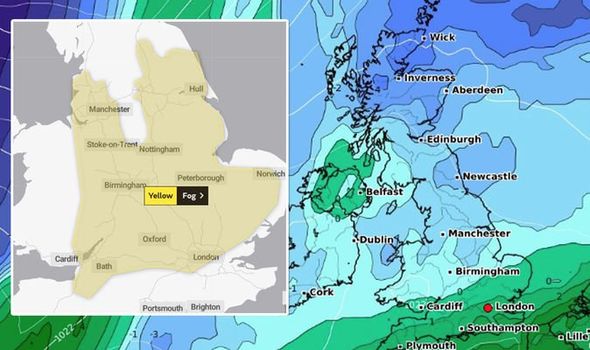 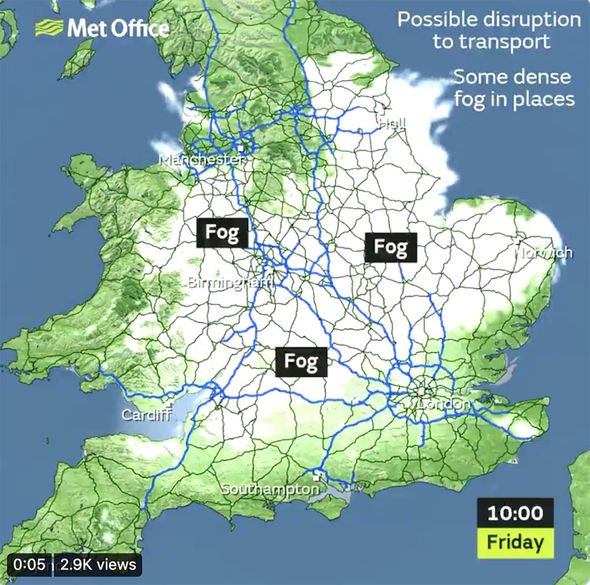 The Met Office warning is in effect from Thursday at 8pm until Friday at midday.

The weather forecaster advises that the fog patches may lead to travel disruption.

Britons are likely to experience slower journey times with delays to bus and train services possible.

In addition, there is a chance of delays or cancellations to flights. 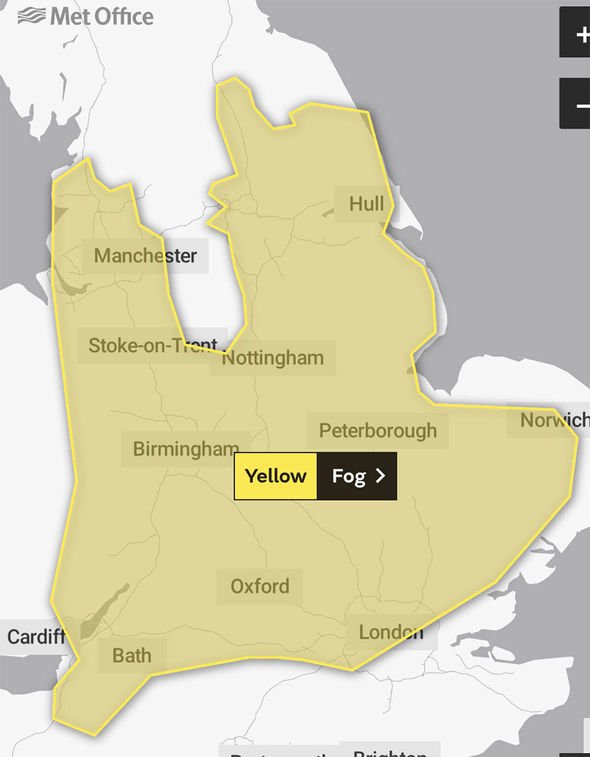 The affected regions include: 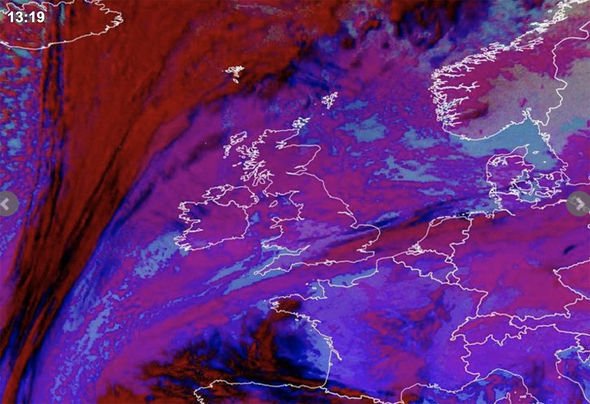 Met Office weather warning: The warning is in effect from 8pm until 12pm tomorrow (Image: METCHECK)

In the UK, freezing fog tends to happen when temperatures are around freezing and there are clear skies and calm conditions.

Freezing fog can prove hazardous in some situations.

When ‘regular’ fog forms during temperatures below freezing, it creates the phenomenon known as freezing fog.

The tiny water droplets in the air stay as a liquid - just at bone chilling temperatures - even though they are below freezing temperature.

The Met Office says: “This occurs because liquid needs a surface to freeze upon. When droplets from freezing fog freeze onto surfaces, a white deposit of feathery ice crystals is formed.

“This is referred to as rime; rime is a characteristic of freezing fog and is often seen on vertical surfaces exposed to the wind." 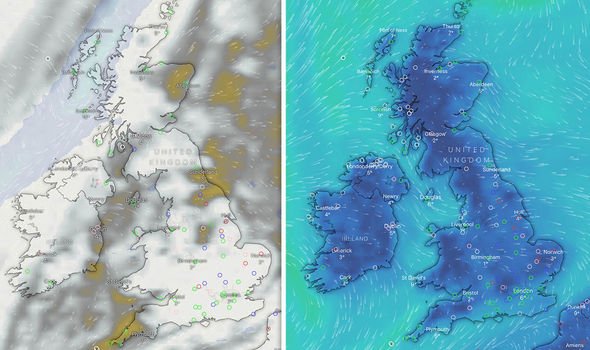 The Met Office tweet about the fog patches shortly before issuing the alerts.

"Some of this fog will be freezing and may struggle to clear on Friday Fog."

The weather forecast for the rest of this week advises of cold and murky conditions.

The weather forecast for Friday reads: "Fog patches will be slow to clear, perhaps persisting in places, and feeling cold.

"Some rain for northwest Scotland, whilst also perhaps across southern England and Wales later."

On Saturday through to Monday, the forecast reads: "Misty and murky for many areas Saturday; fog slow to clear for northern England.

Klopp on Alisson: My God, what a goalkeeper! Needed him at 2 points Manchester United
Eldor Shomurodov: Torres and Drogba are my idols. Would like their autographs
Alaba is almost real. It seems that instead of Ramos: Sergio will not be able to replace directly, but will affect the team through a change in style
Alaba's father on Real Madrid: The contract has not been signed, the decision has not yet been made. There are other clubs
Alaba has not yet agreed with Real Madrid. The player is in talks with Barca, City, Manchester United and PSG
I'm the girl who lost her mother. The Athletic forward received a touching letter after the winning goal in the Super Bowl
Atletico want to extend Simeone's contract until 2024. The coach is ready to reduce the salary due to the crisis
Source https://www.express.co.uk/news/weather/1364980/Met-Office-weather-warnings-freezing-fog-england-latest-forecast-maps?utm_source=feedburner&utm_medium=feed&utm_campaign=Feed%3A+daily-express-news-showbiz+%28Express+%3A%3A+News+%2F+Showbiz+Feed%29