The Met Office warned "snow showers and icy stretches likely to bring some travel disruption Wednesday night into Thursday". Two yellow weather warnings have been issued, beginning on 6pm on Wednesday and running to midday on Thursday,

The warning read: “Frequent showers will increasingly turn to snow Wednesday night and persist into Thursday morning though these likely to fall as sleet and hail at times, mainly around coasts.

“Northwest Scotland looks most exposed to these showers with 2 cm of snow accumulating by Thursday morning in places even to low levels.

“Larger accumulations are expected at higher elevations with 2-5 cm above 200 m and up to 10 cm over some of the highest routes.

“Whilst the Southern Uplands is likely to see some snow over higher ground the likelihood is that only very small accumulations are expected here below 200 m.” 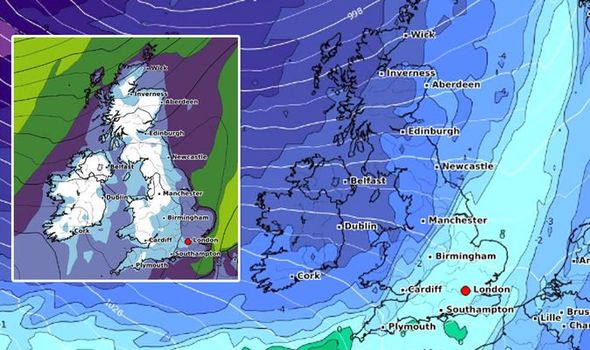 The Met Office also warned roads and railways likely to be affected with longer journey times, with the potential for icy patches to form on untreated roads.

The forecaster also said there could be some injuries due to slips and falls on icy surfaces so warned to be careful when out and about this week.

Much of Scotland is affected by the weather warning, with cold showers turning "increasingly wintry" from Wednesday.

Scroll down to find the full list of regions and areas affected by the warning.

From Thursday, the Met Office says "colder, unsettled conditions are expected to spread to the entire UK with frequent showers, areas of heavy rain and some hill snow".

Steve Ramsdale, Chief Meteorologist at the Met Office, said: “Although we’re going to see a few days with colder conditions, we shouldn’t be surprised that the start of winter brings a brief spell of wintry weather.

"Some parts of the UK, especially northern hills, may see snow, but for many this will only be short lived.

"We’ll be monitoring the forecast and we will issue warnings accordingly.”

Eriksen pro goal for Milan: It was the perfect free kick for me. I am very happy
Conte on 2-1 with Milan: Before the winning goal, the result was unfair. Their goalkeeper is the best player of the match
Mikel Arteta: Arsenal did everything right, but they lost. Wins give confidence
Nicolo Barella: We proved that we are stronger than Milan
Go do your voodoo shit, you little ass. Ibrahimovic-Lukaku during the Cup match
Pioli on the defeat by Inter: The only difference was the relegation. There could be any result in equal teams
UEFA has no plans to abandon the Euro in 12 cities. Other options are undesirable
Source https://www.express.co.uk/news/weather/1366833/Met-Office-warning-snow-radar-alert-uk-weather-latest-maps?utm_source=feedburner&utm_medium=feed&utm_campaign=Feed%3A+daily-express-news-showbiz+%28Express+%3A%3A+News+%2F+Showbiz+Feed%29