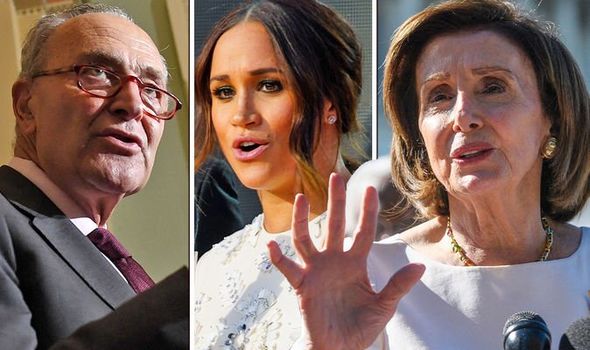 Traditionally, the Royal Family remains strictly neutral when it comes to political matters. But since stepping away from the Firm, Meghan and Harry have stepped into the realm of politics and urged Americans to vote in the US President elections last November.

And now, the Duchess of Sussex has made a huge political move with a letter to the US Congress.

In her letter, Meghan called on Speaker Nancy Pelosi and Leader Charles Schumer for paid leave for mothers.

She wrote: "Over the past 20 months, the pandemic has exposed long-existing fault lines in our communities.

"At an alarming rate, millions of women dropped out of the workforce, staying home with their kids as schools and daycares were closed, and looking after loved ones full-time.

"The working mom or parent is facing the conflict of being present or being paid.

"The sacrifice of either comes at a great cost."

The Duchess of Sussex goes on to say how she grew up on the "$4.99 salad bar at Sizzler" but remembered "how hard my parents worked" to afford it.

Meghan continued: "People in our country work incredibly hard, and yet the ask is soft: for a level playing field to achieve their version of a common dream—what is fair, and equal, and right.

"Many of our economic systems are past their expiration date, and as you well know, too many Americans are forced to shortchange themselves when it comes to what matters to them."

Meghan - who welcomed a daughter Lilibet Diana in June - acknowledged how her and Harry were not "confronted with the harsh reality" that other parents suffer.

She said: "No family should be faced with these decisions.

"No family should have to choose between earning a living and having the freedom to take care of their child (or a loved one, or themselves, as we would see with a comprehensive paid leave plan)."

In her plea for paid leave, Meghan said it should be a "national right" like many other countries.

She concluded: "Paid leave should be a national right, rather than a patchwork option limited to those whose employers have policies in place, or those who live in one of the few states where a leave program exists.

"If we’re going to create a new era of family first policies, let’s make sure that includes a strong paid leave program for every American that’s guaranteed, accessible, and encouraged without stigma or penalty.

"But this isn’t about Right or Left, it’s about right or wrong.

"This is about putting families above politics.

"And for a refreshing change, it’s something we all seem to agree on.

"At a point when everything feels so divisive, let this be a shared goal that unites us."

This comes just months after Harry and Meghan were revealed to be taking five months leave following the birth of their daughter.

Royal expert Marlene Koenig compared this to American mothers and insisted it is "not the norm".

"They offer up to 20 weeks parental leave at Archewell - it'll be several months off work for the pair of them.

Brits must wear face masks at hairdressers and nail salons from tomorrow or face fine of up to £6,400

When is McDonald and Dodds season 3 released on ITV?

Musician, 24, in court charged with murder of Bobbi-Anne McLeod, 18, who vanished from bus stop

Glossier The Make-up Set now 35% off for Cyber Monday

I let my six-month-old baby be nocturnal, I won’t force him to sleep no matter what trolls say

9 Best whisky advent calendars you can buy in 2021

How to unlock SECRET iPhone buttons to access hidden features

How Ralf Rangnick could line up Manchester United XI this season