Some aggressive bampot bursts from the crowd and makes a beeline for Ronaldo, nearly getting hold of his shirt before stewards drag him off to the cooler. Ronaldo, unperturbed, walks away from the scene smiling. A celebratory atmosphere in Old Trafford, as the Atalanta players trudge off sadly, the home heroes walking on air. To think United were booed off by a section of the crowd at half time! They were bottom of Group F at one point this evening ... but now they’re top with six points. Big game in Italy coming up on Matchday Four. Big game against Liverpool coming up on Sunday, too; they’ll go into that with their tails most firmly up. 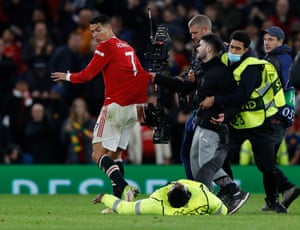 Why can’t this bampot just bring a homemade sign asking Ronaldo for his shirt like everyone else? Photograph: Phil Noble/Reuters
Source https://www.theguardian.com/football/live/2021/oct/20/manchester-united-v-atalanta-champions-league-live-score-updates