Bournemouth boss Eddie Howe insisted there have been "no issues" with forward Josh King after his proposed Manchester United deadline day transfer fell through.

Bournemouth rejected United's advances for King as Ole Gunnar Solskjaer sought to boost his striking options on the final day of the transfer window, eventually completing a loan move for Odion Ighalo from Shanghai Shenua.

As it currently stands, no [issues]," he said. "He has been in a really good frame of mind," Howe said.

“He is desperate to come back from injury and show everybody how good he is. He is very keen to play for the club, for the shirt, there is no issues with him at all.

“It was a difficult few days for him. I’m not going to deny that, but I think he is in a good place now to return and fight for us."

Look back over the latest Manchester United news all day.

United reportedly scouted Verona’s 19-year-old defender Marash Kumbulla at the weekend - and were so impressed they are ready to make an offer.

FCInterNews say he put in a fine performance as Verona drew 1-1 with Inter Milan last weekend. With a United scout apparently present, the report says the club will join the race for the defender this summer.

Inter and Napoli are among the other clubs linked with Kumbulla, so Verona are hopeful of starting an auction to get around €25-30m for the defender.

United will travel to Derby in the FA Cup fifth round after they beat Northampton in tonight’s replay.

That means a reunion with Wayne Rooney, who scored the Rams’ fourth goal tonight.

Northampton threatened a comeback against Derby early in the second half, but Wayne Rooney’s men have restored their two-goal advantage.

This is great to see, as Dalot, Lingard and Shaw are using their time off to work on their fitness.

How Solskjaer has transformed United's academy

United are committed to continuing the flow of players from academy to first team.

It looks like United will be going to Derby as Duane Holmes makes it two against Northampton before the break.

The first goal of the tie between Derby and Northampton goes to the Rams.

United are heading to Pride Park if things stay the same.

Giggs tells Rashford why he would love to play with Cantona

Ryan Giggs has told Marcus Rashford how much joy he would have got from playing with Eric Cantona.

“He was just different. You see him there, look how big he is. People don’t realise how big and strong he was. He was like a target man but also he had them little touches.

“For you he would have been a dream. Because you know when you make those runs, he would always find you, and you wouldn’t have to break stride. You know sometimes in a game, you make runs, you make runs, but no-one’s finding you?

“As soon as he got the ball, he wasn’t interested in scoring - he wanted to score - but he got as much pleasure out of making assists. He was brilliant to play with.”

FA Youth Cup fever is taking over United this week. Marcus Rashford is the latest to get involved.

Remember, United discover their FA Cup fifth round opponents tonight, and Derby have named a strong team for their replay against Northampton.

Wayne Rooney captains the Rams, who will host United if they can beat their League Two opponents.

The trio signed last month, and go straight into the 25-man squad, which could be amended up to last night’s deadline.

United could be left light in the goalkeeper department this summer, as the Sun report that Sergio Romero and Lee Grant could be leaving Old Trafford.

Grant, 37, is out of contract, while Romero has been approached by Villarreal and Real Sociedad, the report says.

Dean Henderson and Joel Pereira are currently out on loan.

United have reportedly decided to prioritise the signing of Jack Grealish rather than James Maddison in the summer.

United are interested in both players, but Maddison is said to be close to signing a new contract at Leicester.

Now, the Mirror say United will focus on a huge summer bid for Villa captain Grealish.

Fernandes starts as he means to go on

This stat is extremely promising for United going forward, and shows another aspect of Bruno Fernandes’ game that made the club so keen to bring him in.

Ighalo told how many goals to make loan a success

If Odion Ighalo scores six goals between now and the end of the season, it would represent a success.

That is according to former Premier League goalkeeper Shaka Hislop, who was discussing Ighalo’s loan move with ESPN FC:

“Let me see, how many games to go this season? If he gets six goals I think that’s a success. Just under half [per game].

“Rashford’s injury might suggest as much but give [Mason] Greenwood a shot.

“It makes no sense as much as trying to figure out how many games he’s going to start and where those goals are going to come from.

Who United will face next in the FA Youth Cup

If United can beat Leeds tomorrow night at Old Trafford in the FA Youth Cup, a home tie with Wigan or Birmingham awaits in the quarter finals.

He’s a Premier League footballer with some time off, so naturally Daniel James is in Dubai.

What Lukaku learned from Ibrahimovic

And Lukaku has been speaking about how much he learned from Ibrahimovic when they were both at United (via SempreMilan):

“Ibra is a champion, I respect him. In Manchester I could train every day with him, that was the most beautiful thing for me,”

“It will be nice to play against him He is a great champion and professional.

“For me it’s normal that he can do those things at the age of 38. He works a lot; he always gave me advice when we played together in Manchester. He’s up there with Ronaldo.” 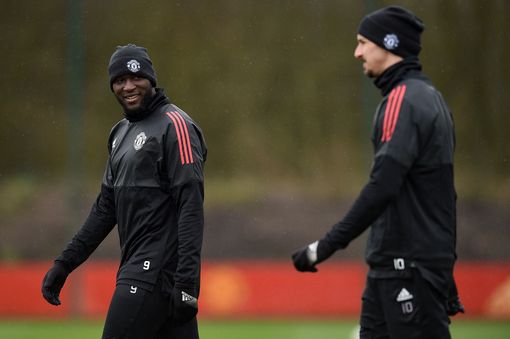 Di Maria on why he took the No 7 shirt

The Argentine has admitted he never wanted the No 7 shirt but the club wanted him to have it.

“I don’t really know. When I arrived, I saw that the number 11 was available,” Di Maria told Ligue 1 when asked why he took the No.11 shirt at PSG.

“It’s a shirt number I wore a lot when I was younger, and I was keen to get once again.

Ed Woodward has gone on the record a handful of times as Man United chief but has not gone on camera for a sit-down interview for nearly five years.

Read what he had to say here.

A look at how the United squad looks now the January window has closed.

United’s new signing has shared a picture of his boots on his Instagram page.

Maccabi entered the Champions League without 11 players due to covid. UEFA allows you to play if there are 13 players from the application
Ole Gunnar Solskjaer: De Gea saved us for years, Henderson did the same today. Lingard played well
The semed said goodbye to Barcelona: Thank you for the opportunity to realize the dream. Eternally grateful
Juve have leased Morata from Atletico for 10 million euros with the right to buy out for 45 million
Barcelona and Atletico have agreed a move for Suarez (Fabrizio Romano)
At the 1950 world Cup, Amateurs from the United States beat England. The coach of the Americans compared their players to sheep, and the author of the winning goal went missing
Dan Henderson made his debut for Manchester United at the age of 23. He made 141 appearances on loan
Source https://www.manchestereveningnews.co.uk/sport/football/transfer-news/man-utd-transfer-news-recap-17682936

Michael Bloomberg pays off $16m in fines to help 32,000 black and Hispanic felons vote in Florida

Coronavirus case at HMP Addiewell with contacts told to self-isolate