Following on from their dramatic 2-1 victory at the London Stadium on Sunday thanks to goals from Cristiano Ronaldo and Jesse Lingard, as well as David de Gea's last-minute penalty save, the two sides will face off again.

Ole Gunnar Solskjaer has already confirmed that Lingard will start the game.

"He’ll play, of course, on Wednesday because we will make a few changes," he said. "It was quite clear that he wants to fight for his place and want to be a part of a United team he feels is going places. For me, I can’t speak for Jesse now, but he is really contributing."

Regarding any more team news hints for this Carabao Cup fixture, it was confirmed on Tuesday afternoon that Anthony Elanga and Alex Telles will be named in United's squad to play West Ham - the latter has now successfully recovered from an ankle injury.

Follow the live blog below for all of the day's breaking United news.

Jose Mourinho is keen on a reunion with Diogo Dalot at Roma, according to reports.

The former United boss was the one who brought the full-back to Old Trafford from Porto in 2018.

CalcioMercato, via RomaPress, report that Roma are looking to make reinforcements in January and could offer a loan-to-buy deal for Dalot. 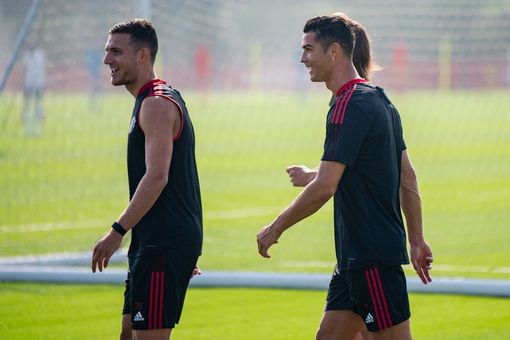 Manchester United intend to install floodlights and a new all-seater stand at their Carrington training complex as part of a much-needed facilities upgrade.

United's owners, the Glazers, have come under mounting pressure to invest in the training ground and Old Trafford, which have both lacked significant renovation over the last 15 years.

Following the collapse of the Super League, United co-chairman Joel Glazer vowed to supporters he would sanction overdue investment in the stadium and training complex.

United said planning applications have already been submitted for new floodlights and a stand that would house 500 spectators, a measure which would possibly end United junior teams' days of playing at Leigh Sports Village.

Elanga, 19, made his first team debut under Ole Gunnar Solskjaer against Leicester in May before he went on to feature in United's Premier League games against Aston Villa and Wolves and he also enjoyed an excellent pre-season for United this summer.

Despite making a stellar impression, Elanga has yet to play for United's first team this season, however, Solskjaer has now confirmed he'll be in contention to play against West Ham in the Carabao Cup this week, along with the returning from injury Telles.

Telles sustained an ankle injury in pre-season, but he could make his full return against West Ham, as confirmed by the United boss.

Valencia Cherysheva has not won 7 matches in a row
Ronald Koeman: I don't know if my future at Barca is in danger. We create chances, we play at our level, but in Spain this is not taken into account
Barcelona has 6 defeats and a draw in the last 7 matches with Madrid clubs in La Liga
Falcao on Barca's goal: I've never beaten her before. This victory means a lot to Rayo
Philippe Coutinho: We must return Barcelona to the top - to a well-deserved place
Sergi Busquets: Barcelona is not catastrophically bad. Everything is missing a little bit: good luck, faith
Barcelona lost to Rayo for the first time since 2002. The series of 14 consecutive victories was Interrupted

Budget 2021: How cigarette prices are impacted by today's tax hikes

Migrant dies after falling from dinghy during crossing to UK

Girl, 15, missing for a week after taking bus to Atlanta, sheriff says

My marriage to Shane Lynch nearly broke down during lockdown but here’s how we saved it, says Real Housewives star

Two boys, 15, arrested after teen stabbed in the street

Budget 2021: Rishi Sunak's promises and what they really mean for you

Back off! UK pulls rug from under Macron's Brexit fishing attack in brutally simple swipe

World’s first stamp to go on sale at auction – and it could fetch $8.25million

Expert's 12 simple tips to save hundreds on bills this winter

Halloween 2021: How to carve the perfect spooky looking pumpkin

Budget 2021: The winners and losers - from Universal Credit to drivers and drinkers