Manchester United beat Watford yesterday in the Premier League to move up to fifth in the table, just three points behind fourth placed Chelsea.

Ole Gunnar Solskjaer's side produced a professional display against Watford, winning 3-0 on a satisfying afternoon at Old Trafford. Bruno Fernandes won and converted a first half penalty to score his first goal for the club, before he turned provider for Anthony Martial to score a wonderful chipped effort in the second half.

Mason Greenwood made it three with a brilliant finish of his own - again set up by Fernandes - as United earned a morale-boosting three points. There was also positive injury news as Scott McTominay came off the bench to to make his return from injury.

United now turn their attentions to the Europa League second leg vs Brugge on Thursday.

Stick with us for all the latest United news throughout the day.

The centre back has been impressing in Italy and Roma want to make his loan move a permanent deal.

“The adaptation (to Italian football) was very easy for him. He’s a boy that everyone loves in the club because he is a great professional. I would like Chris to stay. We are speaking. I don’t know if it is possible because of the situation with Manchester United, but I would like so much for Chris to stay here with us because he is very important.

“He is a great player, a great man with a great attitude every day and for all of these reasons I would be very happy if Chris stays.”

Peter Crouch gives United reason to get excited about Fernandes

Fernandes impressed again and Crouch believes there’s a lot more to come from the 25-year-old.

“It takes a big character for someone to arrive at a club like United and instantly take on the responsibility of being their most creative player. But everything was going through Fernandes on Sunday and he was very comfortable with that,” Crouch said on MOTD 2.

“He was telling his team-mates what he wanted and he looks like a leader as well, so that is another thing he brings to the table that United needed.

“For his goal, I liked the fact that straight after he was fouled he was saying, ‘Give me the ball, I want the penalty’. And the way he took a little skip before casually stroking home the penalty was more proof that he has got a bit of arrogance about him. He was like a breath of fresh air.

“He has done all of this after joining in January too, and at a team who were not playing well and needed to sign someone to make an instant impact. He has definitely done that.

“Yes, it will have helped that he was playing well for Sporting before he made the move to England but he has still come to a different country and had to adjust to the Premier League. Despite all that, he has hit the ground running. It is true that it is not always the case that you have a harder time when you join a club in the middle of a campaign - I have experienced that for myself.

“You can have a honeymoon period at first and then the real work begins the next season when it can be a struggle because people expect more of you. I don’t think that will happen to Fernandes, though. We have seen glimpses of his quality but there is a lot more to come from him, and I think he will get better and better.”

It’s another Europa League week which means there will be press conference on Wednesday.

And an away trip to Everton on Sunday.

Bruno Fernandes reacts to his goal

The key talking points from Man United’s 3-0 victory over Watford in the Premier League fixture at Old Trafford.

Martial scored in all three of United games against Chelsea, Club Brugge, and Watford this week to take his tally for the season to 15, and is now just two off equalling his season-best tally.

Martial’s effort against Watford was an outrageous dink over Ben Foster following an impudent back heel to set up the angle that effectively clinched victory in the 3-0 win. Some United supporters had given Martial grief in the first-half after he ducked out of an aerial challenge and Solskjaer admits he is one of the Frenchman’s biggest critics.

“I am delighted with the week Anthony has had,” Solskjaer said. “He has got his critics and I am one of his biggest, priobably. I keep demanding different stuff from him.”

Made a good save from Abdoulaye Doucoure at 0-0 before United went on to take a half-time lead. Maintained his fine form. 7

More proactive in attack than he has ever been and should have crowned it with a goal but hit the side-netting. 7

Started dodgily and his errors caused unease to spread through the United defence. Much more composed after the interval. 6

Had a haphazard start where he almost gifted Troy Deeney a goal but was spared by Luke Shaw’s intervention. More secure in the second-half. 6

You can read the full story here. 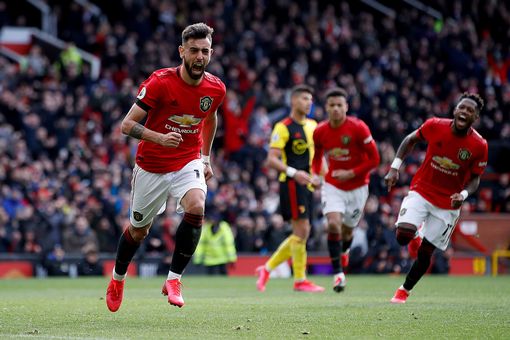 VERDICT: United mentality might finally be changing after Watford win

It is perhaps just as well Manchester United’s victory was not televised live in the UK when Anthony Martial’s goal should only shown after the watershed.

Ben Foster thwarted Martial initially, the ball spun into the Frenchman’s path just outside the six-yard box. Martial shifted, pondered, changed the angle with a deceptive drag-back, pirouetted and dinked the ball over a flummoxed Foster. After Jesse Lingard failed to master the chip with the game goalless at Vicarage Road two months ago Martial mastered it and scored again, as the song goes.

Some United supporters had given Martial grief for staying out of an aerial challenge and even his manager acknowledged there was a dormant period in Bruges. Martial was rebuked by Solskjaer at Chelsea, too. What all three games have in common is a Martial goal; all of them exceptional to varying degrees. Any centre forward worth their salt scores whenever they are not performing and Martial has 15 in a season he was sidelined for eight weeks.

You can read the full story here.