A thug who left a police officer with steel ball bearings lodged in his skull after shooting him three times in the face has been jailed.

Marshall Coe, 40, blasted Sergeant Dave Cayton with the metal pellet gun before pulling out a knife.

Despite being agonising pain, the officer was able to disarm the attacker and arrest him at the scene in Desborough, Northamptonshire, before backup arrived.

PS Cayton was rushed to hospital drenched in blood and he still has scars on his face to this day as result of his terrifying ordeal.

Coe was charged with wounding with intent and being in possession of a firearm with intent to cause fear of violence.

He was convicted at Northampton Crown Court and handed an 11 year extended sentence, with the custodial part set at eight years and eight months.

The court heard how PS Cayton was called to a property on November 20 last year to reports of a man with weapons. 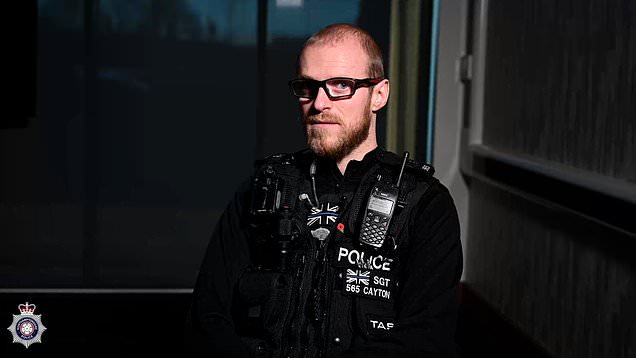 As the officer made his way upstairs Coe appeared holding a pistol and shot him three times in the face.

Recalling the attack, PS Cayton said: ‘The barrel of this weapon was directly pointed at my face and he started repeatedly firing the weapon at me.

‘I could vividly remember a loud crack of the weapon discharging and feeling an intense almost like burning pins and needles type pain at the top of my forehead.

‘At that point everything slowed down. The best way I can explain it is the fight or flight choice and I genuinely believe you don’t get to choose which one your body decides on.’

He instinctively decided to fight, pulling for his Taser and firing it, which he said had ‘zero effect’ on him.

PS Cayton added: ‘Other officers were already deployed at the same time I was sent to the incident, and they were en route but it felt like a lifetime and a lot longer than it actually was.’

However, Coe eventually managed to restrain him and put him in handcuffs beforeh is colleagues arrived.

PS Clayton told the arriving officers he was injured and bleeding but that he couldn’t tell where from.

He added: ‘It was only after I could realise exactly where I was hurting the top of my head was hurting my nose was hurting and I had been hit in the ear.

‘I have never been shot before I don’t know what it feels like and didn’t know the extent of the injures it was just relief that he was safely detained.

‘It sounds ridiculous when you’re being shot at but the thing that caused me the most fear was the fact that as he’s advanced towards me and runs out of ammunition he was holding a knife.

‘We know every day we’re potentially putting ourselves in harm’s way but that’s the point of the police to protect people.

‘It’s an occupational hazard nobody joins the police to be assaulted but we accept it may happen. I just feel very lucky not to be blind or potentially dead.’

‘Commendations such as these are only handed out in very special circumstances which really demonstrates the level of courage Dave displayed that day during this absolutely horrific incident.

‘I would walk through the gates of hell for my police officers and I will do everything in my power to protect them, including making sure that every instance of violence against them is pursued through the courts.

‘When I heard about this incident, it chilled me to my core and it mirrors the rising levels of violence we are seeing against police officers across the country as a whole.

‘This was a top investigation by our CID and eleven years is a great sentence.

‘It is also a real example that if you assault any of my police officers, we will come after you with the full force of the law behind us and do everything in our power to put you behind bars where you belong.’