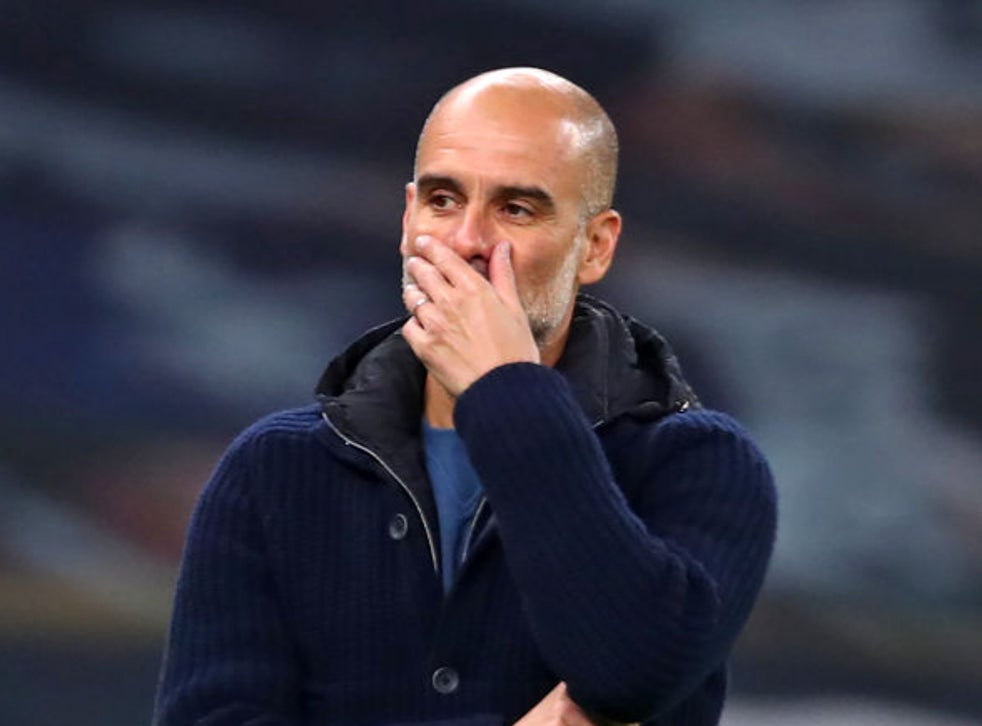 Pep Guardiola gestures on the touchline

Manchester City are hosting Fulham at the Etihad Stadium today as Pep Guardiola’s side look to build on their 5-0 thrashing of Burnley last weekend. Riyad Mahrez scored a hat-trick that day while Kevin De Bruyne looked his majestic best as City completely dominated and finally looked back to their best in front of goal, so it will be a tough challenge for Fulham this afternoon.

Scott Parker’s side do at least have their own confidence building win to look back on last weekend after successfully countering Leicester City to win 2-1. The Fulham manager will hope a similar blueprint here can inspire another huge performance from his side as they look to keep their heads above the relegation zone.

Follow all the action from the Premier League game at the Etihad Stadium live below, following the conclusion of Burnley vs Everton.

87 mins: Robbie Brady goes off with what looks like cramp. Josh Benson replaces him. There has never been a draw in the Premier League between Burnley and Everton. Are we heading for the first one?

84 mins: Huge save! Burnley win another corner and McNeil swings the ball into the middle of the box. Chris Wood wins the header and directs it towards the far bottom corner. Pickford sets himself and leaps, he gets two hands to the ball and pushes it wide!

81 mins: Dominic Calvert-Lewin is played in on goal after he heads a long ball to Richarlison. Calvert-Lewin only has Pope to beat but his shot is straight at the goalkeeper who keeps it out.

78 mins: A Burnley free kick on the left wing is whipped into the penalty area. Ben Godfrey wins the first header but only knocks it as far as Josh Brownhill. He puts the ball onto his left peg and shoots but Godfrey is out quick closing him down and he deflects the ball out for a corner.

75 mins: Burnley make a change and bring Ashley Barnes on for Jay Rodriguez. Can the proven partnership of Barnes and Wood get a winner for Burnley?

72 mins: Chris Wood falls awkwardly as he jumps over Andre Gomes to win an aerial ball. He hits the deck and stays down. The medics come and give him the once over and he’ll be okay to continue.

69 mins: Burnley’s corner is dealt with by Everton. Richarlison attempts to take on Lowton on Everton’s left wing. Lowton puts a leg in and takes the ball away from the striker. Richarlison goes down and Anthony Taylor lets play continue much to the 23-year-old’s frustration.

66 mins: Beautiful skill from Dwight McNeil. He picks up the ball in the central midfield but is forced wide by Allan and Iwobi. McNeil flicks the ball inbetween the two Everton men and darts past them and into the box. He crosses but Mina comes across to head it out of play.

60 mins: Keane feeds a narrow pass through the middle of the pitch to Rodriguez who quickly passes it out to Richarlison on the left. He comes into the box with the ball and plays a short pass to Doucoure. Brownhill nips in front of the Everton midfielder and boots the ball behind for a corner that comes to nothing for Everton.

Kier and Diaz may miss Milan's match with Bologna due to injuries
Gasperini on 3:2 with Lazio: It was fun, wasn't it? It seemed that the relegation complicated everything, but we scored
Jose Mourinho: Van Dijk cannot be replaced. Van Dijk can only be replaced by van Dijk when he returns
Mikel Arteta: Ødegård young but already played at the top level. It's great that Arsenal were able to sign him
Ex-Manchester United and Borussia midfielder Kagawa has joined PAOK
Thomas Tuchel: Chelsea will play bravely and in an attacking manner
Zoomers should be provided with exciting tournaments. In the top 5 leagues, there are 1,826 matches, in the Champions League - only 125. Agnelli on the future of football
Source https://www.independent.co.uk/sport/football/live/man-city-vs-fulham-live-stream-updates-b1766699.html