Not only are Bayern Munich continuing to chase Manchester City's Leroy Sane, new reports say they are considering a return for Pep Guardiola.

Edmund Stoiber, chairman of Bayern’s advisory board, told Bild: “There were discussions over Sane. The unfortunate injury and the surgery he required for it broke the deal up. We’ll see how things develop. As chairman of the advisory board... I have great faith in the sporting leadership. If they propose a transfer of this magnitude, that is justified.”

Bild also report Guardiola could return to manager-less Bayern, but goalkeeper Manuel Neuer would not be drawn on the speculation, saying: "Of course, I can't comment on the rumours. I hear [about Guardiola] for the first time. You will see what happens and how those responsible decide."

Meanwhile, Bernardo Silva has been given a one-match ban for his tweet about Benjamin Mendy.

The missing Man City partnership that can change the league table

Manchester City are nine points off the top of the Premier League table but have shown they can put together a winning run.

In 2017 they embarked on 18 consecutive wins to blow all opponents out of the water on their way to a record-breaking 100 points . The following year the final touches were being added to Liverpool’s coronation in January before the Blues won their last 14 matches to overturn a seven-point deficit and do something no other team had managed in a decade: retain the title.

Looking at those two winning runs, what becomes clear is not only that Guardiola used a variety of centre-back pairings but that he gravitated towards two of them more than any others. The season is long and with four competitions it is not possible to be successful without using all of your resources intelligently. 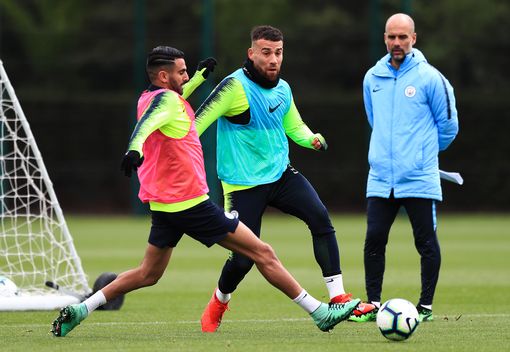 The FA Regulatory Commission felt that Bernardo Silva had to be given a playing ban for breaching social media rules - but stopped well short of the six that was feared by some.

The 25-year-old landed himself in hot water after tweeting a picture likening Manchester City teammate Benjamin Mendy to a controversial caricature cartoon character used to promote Spanish chocolate brand Conguitos and while it was swiftly taken down it had already been highlighted across social media.

Bernardo admitted that his post counted as an aggravated breach of FA rules because it “includes a reference whether express or implied, to any one or more of the following: ethnic origin, colour, race, nationality, religion or belief, gender, gender assignment, sexual orientation or disability.”

Because it emerged on social media, the Regulatory Commission did not have to impose a minimum of a six-game ban and could instead decide what they felt was appropriate.

Rose reveals how Sterling has reacted to England punishment

Danny Rose believes the England camp is back to normal after tempers flared between Raheem Sterling and Joe Gomez.

The pair came together in a flashpoint towards the end of Manchester City’s defeat to Liverpool on Sunday, and Sterling did not believe the matter to be settled when they met again in the England team canteen 24 hours later.

His actions towards Gomez have cost him the chance of representing England at Wembley tonight in their 1,000th game after Gareth Southgate opted to punish the 24-year-old.

However, Tottenham left-back Rose ate with Sterling and feels the City forward is in a good place after apologising to Gomez and the rest of the squad.

Ole Gunnar Solskjaer: I Think it was a penalty against Aston Villa
Philadelphia played in t-shirts with the names of black people who died at the hands of the police
Kompany tries everything at Anderlecht: he coached without a license (terrible), played 15 matches and invested 3 million euros in the club
Aston Villa coach on Manchester United penalty: A shameful decision
Paul Pogba: Winning the Europa League and the FA Cup are two of Manchester United's goals for this season
Manchester United's first ever Premier League win 4 consecutive games with a difference at least 3 goals
Brunu has scored 7 (4+3) points in his last 3 games for Manchester United
Source https://www.manchestereveningnews.co.uk/sport/football/transfer-news/man-city-news-transfers-live-17250615