CHRISTIAN B was a twisted loner at school who was hated by all the other children, a former classmate has revealed.

The Madeleine McCann murder suspect spent his days annoying the other children and getting into a string of fights.

He also goaded teachers but then laughed in their face when they reacted, the former pupil revealed.

He told The Sun: “I have only ever had one fight in my life – and that was with Christian B.

“One day I exploded and told him I wished he would go back to the children’s home from where he had come from.

“We all knew he was adopted, so I shouldn’t have said that but I lost my temper with him.

“He jumped on me and we traded punches until a teacher pulled me apart.

“Everyone hated him in class and they all kept their distance.

“But it wasn’t just the children – it was the teachers as well.

The dad lost touch with B in his mid-teens – and was stunned when he heard his former classmate was linked to the Maddie case.

He added: “I always knew he would turn out bad but it is unbelievable to think he might be involved.

“I just hope the case is resolved to give closure to those poor parents.” 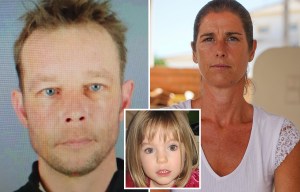 Paedophile B went on to commit his first sex attack on a six-year-old girl in a playground in 1993 — when he was 16.

He fled when the girl screamed in terror, but moments later he performed a sex act in front of another girl, aged nine.

Police have now named the jailed sex offender as the prime suspect in the 2007 abduction of Madeleine McCann from Praia da Luz on Portugal's Algarve.

Sterling on the record for goals in a season: we Want to win the Champions League and the FA Cup, otherwise they won't mean anything
Sheffield will finish the Premier League season without defeats from clubs from London. 22 points in 10 games and 5 home wins
Bonucci on Juve's draw with Atalanta: We must look at the result. This is how Championships are won
Sterling surpassed Yaya Toure to become Manchester City's 2nd goalscorer in the history of the Premier League
Gasperini on two penalties for Juve: They are above any rules in Italy. Did we have to cut off our hands?
Sarri Pro 2:2 with Atalanta: We played with one of the best teams in Europe right now
Pep Guardiola: Manchester City have won a place in the Champions League on the pitch. I hope that UEFA will allow us to play
Source https://www.thesun.co.uk/news/11801157/madeleine-mccann-christian-b-loner-hated-classmates/