DETECTIVES have revealed key new evidence in the probe into the disappearance of  Madeleine McCann including a mystery phone call one hour before she was last seen and a camper van the prime suspect was living in.

Metropolitan Police chiefs tonight revealed a German prisoner, 43, has been identified as a major new suspect in the case 13 years after Madeleine disappeared in Portugal in May 2007.

Among the bombshell findings is a 30-minute phonecall the man, who hasn't been named, took just one hour before the three-year-old is feared to have been snatched from her bed.

Cops said they were taking the "really unusual" step of releasing two mobile phone numbers as part of the appeal to try and find Maddie.

Doing regular checks on the children, Maddie's dad Gerry found nothing amiss when he looked in on the youngsters just after 9pm at their holiday flat.

Scotland Yard said tonight he has been linked to a 1980s white caravan with yellow skirting that was registered in Portugal and pictured in the Algarve in 2007 in another bombshell development.

Cops say he was driving the vehicle in the same town just days before Madeleine vanished and is believed to have been living in it for days or weeks before and after the date of her disappearance.

German police have said there are indications "he could have used one of these vehicles to commit the crime" as they linked the suspect to the disappearance.

The German lag - in prison on an unrelated matter - has also been linked 1993 Jaguar XJR6 with a German number plate seen in Praia da Luz and surrounding areas in 2006 and 2007.

THE FIRST of the vehicles linked to the new German suspect is a 1993 Jaguar XJR6.

The car has a German number plate and was seen in Praia da Luz and surrounding areas in 2006 and 2007.

The car is described as "dark red" in colour and has been seized by cops.

On the day after Madeleine went missing, the suspect got the car re-registered in Germany under someone else's name.

However, it is believed the vehicle was still in Portugal.

German cops have said they believe the man was using the vehicle at the time.

Anyone who is believes they may have seen the Jaguar is urged to contact police.

On May 4, 2007 - the day after Madeleine vanished - the man got the car re-registered in Germany under someone else's name although it is believed the vehicle remained in Portugal.
German police have seized both vehicles and described the major new prime suspect as white with short blond hair, possibly fair, and around 6ft tall with a slim build.

German cops are treating Maddie’s disappearance as a murder inquiry - though the Met are still investigating the case as a missing person inquiry.

The man emerged as a “significant” suspect following a vital breakthrough in the case from a witness who came forward following a 10th anniversary appeal by the Met for information in 2017.

The man was already known to British and Portuguese cops investigating the case.

DETECTIVES are appealing for information about two mobile phone numbers – the suspect’s own phone and another person’s he spoke to the night Maddie vanished.

DCI Cranwell said: “Extensive enquiries have led investigators to believe the suspect was using this number and received a call, starting at 7.32pm and finishing at 8.02pm on 3 May 2007.

“This call was received in the area of Praia da Luz.”

DCI Cranwell said: “This number is the phone number that made this call. We know the person was not in the area of Praia da Luz.

“Investigators believe the person who made this call is a highly significant witness and are appealing for them to get in touch.
“The Operation Grange team is also asking anyone if they recognise these numbers.

German police have seized both vehicles and described the prime suspect as white with short blond hair, possibly fair, and around 6ft tall with a slim build.

Scotland Yard is now launching a joint appeal with the Federal Criminal Police Office of Germany (BKA) and the Portuguese Policia Judiciaria (PJ) - with a £20,000 reward for information.

The Met's £12million Operation Grange probe into the disappearance has identified more than 600 potentially significant suspects.

They were tipped off about the major new suspect, who was already known to police, following an appeal for information in 2017 - ten years after Madeleine vanished.

A statement from Madeleine's parents, read by Det Chief Insp Mark Cranwell said: "We welcome the appeal today regarding the disappearance of our daughter Madeleine.

The breakthrough - revealed in a press conference by Scotland Yard tonight - could be the biggest leap forward in the £12million investigation so far. 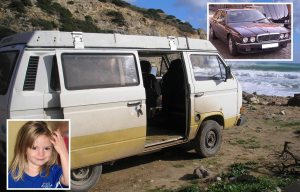 Maddie disappeared from her holiday apartment in Praia da Luz, Portugal, while her parents Kate and Gerry enjoyed tapas with their friends nearby.

When Kate returned to check on Maddie and her twin siblings Sean and Amelie at around 10pm that evening, she discovered the youngster was not in her bed.

Despite a 13-year search for the missing girl and countless conspiracy theories and potential suspects, no trace of Madeleine – who would now be 17 – has ever been found.

Marcelo will miss the rest of the season in La Liga due to an adductor muscle injury
Telephone Interview, disinfection of the rails, the ban lifts. We checked-antivirus measures in the NPL really work (well, almost)
David De Gea: I hope to play 400 more games for Manchester United
CAS returned to PAOK 7 points. AEK Carrera may not qualify for the Champions League
Pep Pro Champions League: Real Madrid will knock us out if Manchester City are thinking about the next stage
Quique Setien: Barcelona can keep their title chances until the last round. A lot of things happen in football
Klopp confirmed that Henderson is out for the rest of the season due to injury
Source https://www.thesun.co.uk/news/11777248/madeleine-mccann-suspect-evidence-campervan/

Why has the United Kingdom nominated Liam Fox for a job he's never going to get?