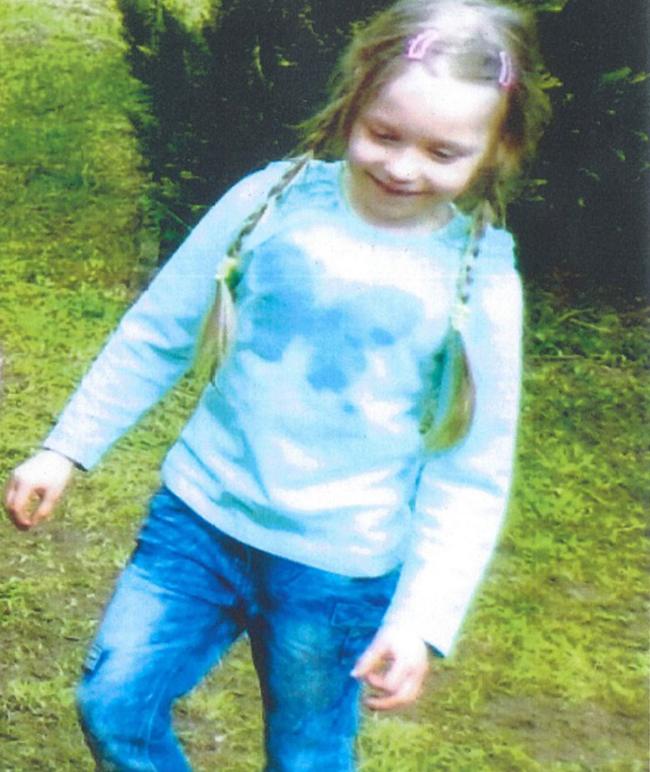 After morals panics, conspiracy theories and hundreds of journalists typing the words “every parent’s worst nightmare”, we are now invited to wonder if Christian Brueckner kidnapped and murdered her. And maybe he also kidnapped and murdered a child in his native Germany, a girl called Inga Gehricke. The tabloids leads with the story.

Inga appeared on these pages in 2015. A child killer named Silvio S had been arrested in connection with her disappearnce. But he had nothing to do with Inga’s vanishing from a family trip to the woods in Wilhelmshof. The Sun told readers Inga is known as “The German Madeleine”. As we’ve noted, every country seem to have a version of the missing child. Madeleine McCann is the media’s benchmark for all the world’s missing children:

Brazil has an Our Maddie – Madeleine McCann: Isabella Nadoni Is Brazil’s Our Maddie

Israel has an Our Maddie– Madeleine McCann: Israel’s Rose Is The International Our Maddie

South America has an Our MaddieA Madeleine McCann Found In Panama

Holland has an Our Maddie – Madeleine McCann: Milly Boele Is Holland’s Our Maddie

What else Inga Gehricke and Madeleine McCann have in common is made plain in the Daily Mail: they are both blonde: 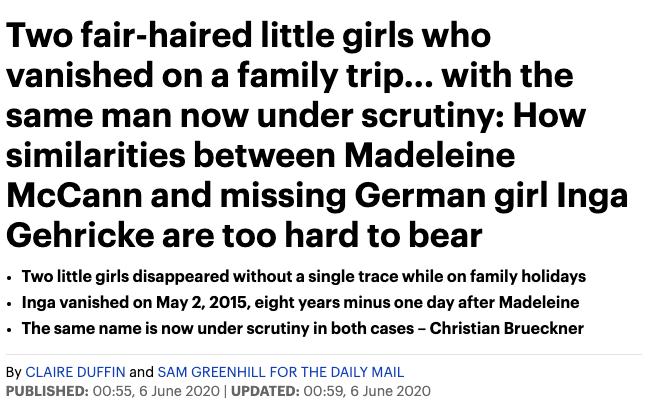 It was Madeleine McCann’s blondness that helped turn her into the media’s ‘Our Maddie’, Would a black child have been news for 13 news, his or her face on the national newspapers’ front pages? No need to answer. The answer is ‘no’. Aref Ismaili has been missing since April 4, 2016. He had fled from Afghanistan to Germany under adverse circumstances with his parents. Aref Ismaili vanished in the small town of Wanfried in Hesse, Germany. His face is not familiar to people the world over.

This is news as much as it is entertainment. Take this story also in the Mail: “Luxury villa where new Madeleine McCann suspect Christian Brueckner raped a 72-year-old US tourist is just a ten minute walk from apartment where the toddler vanished 18 months later.” The circumstantial nature of the link is clouded further by pictures of the luxury villa (price on application). Again the Mail notes Inga’s “blonde hair and blue eyes”.

In 2017, Jens-Uwe Gehricke recalled in German media how he’d seen his daughter Inga shortly before she disappeared on the footpath that leads from the friends’ house to the barbecue area on the edge of the forest. Inga was carrying two large bottles of water. She wanted to help prepare for a barbecue. Shortly afterwards, two other children watched her again as she made her way back home. That was around 6:30 p.m. Nobody knows what happened then. Said Jens-Uwe Gehricke: “It was only 100 meters to the house. But it never got there.”

If we’re looking for links why not look at the vanishing of six-year-old René Hasee. Eleven year before Madeleine McCann disappeared, the six-year-old from Elsdorf, Germany, was on a summer holiday with his family in Aljezur, not far from Praia da Luz when he disappeared. René Hasee is blond, so we may well hear of him in the British tabloids before any mention of Aref.

Pellegrini was headed by Betis. The contract is until 2023
Paul Pogba: Manchester United must always strive for progress and not feel satisfied with what they have achieved
Messi can say: Barca need a new President and coach. Leo has a red button, but he doesn't press it. Source The Athletic on the player's influence at the club
Klos from Arminia played for Amateurs until the age of 25, boozed on weekends, and is now ready to compete with Levandovsky
Van Persie has named three favourites for the Golden ball: Lewandowski, de Bruyne and mane
Hazard worked in the General group before Alaves. Zidane can include him in the squad
Luis Garcia: Messi shows something new every year. I can easily imagine that he will play until 2025
Source https://www.anorak.co.uk/462154/tabloids/madeleine-macann-christian-brueckne-blonde-inga-gehricke-but-not-darker-aref-ismaili.html