Boris Johnson has discussed Brexit with Brussels officials in Jean-Claude Juncker’s home country of Luxembourg. Following the meeting, Luxembourg’s Prime Minister went on a rampage about Brexit during a press conference, saying he “deeply regrets” the decision. Mr Johnson was absent from the press conference, leaving an empty podium.

In an impassioned speech, Mr Bettel raged: “People are trying to blame others because they can't find an agreement. It is not up to the UK to decide what the future relations will be with the EU.

“Don't make it like the European Union is the bad guy - Theresa May accepted them - it's not Europe's fault.

“These are homemade problems - I won't accept any responsibility for the mess we're in at the moment.’

He added: “So the meeting with Mr Johnson was longer than planned, we exchanged about the different positions of the UK Government. 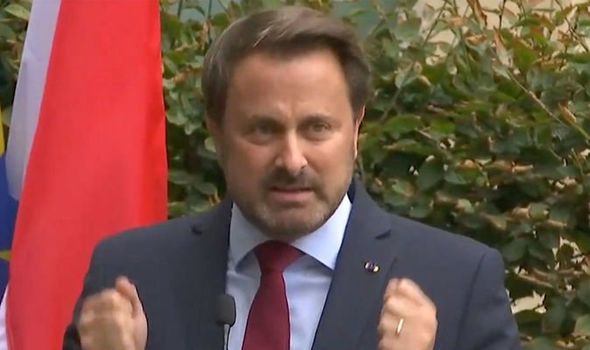 “But I repeat, I hear a lot that I don’t read a lot. If they want to be able to discuss about anything, we need it on the written side.

“But for the moment, I just have one written deal. I repeat, this Brexit, it’s not my choice.

“But don’t put the blame on us because now they don’t know how to get out of this situation they put themselves in. It’s not my choice.”

During their two-hour working lunch, Mr Johnson and Jean-Claude Juncker failed to make a Brexit breakthrough, according to the European Commission.

The EU chief said it was the UK's responsibility for delivering "legally operational solutions that are compatible with the Withdrawal Agreement". But he said he would continue to work with Mr Johnson to find a solution.

Downing Street released the following statement after today's lunch time meeting: "The Prime Minister and President Juncker had a constructive meeting this lunchtime. The Brexit secretary [Stephen Barclay] and Michel Barnier [the EU’s chief Brexit negotiator] were also in attendance.

"The leaders took stock of the ongoing talks between the UK’s team and taskforce 50. The Prime Minister reconfirmed his commitment to the Good Friday/Belfast agreement and his determination to reach a deal with the backstop removed, that UK parliamentarians could support.

"The Prime Minister also reiterated that he would not request an extension and would take the UK out of the EU on the 31st October. The leaders agreed that the discussions needed to intensify and that meetings would soon take place on a daily basis.

“It was agreed that talks should also take place at a political level between Michel Barnier and the Brexit secretary, and conversations would also continue between President Juncker and the Prime Minister."

The meeting comes after an EU diplomat appeared to mock the Prime Minister after he likened himself to the incredible Hulk.

Mr Johnson said “the madder Hulk gets, the stronger Hulk gets” in an interview with the Mail on Sunday, where he threatened to ignore legislation ordering him to seek a second extension of Article 50 if no Brexit deal is reached by October 19.

But one EU diplomat mocked the idea that Mr Johnson was the fictional superhero, instead likening the Prime Minister to the fairytale villain Rumpelstiltskin.

The diplomat told Politico: “Seen from the Continent, the UK Prime Minister seems less of a Hulk and more of a Rumpelstiltskin.”

Spartak is going to withdraw from the RPL because of the refereeing – your reaction?
There are 2 cases of coronavirus in Atletico. The match with Leipzig – August 13
Renzo Ulivieri: Pirlo is one of the most profound thinkers of world football. He knows more than most coaches
Pirlo wants to sign Tonali at Juve. Alternative – Locatelli
Before the match with Real Madrid, sterling watched a video of the defeat by Tottenham in the 2018/19 Champions League
Andrea Pirlo: I am Flattered to have received such respect and trust from Juventus
Former Manchester United midfielder angel Gomez has moved to Lille. He will spend the season on loan in Boavista
Source https://www.express.co.uk/news/uk/1178682/Brexit-news-latest-Boris-Johnson-speech-Luzembourg-talks-EU-today-Xavier-Bettel?utm_source=feedburner&utm_medium=feed&utm_campaign=Feed%3A+daily-express-news-showbiz+%28Express+%3A%3A+News+%2F+Showbiz+Feed%29