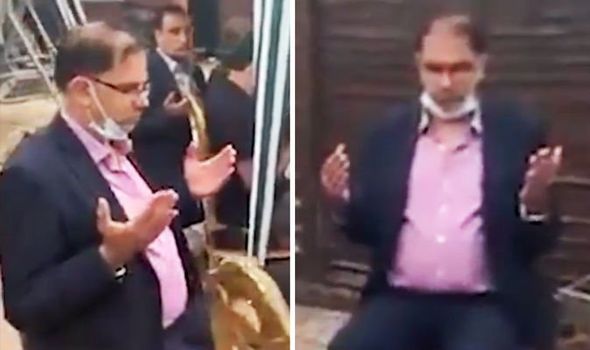 Luton's mayor has resigned from his position (Image: EXPRESS)
Make the most of your money by signing up to our newsletter for FREE now

Cllr Tahir Malik was caught on camera at a packed garden party with at least 12 others last month. He and at least two other councillors who appeared in the video posted online were forced to apologise. Now, he has announced he is quitting his role.

Mr Malik said: "Once again I regret my actions which were below the standard of my position and would like to sincerely apologise to the people of Luton for attending this gathering which was in breach of Covid-19 lockdown restrictions.

"There is no excuse for what I did – I should have known better and I accept full responsibility for my actions."

The garden party was held in Luton on July 21 - days before the town was named as an "area of intervention" due to the rise in the number of fresh COVID-19 infections.

In one snap he can be seen sitting at a table with a face mask hanging around his neck while failing to keep two metres away from other party-goers.

All attendees at the gathering appear to be men.

Luton Borough Council conducted an investigation after the Daily Telegraph released the video of the party in which the mayor could be seen breaking social distancing rules.

This is a breaking news story... More to follow...

Bartomeu - Suarez: I want to organize a farewell match. Barcelona will always be your home
Arsenal are Interested in Jorginho
PSG refuse to rent Allie because of the excessive demands of Tottenham
Lopetegui about Bavaria: Such a team has not been in Europe for many years
Angel Di Maria: Ronaldo is a beast. It is incredible that he is fighting with Messi, being less gifted by nature
Gotze on the wrong decision to return to Borussia: Things didn't go as I expected
Fans thought it was absolutely sensational that a football player could get on a train. And partly because he could read. Norwegian from the Premier League destroys myths
Source https://www.express.co.uk/news/uk/1319120/luton-news-luton-mayor-tahir-malik-resigns-coronavirus-lockdown-rules?utm_source=feedburner&utm_medium=feed&utm_campaign=Feed%3A+daily-express-news-showbiz+%28Express+%3A%3A+News+%2F+Showbiz+Feed%29