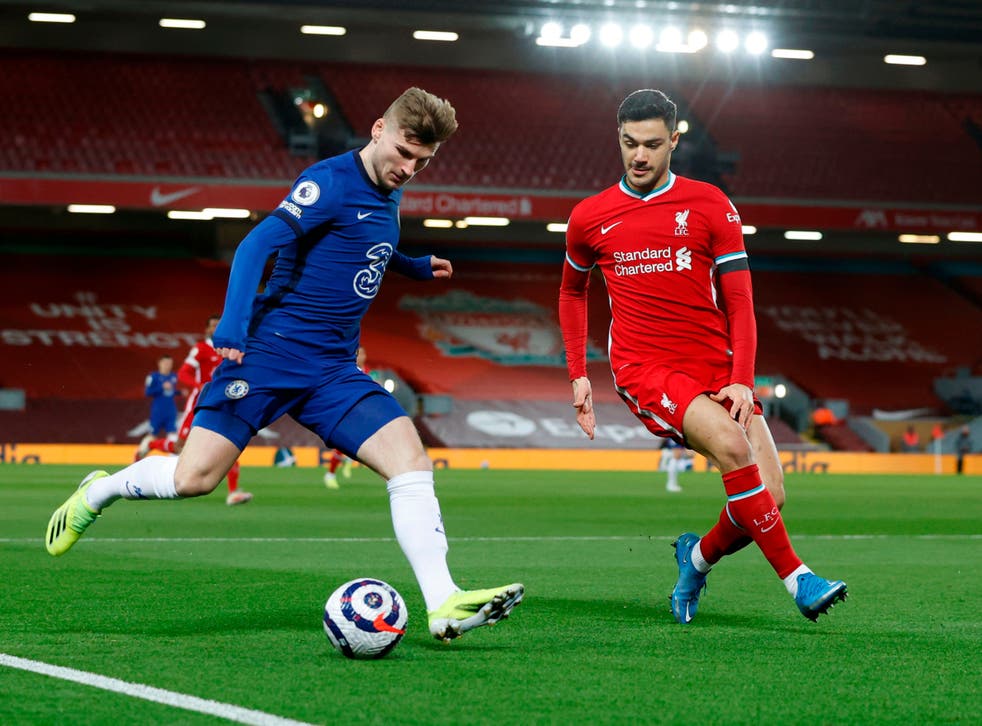 Kai Havertz and Timo Werner inspect the pitch at Anfield

Liverpool welcome Chelsea to Anfield this evening as both sides look to move up to fourth place in the Premier League table. Liverpool enter the fixture sixth in the standings on 43 points, while visitors Chelsea are one point and one place ahead of their hosts tonight.

The encounter also marks a meeting of German head coaches in Liverpool’s Jurgen Klopp and Chelsea’s Thomas Tuchel, who succeeded his compatriot at both Mainz and Borussia Dortmund in the Bundesliga. Chelsea are undefeated since Tuchel joined in January, though their encouraging domestic form gave way to two draws in their last two top-flight outings, against Southampton and Manchester United. Liverpool, meanwhile, had lost four in a row in the Premier League before ending that dismal run last time out by defeating bottom Sheffield United.

This clash with the English champions, whose title is essentially out of their grasp now, marks another test for Tuchel’s Chelsea, though the Blues have performed admirably in other matches that have appeared their most difficult since the German’s arrival – with victories over Tottenham and Atletico Madrid preceding the goalless draw with Man United. Follow live updates from Liverpool vs Chelsea at the conclusion of Fulham vs Tottenham.

21 mins: Chelsea come at Liverpool again, this time down from the left wing. Ben Chilwell carries it into the box before sliding a pass to Werner on his left. Werner sends a lovely cross into the six-yard box but can’t pick out a teammate and Liverpool clear.

18 mins: Werner fails to beat Alisson as the ball comes into the box from Azpilicueta on the right. Werner is onside and tries to dink the ball over Alisson but the Liverpool goalkeeper stands tall and clings onto the ball.

15 mins: Andy Robertson makes a run in behind as Liverpool play the ball over the top again. Mendy is on top of it and tidies up for Chelsea. Both teams are so compact it’s quite tough to play the ball through the middle.

12 mins: At the other end Timo Werner brings down an aerial pass, turns and hits a shot on the spin but fires it wide of the right hand post. Good chance for Chelsea.

9 mins: Trent Alexander-Arnold chips a ball into the Chelsea penalty area. Sadio Mane darts in front of Andreas Christensen to win the ball and is hit by the defender’s outstretched leg. He stays on his feet and runs the ball out of play but if he’d gone down it would have been a decent shout for a penalty.

6 mins: Roberto Firmino slots a lovely ball over the Chelsea back line and Mo Salah bursts in between the centre-backs to run it down. Chelsea’s goalkeeper Edouard Mendy sprints out of his box and beats Salah to the ball before booting it long back down the pitch.

3 mins: Timo Werner carries the ball into the right side of Liverpool’s box but his ball into the middle is blocked by Fabinho who slots back into the centre-back role tonight for Liverpool.

Kick off: Chelsea kick off the game. A spot in the top four awaits whichever team wins this one tonight.

The teams head out onto the pitch at Anfield. Liverpool could win five successive league games against Chelsea for the first time since 1972/74. Chelsea have won just once in the last 12 league meetings, drawing five and losing six. The Blues have lost 23 Premier League fixtures versus the Reds, more than against any other opponent.

Ferdinand on Super League: This is a war against football, a disgrace. A closed institution for big shots. This is just business
Is this what our dream changes look like?
Sanya about the Super League: I'll finish watching football. This is not the football I know
Juventus about the Super League: The clubs will receive 3.5 billion euros, but now we can not guarantee that the project will be implemented
Neville on Super League punishment: Huge fines, points deduction, take away their titles, who cares? Let them fly out
The Super League does the impossible: it brought together UEFA, FIFA, the Premier League, La Liga, Ferguson, Tebas, Macron and Pryadkin. They are all against
The Super League clubs have informed UEFA and FIFA about the appeal to the courts. This is a defense against attempts to disrupt the tournament